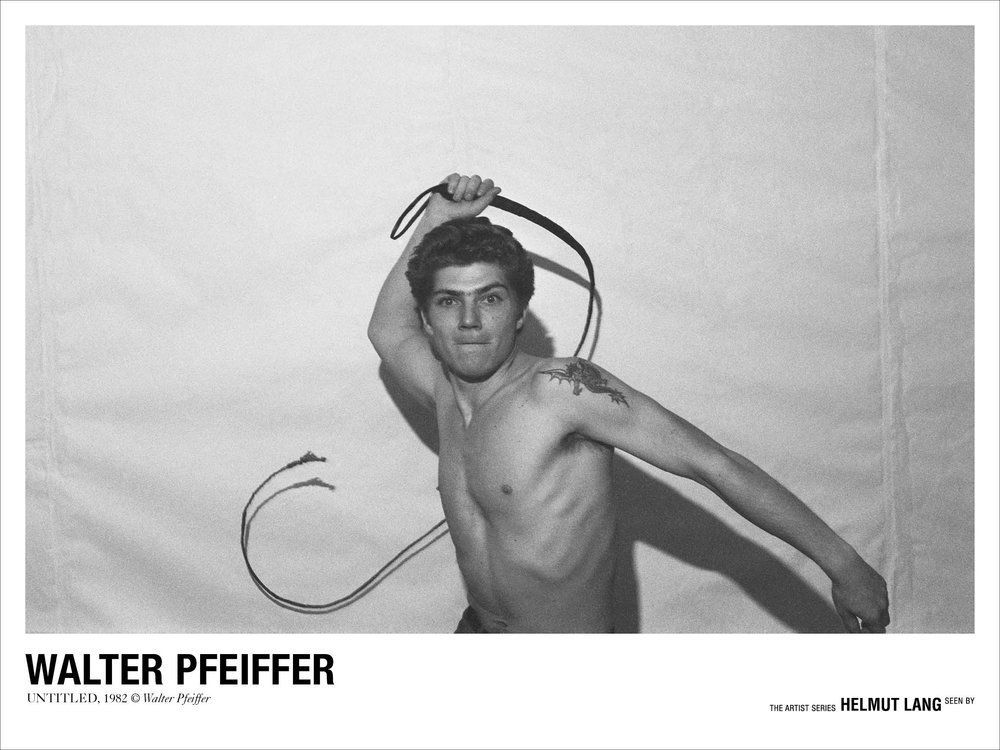 INSPIRED BY HELMUT LANG’S LEGACY OF ARTIST COLLABORATIONS, THE ARTIST SERIES UNCOVERS AND RECONTEXTUALIZES CULT ARTWORKS FOR A NEW GENERATION.

HELMUT LANG EDITOR-IN-RESIDENCE ISABELLA BURLEY HAS SELECTED TWELVE ARTISTS FOR THE SERIES, WHO ENCAPSULATE THE SPIRIT OF HELMUT LANG THEN AND NOW.

WALTER PFIEFFER SHARES HIS INSPIRATIONS BEHIND THE IMAGE SERIES. TEXT BY MAYO DAVIES.

“His name is René and I did a lot of great things with him, including a play featuring him and a girlfriend of mine. He worked in dentistry and has a print of my lips in orthodontic clay. We did a kissing picture that’s in my book Welcome Aboard – I put the camera on the shelf and that was it. You wouldn’t know if an image was good until days later and that was so thrilling. That’s why I love analogue photography. But this era is gone. I bought the whip from a fairground that had a merry-go-round. I thought ‘I’ll take it!’.

I always had props with me and I’d let the models play – you can’t do the same picture with every boy because they are complicated. I’d never used a whip before in my photography. Or since – it never works if you repeat an idea again. I come from the classical and studied the Greeks at school. I’ve always been fascinated by things that last longer, I want my pictures to survive and stay special.

On the contact sheet it was only five or six clicks. I even showed it to my mentor, a teacher of mine and he told me it was good. I like people telling me what’s good because I’m too close into it.” “I’d been shooting colour but because of budget I had to print monochrome for my first book Walter Pfeiffer: 1970–1980. So I started photographing in black and white. I call them ‘The Budget Years’ but they were so-called ‘Golden Years’ too. It was the mid 80s. The models came and brought hair clippers, which they used to cut their hair and even mine. T he boys dyed their hair blond and went straight up: ‘buzz!’ It was a popular style.

In the picture he’s happy, even proud. Another model learning to cut hair did it. I said ‘show me from behind’ and that was it. I don’t think too much, because if I do, it’s gone. You have to train your eyes and mind to be quick. Models would bring me cassettes – ‘you should listen to this!’ – and I’d let the music play. This was the time of nightclubbing. I still have them, but I’m not nostalgic as I like to hear the new, the beat of now. I can always go back to the classics.

The photo was discovered going through my archive for the Fotomuseum Winterthur exhibition (2008) and is only in my In Love with Beauty book.” “The model told me about a trick he could do. He said ‘look at this and take a photo’. I sighed and pressed the button – ‘Do I have to photograph this?’ Then I forgot it. It was one frame. When I did the Welcome Aboard book I found it. I hadn’t seen anything like it before. Now I’m so happy that I did it. Models can feed you with ideas and you have to indulge them. I’m still like this. You have to be patient and always ready for the moment. They were always training to do something else or doing something else, found from the street or through friends. I like natural models, who haven’t learned to pose. What I like is that they don’t care. It’s always the same age I’m interested in, 20 or 25, these young, exploding people.

This picture was shot at my home in Zürich. I never had a studio because I hated those photographic lamps, I didn’t want those things around me. I never bought all the professional equipment.”