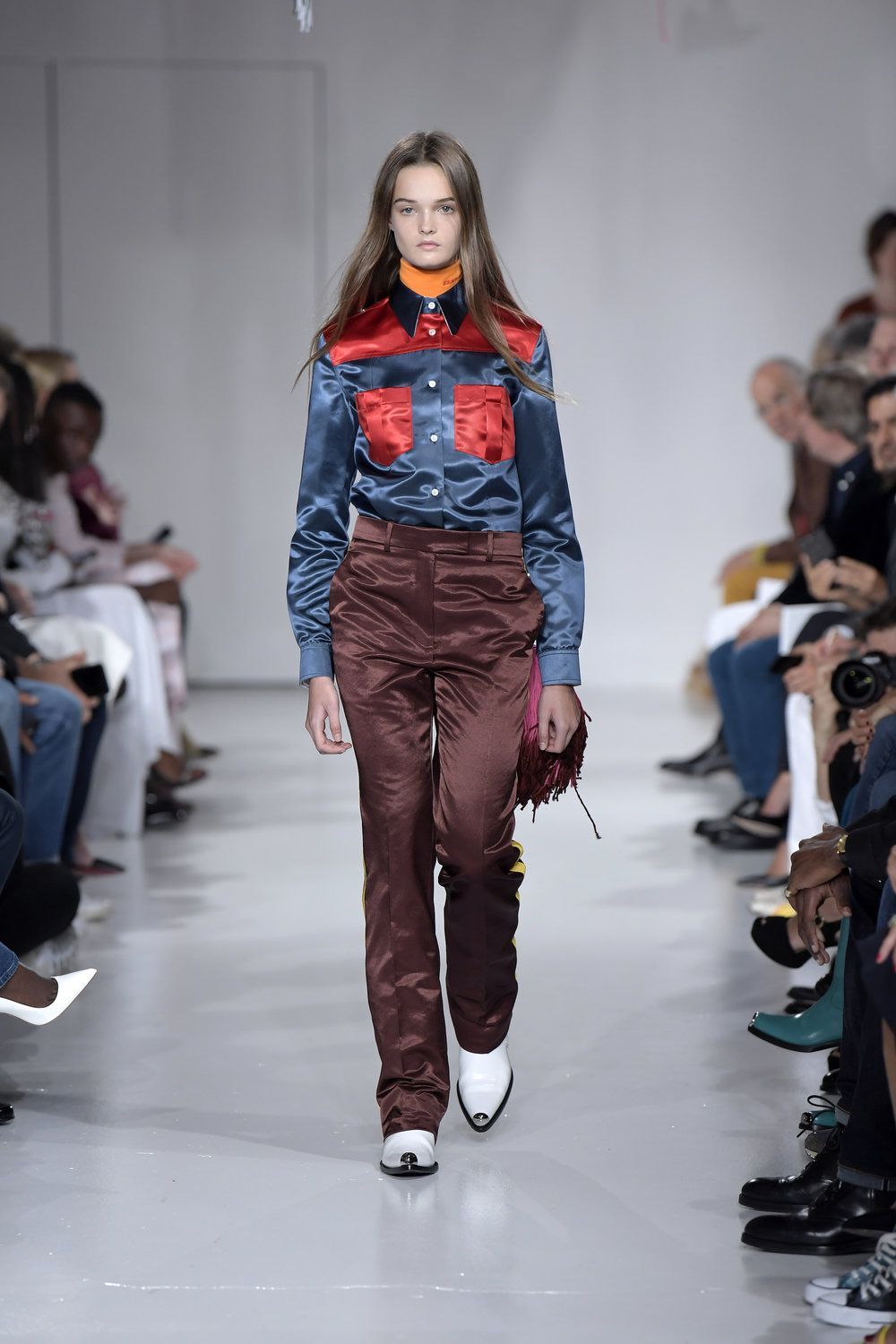 The Spring 2018 CALVIN KLEIN 205W39NYC collection takes its inspiration from cinema, from the dream-factory of Hollywood and its depictions of both an American nightmare, and the all-powerful American dream. Thriller heroines, heroes and antiheroes. The aesthetic codes of movie protagonists are endlessly remixed, their meanings given new interpretation and celebration.

Drawn from the same source material, but created separately, artist Sterling Ruby’s site-specific installation for the Spring runway show underscores these themes. The work uses as its base the installation from the Fall 2017 show, just as the collection builds on the foundation established by its predecessor – a new wardrobe, of American archetypes.

The “clues” of horror, but also of dreams, inspire the collection. Here, there is never any horror without beauty. Cinema’s distinct visual vocabulary of symbols and signs, is cut-up, recontextualized and reassembled, to create a plurality of dress. Multiple signifiers of the tropes of thrillers are combined in single outfits, creating new assemblages. They are ‘edited’ – like a movie – to define a fresh narrative.

Fishnet, silk slips, rubber against skin. These reference a corporeality that speaks of both sexuality and mortality. The lineage of these movies can be traced back to urban myths, to puritan cautionary tales warning adolescents of the perils of moral transgression and the dangers of youthful sexuality – and the history of CALVIN KLEIN is tied up with transgressive sexuality.

The quintessence of CALVIN KLEIN’s identity can be discovered, again and again. Like these movies, CALVIN KLEIN is also an American institution, a symbol in and of itself. It reflects one facet of that always-inspiring American Dream. A pair of the brand’s iconic perfume bottles – ETERNITY and OBSESSED – become totemic charms, hanging from belts and handbags like tools, weapons or trophies.

In exploring America, Raf Simons found Andy Warhol – an artist whose work has helped define both the contemporary identity of American culture, and also the world’s perceptions of it. In a unique collaboration with The Andy Warhol Foundation for the Visual Arts, this collection incorporates a selection of Warhol artworks as placement screen-prints. The pieces feature portraits of Warhol intimate and art collector Sandra Brant (1971) and the movie star Dennis Hopper (1971). The latter wrote, directed and starred in the film Easy Rider (1969), which has come to define contemporary notions of American machismo. The curation also includes Knives (1981-2), Electric Chair (1964-65) and Ambulance Disaster (1963-64) from Warhol’s Death and Disaster Series. This body of work depicts real-life horror and trauma, but transforms them into images that resemble film stills – here, they are laid alongside Brant and Hopper, the muses of the collection. Horror is juxtaposed, always, with dreams. It always becomes beautiful. Good always triumphs.