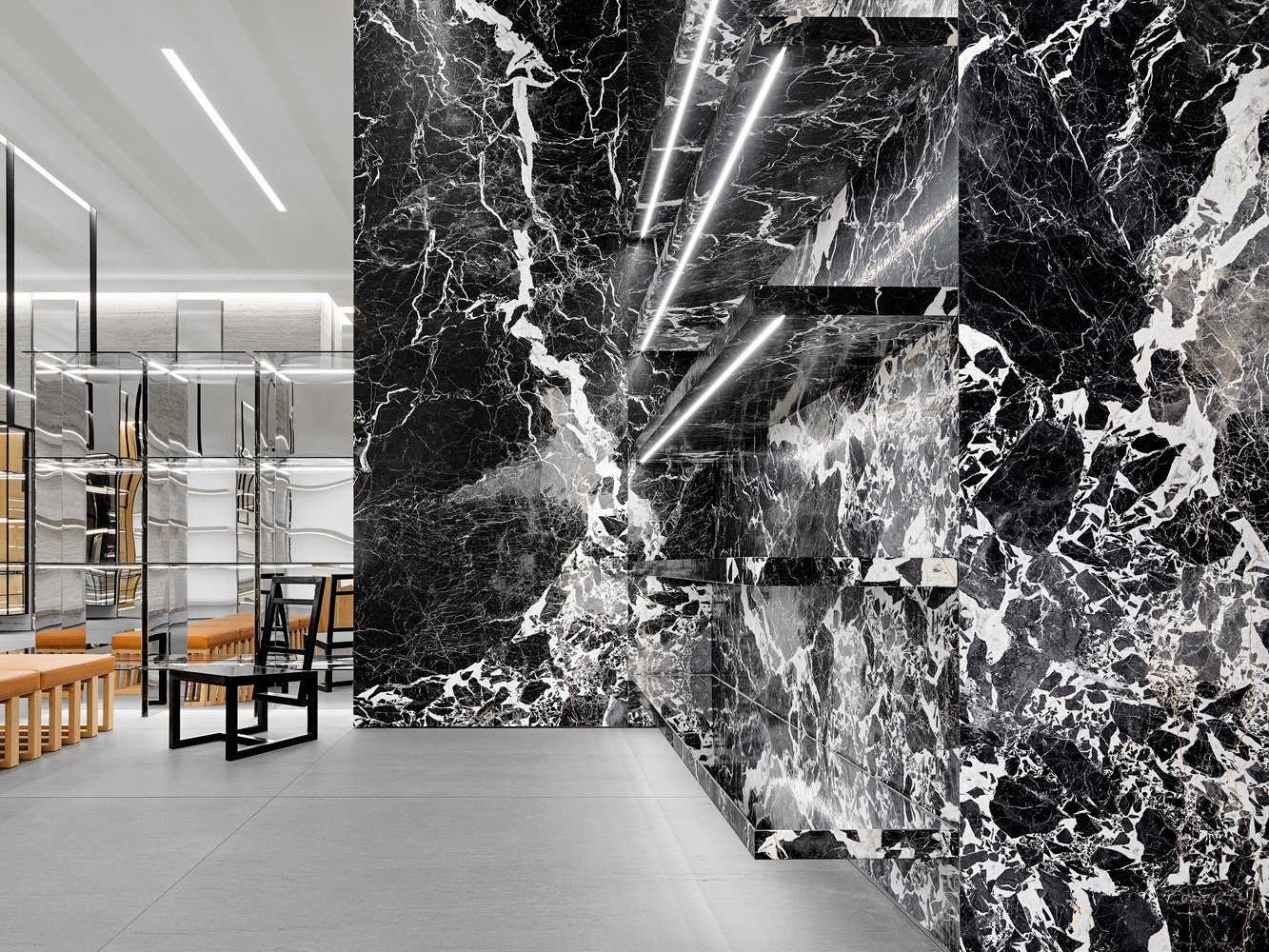 Writer David Colman explores the inner world of Celine by Hedi Slimane as seen through the stores interior design and architecture.

For an alarming number of entities today, staying relevant is seen as virtually the same thing as staying alive. And that goes for people and publications, as well as companies and countries.

Maybe it’s fitting that Hedi Slimane’s vision for the house of Celine manages to reconcile both the public day and private night—the French name Céline comes from the Greek for moon.

“The intriguing and layered design language Slimane came up with to reimagineCeline’s boutiques is no simple binary. The house describes the look as ʻ21st-century brutalism,’ referring to the 1960s architectural movement whose monster buildingschallenged bourgeois design concepts. But it’s much more than that.”

The intriguing and layered design language Slimane came up with to reimagine Celine’s boutiques is no simple binary, though. The house describes the look as “21st-century brutalism,” referring to the 1960s architectural movement whose monster buildings challenged bourgeois design concepts such as simplicity, harmony, and beauty. But while there are brutalist elements, it’s much more than that, making Slimane’s Celine as much a head-scratcher as a tongue-twister.

If anything, the stark, crisp geometries and wide-open rectilinear plans for the stores suggest a bent for classic, international-style modernism. This is most impressively true. in the new, 5,000-square-foot flagship on Madison Avenue in New York’s Manhattan, though the homage is clear at Celine’s new stores in New York’s SoHo, Los Angeles, Paris, Milan, and Tokyo (others are on the way). But what does give the look a touch of the brutal is Slimane’s particular midcentury formulation, which borrows less from feminine retail spaces and more from the starkly lavish, masculine bank lobbies of the age.

This effect is telegraphed most clearly through the generous use of wall-size slabs of black granite, graphically marbled with streaks of cream and beige. They almost make you wonder if there’s a giant, gleaming-steel bank vault nearby. This opulent minimalism is quietly shored up by other, more muted slabs of marble striated with dove gray and white, and with flooring of mottled, dark gray basalt.

Not that Slimane set out to recreate some classic modernist shell. Other materials and other design touches from other times and places layer and leaven the space. There are sheets of brass and gold from the Halston 1970s, blond-oak furniture from the Aspen 1980s, high-tech light fixtures in stainless steel from the geek-chic 1990s.

What anchors the stores the most in the here and now—aside from the Celine menswear, womenswear, and accessories collections that Slimane designs, obviously— is all the art he’s chosen. In seeking pieces fabricated from the same kinds of natural materials and executed with the same sophisticated simplicity as the stores’ design features, Slimane turned to some of today’s best-known artists—Theaster Gates, Jose Davila, Elaine Cameron-Weir, Oscar Tuazon, and more than a dozen more—to begin a collection of absorbing yet understated works that give Celine a gloss of the contemporary as well as the timeless.

It takes a real visionary to put these disparate elements together and have them commingle so well. There’s an interesting overlap here with the clothes Slimane has designed so far, which have wavered a bit between the hot LA sunshine he channeled during his years at Saint Laurent and the cool Paris moonlight for which Celine is known. But if the knockout new Celine boutiques are any indication of what Slimane has in store, you can bet that it will be bitingly relevant—with a generous, fabulous quantum of irrelevance, too.

This article first appeared in the print edition of RAIN magazine in the spring of 2019.