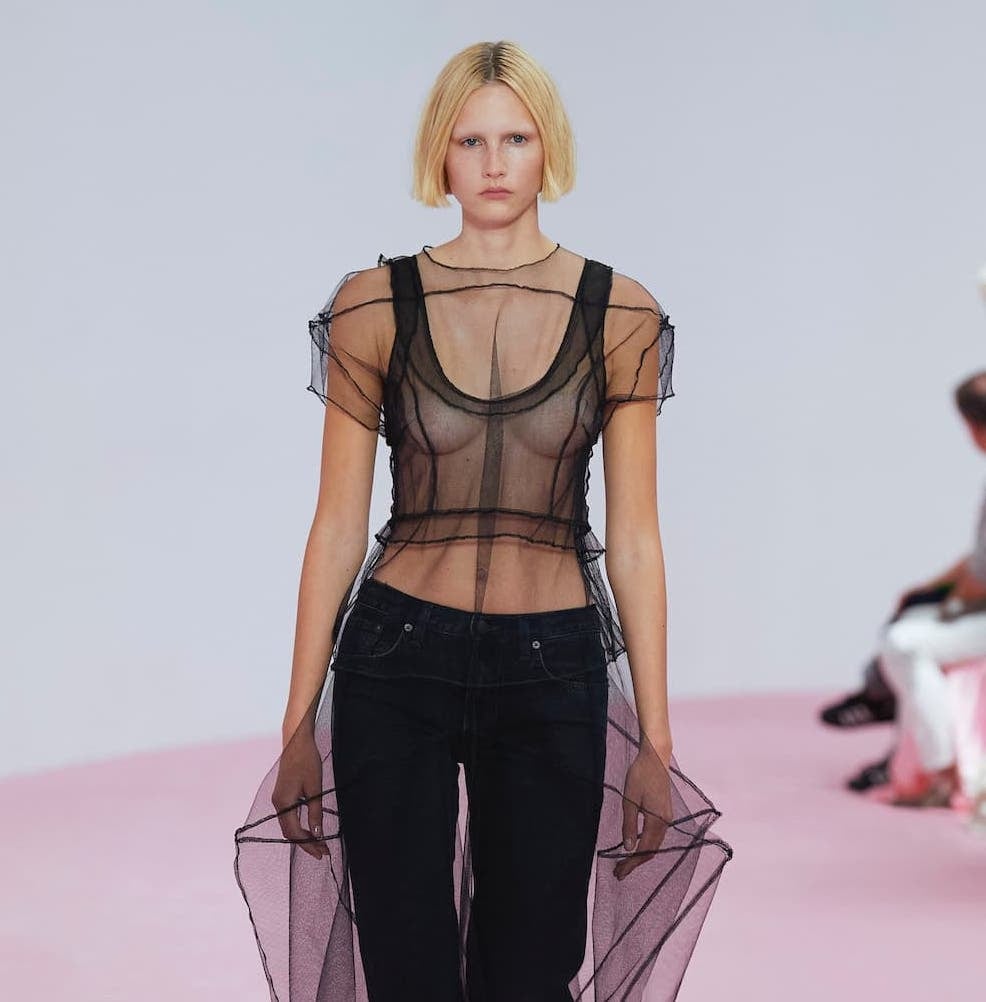 “I wanted to do a show that celebrated the 10-year anniversary of Acne Studios in Paris, and the most iconic event I could come up with was a wedding. I find weddings fascinating because they are always a melting pot, and they kickstart a lot of aesthetic choices. There’s something cute, kitschy, sweet about weddings – but also something serious, tense, and vulnerable. I wanted to put a spin on the classic, kitschy wedding, referencing everything from the tablecloth to the chandelier, the wedding-night bedsheets, the bride’s shoe, the bows, and the cute flowers. And I wanted to counterbalance the archetypes of formalwear with playful touches – opening up a blazer to show what’s underneath, or adding a small flower to a dress because it’s poetic,” says Jonny Johansson, creative director of Acne Studios.

Draping comprises a persistent theme, with silk, tulle, fine crochet knit, creponne, and jersey ruched and wrapped around the body or left to fly. Romantic lace, georgette, and satin-crepe are juxtaposed with harder, more utilitarian fabrics such as hand-painted leather trimmed with studs and garment-dyed cotton organza.

Tablecloth gingham in pink, brown, baby-blue and cherry-red adds a saccharine edge to oversized tailoring, which is offset by raw-edged cut-outs, twisted rose shapes and flocked tulle flowers. Transparent fabrics are enlivened with diminutive florals and heart-shaped appliques. A naïve pastel painting of two cats by the American artist Karen Kilimnik features on the bottom of a leather bucket bag. Preoccupied with distorting romantic traditions and appraising consumer culture, her work featured heavily in the Menswear SS23 collection.

A new minimalist shoulder bag style, the Platt (which translates as ‘flat’ in Swedish), debuts in suede and cracked leather, with a pocket-mirror pouch and spike-and chain-adorned straps. Elsewhere, a delicate metallic box-bag with a bow motif and a roomy and micro-sized bucket bag smothered in metallic spikes accompany catwalk looks.

Acne Studios debuts its ‘AS’ Monogram in jacquard print. Offered in two new shapes: the minimalist Platt and a patchwork denim and vinyl style. Directly following the SS23 show, the Platt Monogram will be offered as a limited early release available online and at select locations globally. It’s the first iteration of Acne Studios Monogram which will launch with a bigger range in spring 2023.

10 years of showing in Paris

Acne Studios showed its first collection in Paris during the Fall/Winter 2013 season at the Palais Galliera, known at the time as the Musée de la Mode de la Ville de Paris. “We ended up in Paris as the result of a collaboration with the Musée de la Mode, and that first show was very ambitious. My goal was to collaborate with an iconic museum of French heritage in a modern way. I asked my friend, the artist Katerina Jebb, toscan the antique pieces from the museum’s archive and then I projected the scans onto the fabric I was using, either printed or embroidered, then cut our modern pattern on top. In my mind, it became a meeting between Scandinavian and French culture,” says Jonny Johansson. To mark 10 years in Paris, Acne Studios presents its Spring/Summer 2023 collection at the Palais de Tokyo, an equally emblematic Paris institution.

The Women’s Spring/Summer 2023 collection will be available in all Acne Studios stores and on acnestudios.com from March 2023. @acnestudios

Cher closes Balmain in Paris as the ultimate trailblazer