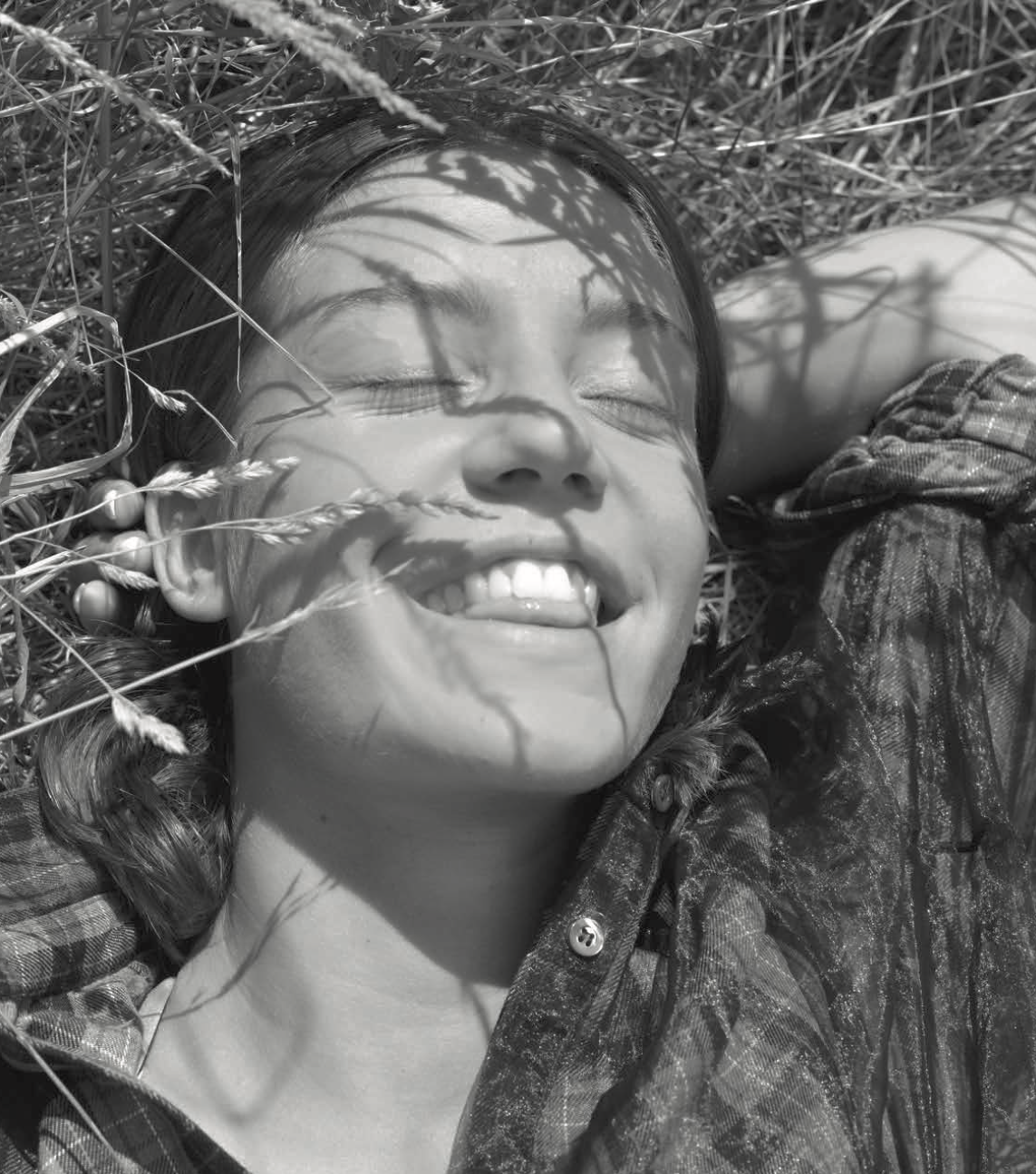 A Palme d’Or at the 2013 Cannes Film Festival when Adele Exarchopoulos was just 19, a scandalous sex scene, a media buzz with little to no precedent nothing about Adele Exarchopoulos’ rise to fame began as it usually does for aspiring actresses. After appearing in Abdellatif Kechiche’s Blue is the Warmest Color, the overnight star was faced with the unforeseen challenge of living up to an already cult status. On the eve of the release of her new film, Ralph Fiennes’s The White Crow, and as she prepares to make her theater debut, in Paris next year, RAIN stepped behind the scenes to discuss her life as a young mother, her relationship with social media, and her desire to only ever live up to her own standards.

Alice Pfeiffer: Can you tell me about your experience working with Ralph Fiennes?

Adele Exarchopoulos: I only met Ralph Fiennes once before we skipped straight to the casting stage, where I discovered his uniquely sharp vision. You immediately feel the impact of his experience as an actor—he is involved in every gesture, every gaze, and keeps adding density and complexity to each character throughout the process.

I’ve rarely met someone with such a precise perception. He is extremely generous to his actors, to the roles, and to the story he wants to tell. Which in turn made me want to give even more of myself! I remember the day he called me to tell me I had got the part. I said to him, “I promise to live up to your expectations,” to honor the person whose role I play, Clara Saint, an incrediby elegant woman, who I was lucky enough to meet in real life.

AP: Are there notable differences between American, British, and French directors?

AE: To me, every director is unique. This is entirely subjective and based on my own work experience, but every person I have worked with has a unique way of directing a team, leading a project, which I really can’t relate back to a nationality or a specific culture. Before anything, a shoot is a human experience.

AP: You are also to appear in your first theater play—how has the experience been so far?

AE: Indeed. I’m very lucky to be making my theater debut under the direction of Simon Stone, alongside seven groundbreaking actresses—I am the only first-timer of the cast.

The novelty of the experience gives it a certain gracefulness, but also an enormous amount of fear and pressure. At the moment, we are still at the writing stage. Simon has a unique way of working—he writes when the whole cast is together, in a theatre. He takes notes as he listens to us talk among ourselves. We are all getting to know each other, and we discuss profound and light things. I don’t know how he manages to write so much surrounded by seven women chitchatting away!

AP: What is the biggest difference and challenge in comparison with acting in a film?

AE: Essentially, the challenge is always the same—it is about taming your fears, giving the best of yourself and doing justice to your part. And most importantly, never ceasing to learn.

Blue is the Warmest Color

AP: I can’t even begin to imagine how many times you’ve been asked about Blue Is the Warmest Color, but I have to ask—can you tell me about the aftermath, from the roles you got offered to the lessons you learnt?

AE: I understand and fully accept that I will always be asked about the film. Blue Is the Warmest Color propelled me into a world I barely knew, in the heart of the industry. I discovered promotional tours, film festivals—all elements that still feel new to this day. At the time, I dealt with them with naivety, which made them both funny and touching. I went through the whole experience surrounded by the people I love. For example, the night I received the Palme d’Or, I went to the after-party for an hour, to celebrate our victory with the team. But then I went straight to meet my best friends for our own feast— we sat on a bench and ate paninis. The simplicity of it is what made the moment exceptional. I couldn’t believe what had just happened.

AE: Yes, suddenly everyone was saying to me, “You know, this film is about to changer your career.” And I always wanted to reply, “What are you talking about, what career? I barely have one.” I had to learn everything so quickly, which was challenging—making mistakes, not taking everything to heart, realizing that in interviews or on television, people remember what you’ve said but also how you’ve said it. So I am responsible [for what I project] whenever I am asked to talk.

AP: What else do you feel you’ve learnt from this role?

AE: I am thankful because, today, I am doing the job I love. It also taught me that you have to be honest with yourself and recognize your own limits—you cannot do or perform everything. After Blue Is the Warmest Color, I started getting proposals for roles that I knew I wasn’t ready for or had the maturity for. I was aware of what a beginner I still was. I learnt to say no, and that it didn’t mean I was scared of a challenge, but that I didn’t want to lie to myself and accept a part for the wrong reasons.

Also, while I have nothing but good memories from this experience today, there was a time, afterwards, where I felt incredible pressure. The fact that I started in such an unusual way, with one of the greatest directors alive, starring in one of the most incredible love stories told, always made me think how can I ever live up to such standards? How can I not disappoint everyone further down the line? And today, I’ve learnt that, yes, maybe I’ll disappoint some, and it will be a lesson for the future. What counts most for me today is my family. Has my son smiled today? Has he learnt something new? This is the most important success I could hope for. And the rest? I’ll do my best.

AP: Talking of your family, you have kept your pregnancy, relationship, and son off social media. Was that a conscious decision?

AE: Indeed. I would never expose my family on social media. I’m not judging people who do, but to me at least, this is incredibly intimate. And to be honest, I don’t see the point of it. I want to protect what is most precious to me, and never suggest that strangers’ gazes on Instagram matter in any way. We are all aware of the level of trolling, violence, and the hypocrisy online. It might sound childish but I really couldn’t stand reading horrible comments about my family.

You know what else has changed? The notion of time and sleep. Welcoming a child into your life changes everything so radically. When he sleeps, I’d rather use the time to rest than post a gazillion photos… kidding. I’m happy to do it, but let’s just say my time is more limited and more focused on my son and it shouldn’t be any other way.

AP: You are young and beautiful—how do you make sure you are taken seriously as an actress?

AE: I know I’m young, and while some personality traits will stay, looks won’t. But I honestly hope people will judge me for my performance and not my appearance. The latter is something I never do with other actresses. Nevertheless, as a woman, it can
be ambiguous, especially in the promotional period for a film— unconsciously, everyone expects you to match their projection, or for you to play along. But you have to remain yourself. It is precisely when you try to match other people’s vision of you that you lose yourself. And it is dishonest both to you and to others.

AP: It must also be odd to read media coverage of yourself by people who don’t know you. Do you feel caricatured at times?

AE: Honestly, yes, it remains very strange to read about yourself. You never recognize yourself fully in the profile a journalist writes of you, which is not surprising when you’ve only spent one hour with that person. And getting to truly know anyone is complicated enough as it is. And yes, I am surprised to see myself described as super-free, loud- mouthed, constantly rebellious, because I am a profoundly shy person. But all of this is irrelevant in the end. The only opinion that matters to me is my dad’s or my brother’s, if, say, they were to tell me, “Adèle, you are beginning to lose yourself.” As for the rest, I can’t start questioning myself everytime I read something, I’d lose my mind.

AE: I’ve always liked fashion, but knew literally nothing about it for the longest time. My family is not that into it and it wasn’t a big part of my life, I just saw the industry as this sublime and distant art form. My mum is a nurse and has always put comfort first, so I followed her lesson and got really into sneakers [LAUGHS.].

More seriously, when I was given access to fashion, and began getting invited to runway shows or offered pieces to wear, what I most enjoyed was discovering the ateliers. Louis Vuitton organize many events where we are given the opportunity to witness different stages of the craft process and get familiar with the historical aspect of the brand, especially its leather goods. I was blown away by the patience and passion of these artisans working behind the scene. And I like Nicolas [Ghesquière] on a human level, but also, to me, he is a unique and truly innovating designer. What he is doing is important for women—he creates daily heroines who are proud and dignified. I like his audacity.

AP: You’ve mentioned that having a family changes things in all aspects. Has this also affected your sense of style?

AE: Having a child has changed my outlook on an enormous amount of things, regarding my relationship with myself, my priorities in life, yes. But not on fashion. On the contrary, I like being a multitude of women every day, and never feel reduced to a single role. I love the idea of being at the park in sneakers one minute, and then, after reading my son his bedtime story, slipping into high heels at some times, flipflops at others. That is the much-cherished freedom fashion provides me… my sense of freedom, anyway.

Theodore Pellerin, ‘I wanted to become somebody else’