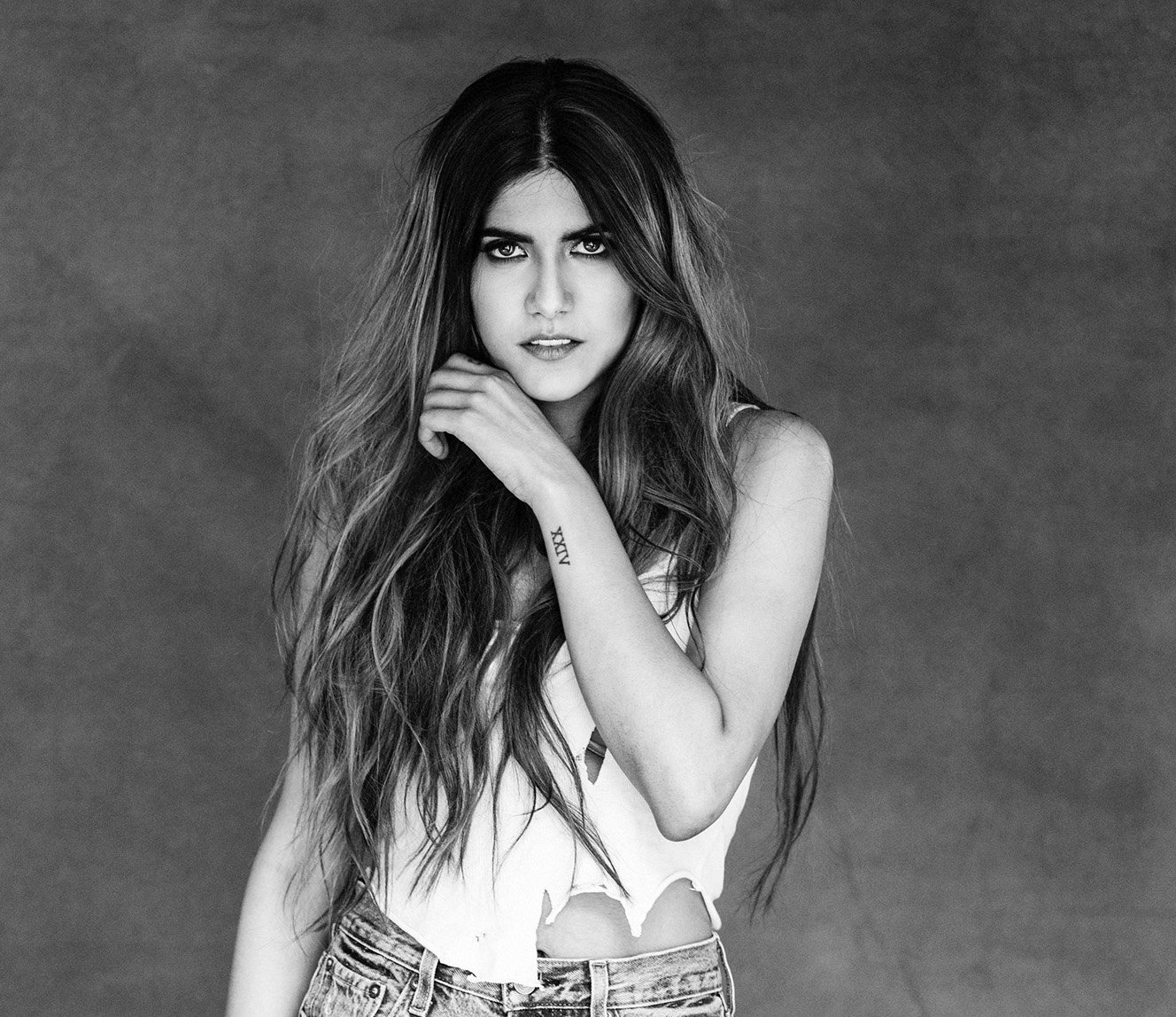 Ananya Birla is quickly becoming a tour de force in pop music. Originally from Mumbai, Ananya has quickly climbed the charts with five of her singles reaching over 300 million streams after going platinum in India. Ananya is the first to do so in India with music in the English language. Her latest single, “Let There Be Love,” released this month and is the perfect comforting ballad during quarantine.

In addition to sharing her love for life through music, Ananya is devoted to helping the greater good with several philanthropic efforts. She founded Svantantra Microfin, a microfinance lender that supports women entrepreneurs in rural India, and MPower, an organization dedicated to eradicating stigma surrounded mental health for the youth in India. Rain caught up with Ananya in L.A. to ask her about her blossoming music career and philanthropy.

Mark Benjamin: Where are you currently? How are you channelling your creativity during quarantine?

Ananya Birla: Right now, I’m in L.A. with my rescue dog, Bean. I’ve always loved this city and came here from Mumbai at the beginning of the year. I was supposed to head back to India a couple months ago to see my family but got stuck.

The alone time has forced me to do a lot of self-reflection. With my latest song “Let There be Love,” I wanted to share that journey. For me, this is one of those times in life when you are forced to strip away everything that doesn’t matter and get back to what does. I want to remind people that beautiful things can blossom out of dark moments and to try to make love and connection a priority.

MB: Your first breakout single was ‘Livin’ The Life’ with Afrojack that has over 19 million views. How did this song come about?

AB: ‘Livin’ the Life’ was written after going through a tough phase of unrequited love, something we all have to go through at some point. I came out of that whole period as a stronger person, living my dream by pursuing music, and I wanted to channel that journey with the track.

Afrojack and I linked up. He was doing more in India and had heard the song and wanted to do a remix. I was just starting out so getting to link up with someone who had achieved so much was pretty mind-blowing. He was awesome to work with and is a massive presence – both personality-wise and literally, too…he’s like 7 ft tall!

“I want to change the way that people think of artists coming out of India and hopefully pave the way for musicians at home to think more internationally when they are creating.”

MB: How was working with Sean Kingston on ‘Day Goes By’?

AB: I met Sean when we were performing at the same show in India back in 2018. I shared some music I was working on and he said he’d be keen to do something together. We exchanged numbers and when I was back in L.A., we linked up in the studio. We came up with the song and did everything ourselves, then the next month we were shooting a music video for it. He has such a great energy and was so much fun to work with. We are still close, he’s one of those people who always has my back over here.

AB: When people bring up Indian musicians over here, they automatically think of Bollywood tracks. Don’t get me wrong, I love Bollywood – I grew up on that stuff, but there is so, so much talent back home in loads of different genres – hiphop, EDM, indie, metal – it’s such an exciting time.

We have such a rich and diverse history of music and collaboration, and it’s definitely had an impact on me. I’m so excited to show that off on a global stage and hopefully make my country proud.  I want to change the way that people think of artists coming out of India and hopefully pave the way for musicians at home to think more internationally when they are creating.

MB: Your songs are uplifting and filled with positivity. It seems to extend into your personal life as well. You’ve founded a microfinance organization that makes loans to women entrepreneurs in rural India, as well as MPower, an organization dedicated to the youth and mental health illness. Can you tell us more about your philanthropy?

AB: Where I grew up in India, the divide between the rich and the poor is enormous, and I was – and still am – acutely aware of my privileged situation. I found myself in the position to try and make a positive impact, so when I was 17, I set up Svatantra, which supports female entrepreneurs in rural areas and helps them to grow their businesses through microloans. I wanted to create a platform which encourages women to fulfil their potential and achieve independence.

With Mpower, I wanted to ensure that people in India were able to get the same support that I was lucky to have when I struggled with anxiety and depression. Mental illness is a topic that’s still taboo around the world but especially in India. There’s a terrible stigma that means people are scared to reach out for help. The rates of suicide and depression are some of the highest in the world and things are only getting worse amidst the pandemic. We campaign to stamp out the stigma around mental illness and provide care for people living with mental health issues who have been ignored or discriminated against. We want people to know that it is OK to not be OK sometimes. And for them to feel confident that there is help available should they need it.

I’ve also recently teamed up with NAMI in the U.S., to support them with their amazing work around mental health here. I did a talk with them recently with Utkarsh Ambudkar, who was in one of my all-time favorite films, Blindspotting. We spoke about what it was like to come from a South Asian background and experience mental illness.

School to the studio

MB: You studied economics and management at Oxford University. While in university you started writing music and your career took off from there. How was this time in your life? Did you feel you could make a bigger impact through music?

AB: I realized early on that life is too short not to pursue the thing that makes you happier than anything else, even if it’s a scary prospect at first. I consider myself incredibly lucky to have found that, and to be able to do it every single day.

At Oxford, I was writing a lot and performing every weekend at sketchy open mic nights around London, but I was so scared to put myself out there fully. I worried about what people might think and about getting judged on the thing I loved most. But eventually that fear was outweighed by the passion. I dropped out shortly after and I don’t regret that decision, it’s so important to follow your instincts, even if that means going against the grain.

Music was my best friend growing up through good times and bad – it made me feel connected, that there was someone out there who was going through the same thing I was. I want my music to be able to do that for people too.  I really believe music is the ultimate global language that can engage people no matter who they are or where they are from.

MB: I can tell fashion is important to you. You have an amazing range! Where do you draw inspiration from?

AB: Thank you! My style, like my music, is all me. Fashion is a form of self-expression – you have to do you. It’s hit and miss sometimes, so I am glad you have only seen the good stuff. I am particularly obsessed with sneakers and have had to give my spare room up to my collection.

MB: I saw you met with Lil Nas X. And you also a number of world leaders. How were those experiences?

AB: I am always fascinated to meet people, whatever they do, who have achieved so much. Success means different things for different people, and I love to explore that and to find out what drives them. It’s why I am totally obsessed with biographies and documentaries.

The thing I always try to find out is where these people have made mistakes. I’ve had my fair share of ups and downs over the last few years and understanding how these people have overcome slip-ups and come back stronger is fascinating. A lot of people assume that those who are super successful had it easy when usually they have failed way more than any of us. You have to learn how to fall if you want to fly.

Let there be love

MB: Your latest single, “Let There Be Love” is out now. What can we expect of things to come from Ananya?

When I came out to the Grammy’s at the beginning of the year (to attend and not to perform…yet!) I met Greg Thompson, the president of Maverick Management.

We were totally on the same page from the start. I knew the moment I met Greg, that he is the mentor I have been looking for. Maverick have also worked with some of the most amazing artists like The Weeknd, Miley Cyrus and G-Eazy, so to have them in my corner feels great.

We have a few more songs coming out, including a couple of collabs that I’m not meant to talk about too much just yet, and then an EP. It’s going to be a big year.