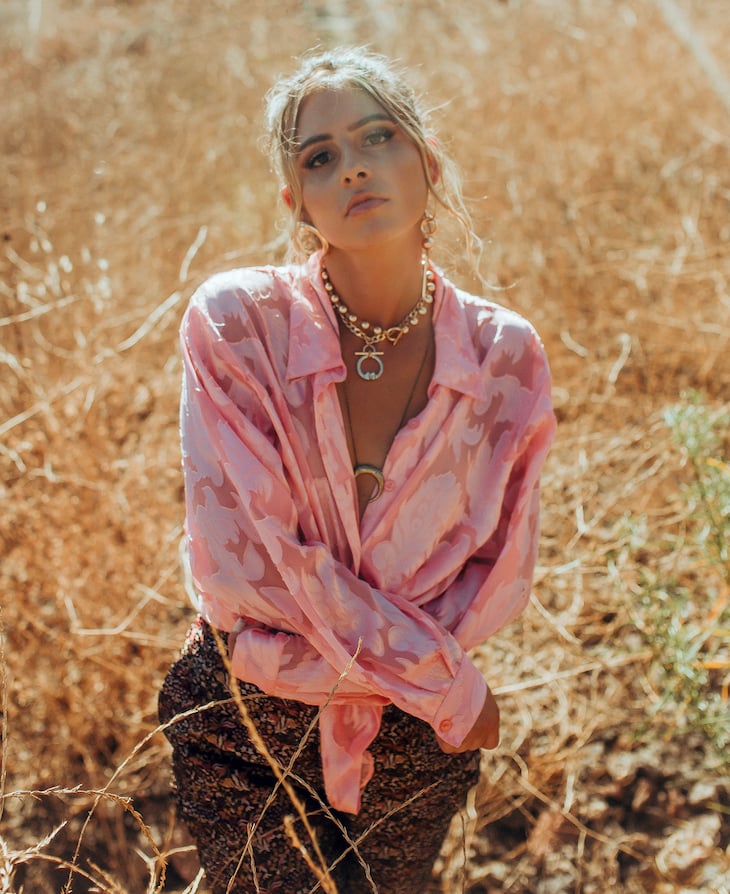 At just thirteen years old, Carly Rose became well known as the runner-up on the second season of The X Factor. She soon found herself in the midst of top producers in the music industry but was unsure about the vision she had for the music she wanted to create.

After returning to school and attending USC where Rose has been honing her craft in the music-industry program, she released a number of impressive singles this year including “Twenty-one,” “Song of the Summer,” and “birds & bees” (listen below). Her new EP, WILD, is out today. We spoke with the singer on her life journey and how she found clarity for writing the songs she always wanted to.

Mark Benjamin: You have had one hell of a time growing up having been a finalist with The X Factor and then pushing to succeed in the music industry. According to your Los Angeles Times profile, you pushed back against the labels and wanted to write your own music and develop your own artistry. Can you talk a bit about your journey?

Carly Rose: I was around 14 years old when I got signed and I got thrown into the world of writing and recording sessions pretty quickly. It was my first time being in that environment and I was with top writers and producers who all had a clear idea of what kind of music I should be making. These writers and producers were all so talented, but I had no idea who I wanted to be or what I wanted to make at this point so I let them tell me what I should be making.

I did, however, learn so much about songwriting and pop structure from some of the best pop writers and producers in the game. When I realized that the music I was making was drastically different than the music I was listening to, I realized I needed to shift gears and incorporate more of my influences and what feels authentic to me into what I am creating. Having this pop sensibility ingrained in me while experimenting with this helped create the blend of pop and indie rock that I love to create.

MB: Your recent songs “Twentyone” and “birds & bees” are such great songs; unusual I would say for pop songs. Tell me about where you found inspiration to write these. Where does inspiration hit you?

CR: Thank you so much! I wrote these songs in two completely different headspaces. I wrote “birds & bees” soon after getting to college. Everything about the experience was so new to me and it was one of the most exciting periods of my life. I wanted to write a song about that feeling. It’s a song about being at a party and meeting someone who you’d rather just leave the party with. It’s an intoxicating feeling. Youth, lust, and naïveté is a hell of a combination.

CR: I wrote “Twentyone” in homage to artists like Lil Peep and Juice WRLD who rose to superstardom. Then didn’t live to see their 21st birthdays. The song explores the lifestyle of excess and immense power that can be intoxicating, yet incredibly destructive, and these words are my feelings of that unsettling contemplation that sets in when the impact of our icons becomes the only thing left to idolize.

MB: You seem to have a penchant for indie music. You’ve been quoted as really taking to Arctic Monkeys and Queens of the Stone Age. Who are some others of your go-to bands or musicians? And how do they inspire your music?

CR: Yes, they are two of my favorite bands. Makes sense since Josh Homme worked on so many Arctic Monkeys records, haha. I also love The Strokes, The Black Keys, Alabama Shakes, King Princess, Kings of Leon, Amy Winehouse, Etta James. I love the soul/alt rock blend that all these artists bring to the table. While still being able to maintain a mainstream presence.

MB: You and Taylor Swift both have songs out right now called “getaway car.” Do you agree nothing good starts in a getaway car?

CR: Absolutely. It is such an intriguing and invigorating concept. Running away with someone, literally or metaphorically. But being with someone that takes you away from any sort of stability or safety can only be exciting for so long before it gets destructive.

MB: The electric guitar takes center stage on “3 Nights,” which is super cool. I’m glad to hear it making a comeback in pop. Why was it important for you to do an indie rock song in this way?

CR: I came up with this version of “3 Nights” with one of my best friends who is actually an artist as well doing some really cool stuff right now. His name is Sally Boy. I came to him and had the vision for this being an electric guitar driven cover.

It feels kind of nostalgic to me this way, like early 2000s rock. I wanted it to have this feel to it to really take it out of the world that the original song lives in because it is so specific and cool as is. The energy it brought to the song was great and it allowed me to really have fun with the vocal performance as well.

I wrote “Twentyone” in homage to artists like Lil Peep and Juice WRLD who rose to superstardom. Then didn’t live to see their 21st birthdays. The song explores the lifestyle of excess and immense power that can be intoxicating, yet incredibly destructive, and these words are my feelings of that unsettling contemplation that sets in when the impact of our icons becomes the only thing left to idolize.

Song of the summer

MB: I really love “Song of the Summer.” It’s so true that these summer songs get tied up in summer flings and romances. You can never hear them again if things go sour! Tell me about your perspective for this track.

CR: Thank you! That is really one of the most intense things for me. Everyone knows that songs are like smells and they can bring you back to an exact moment in time instantly. It is one of the most powerful things for me so I wanted to try to capture that in this song.

It can really go either way. There are songs that bring me back to a time and just immediately fill me with joy if the memories are still pure. Then, it can be the opposite experience if the song brings back a time that feels tainted. I will say, these ones can be exceptional tools to go to when you’re in need of a good cry.

This song is really poking fun at the whole cliche idea of a summer love that felt so good in the moment, until revisiting it after time has passed and seeing it for what it really was. It is okay to get lost in a moment and it can bring extreme joy temporarily, but it can also mask the fact that things may not be as perfect as they seem. So it’s like, don’t play that song that is going to remind me of you and trick me into thinking we were right for each other when it has become clear that that is not the case and never was.

MB: An interesting thing about you is you have had a bi-coastal experience growing up. I think it’s fair to say New York is a completely different experience than Los Angeles. Can you tell me about how that has been for you and how it informs your music, life, experiences?

CR: They are such different places and I really do feel like I have learned a lot of different stuff in the two different phases of my life. I lived in New York until I graduated high school and went off to college. So, for the first 3 years or so of my recording career, I was primarily working with the scene of pop producers and writers in New York City, which is a way smaller community than in L.A.

It really was a beautiful time though. I was at such a poignant place in my life. High school, childhood best friends, high school drama, the high school boyfriend, starting to party, and just growing up in lots of ways. I don’t think I have ever felt anything as hard as I did during that period of my life, which made it a really interesting time to be writing and recording music. So, New York was where I had most of the life experiences that shaped where my music ended up going.

Then, upon moving to L.A., the pool of people to work with, to best get these songs from concept to reality, was so much larger. Plus, I started college at USC, which also had a large impact on my development and writing inspirations.

MB: 2020 has been a very busy year for you. All this new exciting music in the middle of a sombre summer. How do you stay pumped and what’s next for you?

CR: The fact that I knew my debut EP was going to be dropping this summer really was the light at the end of the tunnel. I have been waiting to release a body of work like this for so long and knowing I would be able to share this with people soon kept me excited.

My next goal is to continue dropping new music and finishing up some songs that didn’t make it on this project, as well as starting the process of writing for the next one. Besides that, starting to perform (virtually for now and hopefully in person soon). Now that the EP is out, it is the perfect time for me to dive into this aspect of my career that I have yet to really explore. I can’t wait!

Gus Dapperton tells us all about his highly anticipated album, ‘Orca’