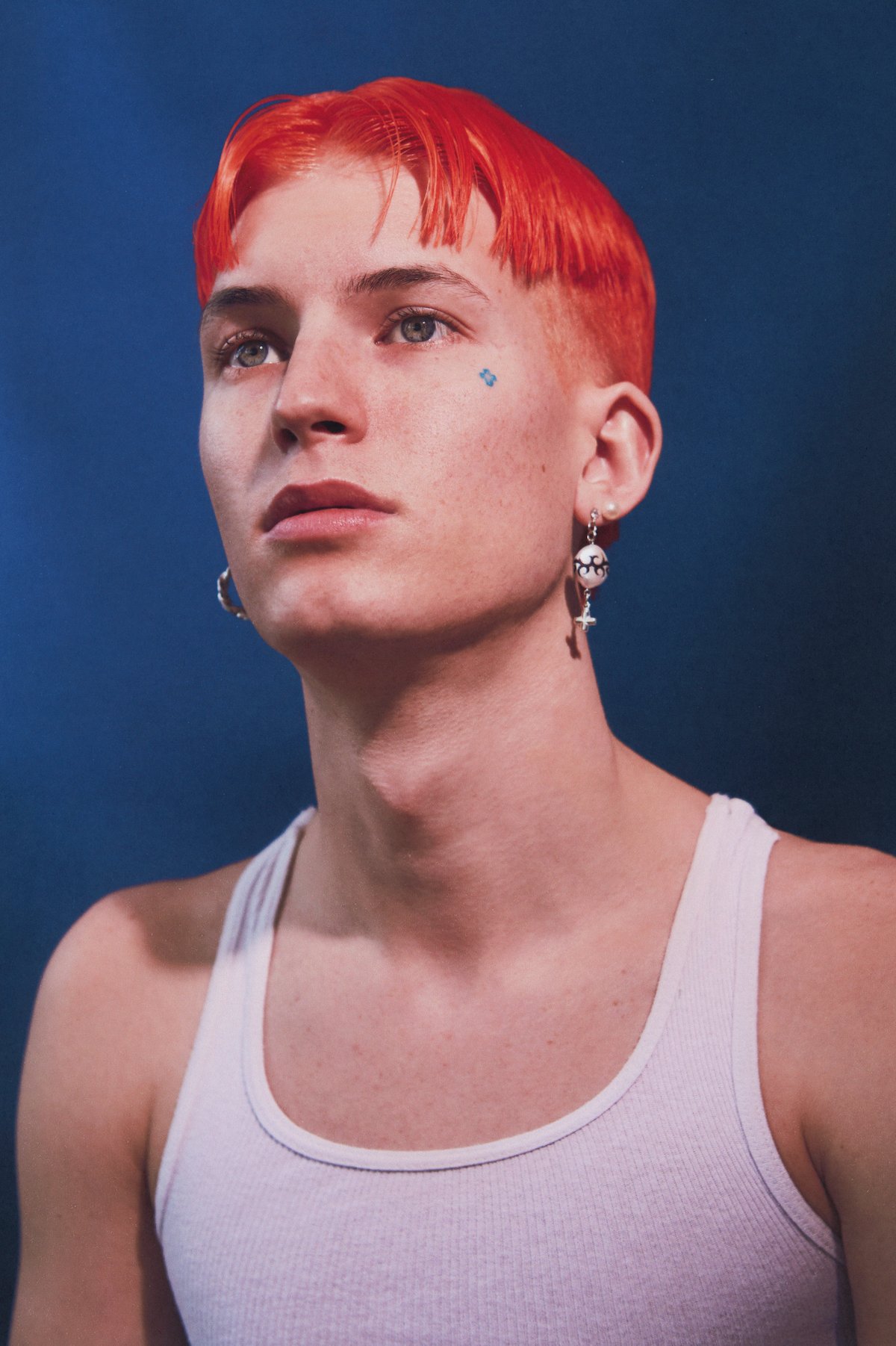 Gus Dapperton has become a leading figure in the indie music scene over the past four years. With a unique voice and idiosyncratic vision for his music, he has quickly become an influential force in music. It’s no wonder why – Dapperton is extremely committed to his craft. He creates, records, and produces all of his own music in addition to directing many of his own music videos.

You may recognize his vocals on the recent chart-topping hit, “Supalonely” by Benee which Dapperton featured on. We caught up with him on his highly anticipated forthcoming album ‘Orca,’ which releases on September 18th.

Mark Benjamin: Hi Gus. You’re considered indie royalty in the music scene here in New York, and Brooklyn, especially. Did you ever think you’d end up on pop song like “Supalonely”? Was that unexpected for you?

Gus Dapperton: It didn’t really surprise or phase me; it was definitely unexpected though. I’ve always set in my mind, a sort of bar for myself: I want my music to reach the most people. I want to make music that’s true to the world and I’m doing it ’til the day I die.

MB: We spoke with Benee for RAIN when her first EP came out. She’s from New Zealand, so I was wondering how did your collaboration come about?

GD: A couple of mutual friends put us in touch. She was working on “Supalonely” and said, ‘hey, I’m a fan and want to get you on this song. Let me know what you think.’ I’m usually pretty hesitant to do features and if I’m not directly involved with the music making process…well, I’d just like to be involved.

They sent the song to me and I thought, ‘This is great. I can actually hear my voice on this.’ We were chatting over FaceTime and I laid down the vocals and they said, ‘These are perfect.’ Then we finished it up and Benee put it out on her EP. Usually it doesn’t go that smoothly [on collaborations]. Usually we’re bouncing a million ideas back and forth. It was pretty serendipitous and easy.

“I love making upbeat, happy songs about those sorts of things, but I had been neglecting these other emotions that really needed a release. I think I finally built up the courage to do that.”

MB: You produce, record, and create everything for your music, all by yourself, with a lot of analog instruments and it kind of reminds me of Prince because that’s what he did. That’s pretty rare today. Can you talk about that and your process?

I also wanted to have it all recorded immediately. Kind of out of necessity. I started doing everything myself and then also the mixing and mastering. I didn’t necessarily have the funds to hire someone to mix and master it. I did it myself out of necessity; I liked to create that way. I like to make stuff fast and get it down pretty quickly.

MB: Oh, wow. So, you mix and master it yourself?

MB: You have a huge repertoire of music for how old are you? Twenty-four?

MB: I think that’s awesome for new fans and listeners to really get into all of your previous albums. You’ve got this new album Orca coming out. Tell me more about the great cover art. I really love the photo.

GD: Most of those songs are me reflecting on the result of feeling unbalanced on and in the midst of touring, and just living an unhealthy lifestyle in regards to lack of sleep, unhealthy diet, unhealthy drinking habits, and overall exhaustion. Having huge emotional highs of playing a great show every night and this lifestyle catching up with this person who is going around treating life like a joke. Not really caring what the consequences for further actions are and it’s about the people around them that reel them back in.

MB: How does this album evolve from your past work?

GD: It’s evolved in terms of what I’m reflecting on. I would always make songs about love and heartbreak and true love and crushes and things like that.

Making upbeat, happy songs about those sorts of things is great, but I had been neglecting these other emotions that really needed a release. Finally, I built up the courage to do that. I’ve gotten better at really dialing in a specific narrative in my music and it’s not so scattered. I feel like this album I’m really proud of and how I put it together.

GD: I don’t think about it very much. I look in the mirror and I’m like, ‘Hmm, I think my hair would look good this way and I just do it.’ I think it’s really rewarding and powerful to be able to dress however you want to dress, however you would like to appear. And I think growing up, naturally people discourage you from doing that, like in school, your teachers, and adults, and whatnot.

Now, I’ve gained this courage to understand that I’m my own human with my own rights and feelings and opinions. And I think that subconsciously ties over into how I want to look and I want to appear. I like wearing things like colorful baggy clothes, but I guess there’s just my personal style.

MB: What about your visuals? They’re really strong and such a big part of your music. Even the singles and EPs, everything is very thought out. I wonder if you spend a lot of time thinking about that and if you invest a lot of energy visually representing your music?

GD: Yeah, I think there’s a time and place for visuals. My thought behind it was when I first making music, I was putting 110% into the music. And I noticed that some artists would have really amazing songs and then kind of not so amazing visuals.

And it just takes away from the power of the song. When I started to present my music with art and videos, I thought, ‘well, there’s no point of doing it if I’m not also going to put 110% into the visuals too.’ It adds character and personality to the music that’s only going to enhance it.

I think there’s no point of art and visuals, if you’re not striving to enhance the song.. I care a lot about all of those elements. I’m a director as much as a musician now. Making videos I love almost as much as I love making music. I love making music more, but I still love all the aspects.

MB: How has it been for you to take a break from live shows with the pandemic? Where are you channeling all of that creative energy now?

GD: I’m putting it into visuals and more content. More DIY kind of things and more immersive experiences. I’m trying to get lots more people involved. I did this music video with a bunch of my friends, this lyric video, and I had them send me iPhone clips. I’m trying to figure out how to do more things like that.

I also work on songwriting and producing for other people. Sometimes it’s a balance. I would love to be playing my new songs live, though.

MB: I hope live concerts come back soon. I just saw this big fundraiser called Save Our Stages.

MB: I think that’s a great thing because when I moved to New York in 2012, I saw places like Glasslands go under. I saw a bunch of venues that supported a lot of early up and coming artists all go under. And so I’m thinking if we only have Terminal Five and Madison Square Garden, that is going to be sad.

GD: Yeah, really sad. I feel like there’s going to be a weird prohibition of music of live shows and so there will be new venues and new ways. Like you go through the back door, and there’s a band playing. You know, don’t tell anyone.

MB: That’s funny. After this album comes out, where do you set your sights on your next accomplishment or your next progression for your artistry?

GD: I’m going to keep trying to be the best artist I can be. I don’t think there’s any point in music if you don’t think that there’s a possibility that you can be one of the most influential artists to ever live. Not that there’s no point, but I think everyone should have that faith in themselves. I think everyone should have that faith that what they’re doing could be of the most importance in whatever you do. So, I’m just going to keep working and keep trying to improve and get better.