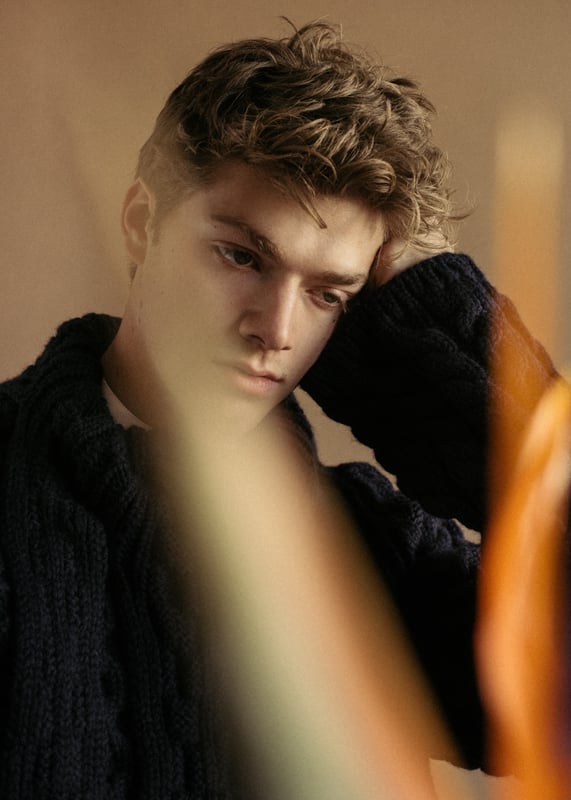 Sweater and shirt by Lanvin, photography by Augusta Sagnelli

When I spoke with viral film creator Lastmanstanley he described himself as, “just a regular guy from Chicago, Illinois.” After watching just a few videos of his, it’s hard to believe that could be the case. The short filmmaker has repurposed the tools and power of the popular social media app TikTok to project his vision to a wider audience with astonishing success. While a following of 265,000 at the time of this writing is a far cry from the largest followings on the app, it is arguable Lastmanstanley is one of the most influential.

In fact, he’s seen several claims to instant fame. Perhaps the most remarkable was a trend he set over the summer where he mimics classical renaissance paintings in a surrealist fashion to a soundtrack he modified from Yargos Lanthimos’ “The Killing of a Sacred Deer” – the psychological thriller partly based on an ancient play by Euripides. The trend went viral and hundreds of thousands of people have recreated Lastmanstanley’s video becoming one of the most bizarre memes, literally, overnight.

Its success even shocked its creator. “I did not expect it at all to become a trend. That was what blew me away. That people were reenacting it…doing the same exact thing. It was actually pretty funny because it was such a bizarre, weird video. It was really random and so many people remade it.”

While TikTok is certainly a powerful film editing software in its own right, much of the creation and painstaking editing happens behind the scenes. Audio must be slowed, modified, transposed, and pitch-adjusted in separate software. Images and clips all have to fit perfectly within a time frame, the maximum of which is sixty seconds. Music, image, plot, and action all have to align perfectly for content to have any potential to go viral. The process can take hours for some, days or weeks for others.

When I asked why he decided to do something so different from other content and creators on the app, he explained, “I wanted to create something abstract and surreal that nobody had ever really seen before.”

While many creators on the app tend to build an audience through relatability, Lastmanstanley goes the other way. He prefers to go by his pseudonym, creating a mysterious aura in an environment where overexposure is the name of the game. “I try to keep a bit of a disconnect from the audience because it creates a discussion around what I’m making,” he explains.

It all started after posting a video of his neighbor’s cute dog and looking at all the positive feedback and demands for a part two. He decided to do one but with a dark twist. “People either loved it, were confused, or were scared. So I decided to go more in that experimental and surreal direction.”

The experimental videos he has created since have gotten quite a bit of attention. With an unmistakable David Lynch eeriness, the films touch on those moments of imagination where you wonder, ‘wait, what if that actually happened?’ A chill goes through your spine.

A video shows him (as Jared) playing catch with his best friend. He tosses the ball and his friend runs after it, forever, as the video camera drops to the ground…his friend never returning. All set to an increasingly loud and frightening soundtrack, the effect is one of shock and fascination that moves you.

“Just seeing so many people commenting on the videos, ‘what the fuck is going on?’ I love that,” he says about the reactions he gets. No stranger to film history, he cites the four time Oscar nominated director Yargos Lanthimos and David Lynch as big inspirations. He also named the Korean dark comedy “Parasite” as his favorite film so far this year.

When I pressed him on whether he feels pressure to continue to make impactful or viral videos, he explained getting back to school has allowed him a certain sense of freedom for creating. “When the videos took off over the summer, I was in a bubble and focused on them a lot. My friends from college had all gone back home. So when I got back to school I gained my perspective again. I realized this is all I do. I sit around and eat donuts. That helped me not to stress out about something that is more of a hobby than anything else.”

Currently attending college for film in New Orleans, it’s no doubt the emerging artist/filmmaker is just getting started. There are sure to be a lot more thrills, chills, and plots twists to share with an ever-growing audience.

Photography by Augusta Sagnelli. Interview and styling by Mark Benjamin.