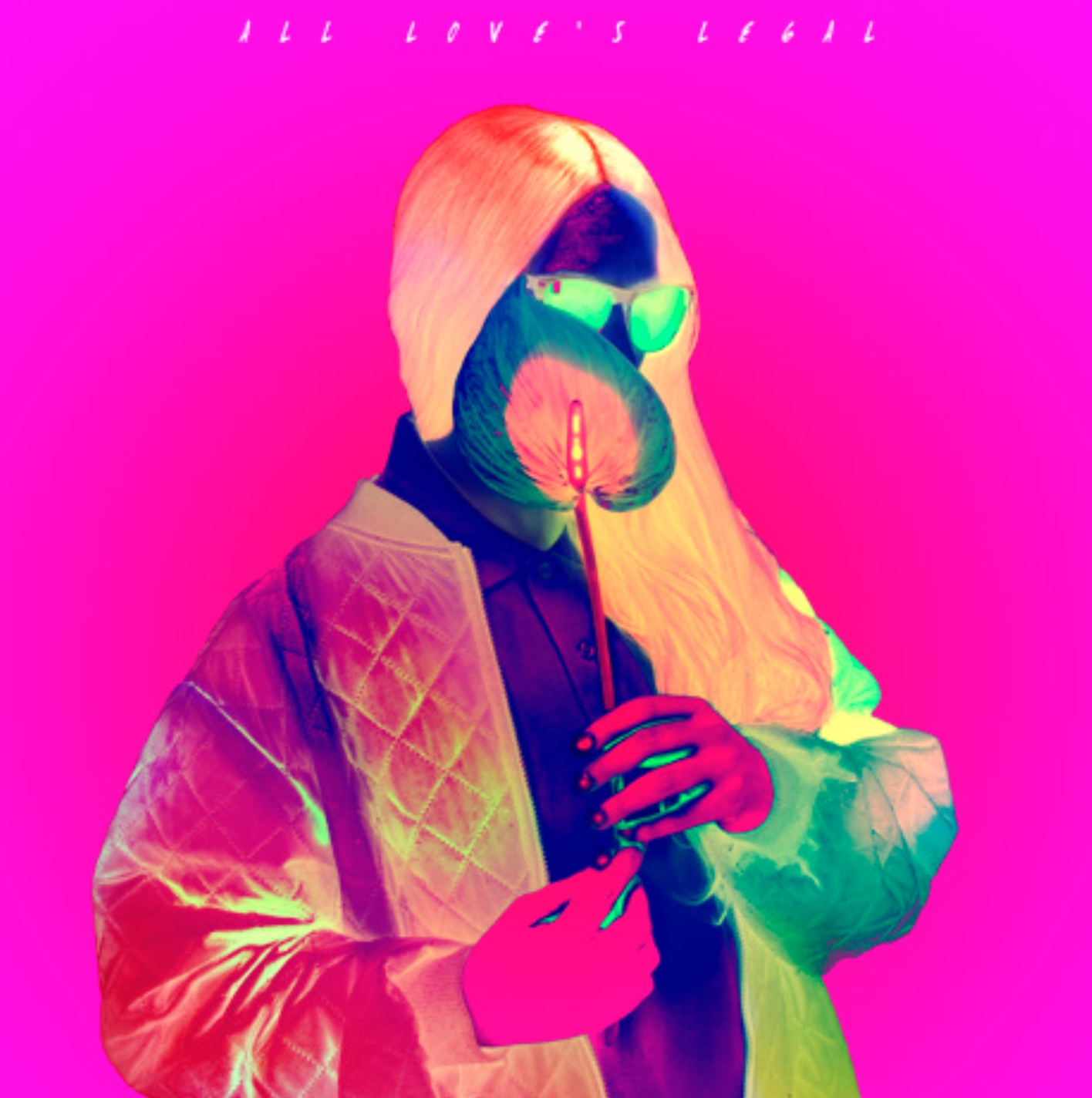 Jam, also known as her band name, Planningtorock, has been living it out in Berlin since the late ‘90s. In that time, she has released three jam-packed albums: “Have It All,” “W,” and “All Love’s Legal,” more than four EPs, and has also collaborated with The Knife and Mount Sims to write the opera, “Tomorrow in a Day.” We catch-up with Jam and ask her about music, fashion, gender, and where all those things collide.

Mark Benjamin: Hi Jam. Thanks so much for speaking with us. I’m a huge fan of yours. I don’t listen to too much pop, so for me this is like interviewing Madonna.

MB: Where in the world are you right now? What time is it? What are you doing?

MB: How long have you been in music? What were your beginnings? Who were your early influences?

JAM: Planningtorock is in its 10th year and my debut album, “Have It All” came out back in 2006. My beginnings are bit complex. I left school when I was fourteen, so no official education, but I was involved in music really early on via my mum’s records and clubbing in Manchester and Wigan.

I slowly hustled my way into art school through my big sis and there discovered video, which blew my mind. Whilst at art school, I got super into filming and making music for the clips. After graduation and a short stop in London, I moved to Berlin where re- cording music and videos got serious. Those early days of 2000 in Berlin is where I started test performing the songs live with video projections and launched Planningtorock as my official artist name.

MB: I read somewhere you were close with The Knife. How has their music influenced you?

JAM: Hell yeah! Olof’s my best buddy, we go back years. I met both Olof and Karin back in 2004 in Stockholm; I was performing a gig with Kevin Blechdom and they came to watch the show and loved it.

“[Let’s Talk About Gender Baby] is to provoke, to kind of deactivate gender and see it for the construct it is. It’s another song I wrote for myself to help me strip back all the gender conditioning and get to know how I feel about gender, what I want from it, and what it means for me, and for others.”

MB: I was chatting with DJ Honey Dijon about politics in music today. Your music is unique in that you’ve transformed politics into music. With songs like “Misogyny Drop Dead,” “Patriarchy Over & Out,” and “All Love’s Legal,” the message is clear. Why is it so important to include politics in music?

JAM: Oh nice, I love DJ Honey Dijon! I don’t think music has to always be political. It’s cool for music to be many things; we need different moods to choose from! Right now, I’m really into using music to explore and express political stuff because it’s what I’m thinking about. I want to share thoughts and push ideas out there that might be useful not only for me but for others.

MB: I listen to “Let’s Talk About Gender Baby” and all the remixes a lot, too. It’s interesting because on that track you invite the listener to talk about gender with you while you sing in a gender-altered voice. It’s a beautiful minimalist moment where you challenge the listener’s perspective. Why is gender just a lie?

JAM: Ah, that lyric is to provoke, to kind of deactivate gender and see it for the construct it is. It’s another song I wrote for myself to help me strip back all the gender conditioning and get to know how I feel about gender, what I want from it, and what it means for me, and for others.

I’m into maximizing gender it’s such a flexible playful thing.

MB: When and why did you decide to change your legal name to Jam?

JAM: I changed my name to Jam because I wanted a name that had no obvious gender, Jam feels like it has its own gender identity, I legally changed it last year.

MB: For three or so years the only albums I seriously listened to were by: you; SSION; Roísín Murphy; and Trust. Trust did a remix of “All Love’s Legal” a while back. I loved that. I feel you both live in similar musical worlds, aesthetically. How would you describe the feel or mood of your music?

JAM: Sweet! Every album has its own distinct character, which is determined by the autobiographical nature of them, so they are all born out of where I was emotionally at the time of making them. “Have It All” is a record about emancipation and discovering feminism. “W” was very much about my own gender identity and constructing my own masculinity. “All Love’s Legal” was all about polit- ical issues that touched and affect my life and that of my friends, as well as opening up about my sexuality.

MB: One of the things I love most about your music is that you create a world within each album, not singles. You can listen to each album all the way through and really get lost in them. There are so few artists that make music like that out there. How do you keep focused in a world where the public demands instant content?

JAM: That’s so nice to hear. Actually, I’m quite inspired by the demand for instant content, because music is such a powerful language and it can touch and communicate with people instantly. I think it is needed especially with topics and issues that affect us all so much.

MB: People claim there is nothing new today, that everything is a remix of past influences. Is it important to know the history of music to create new music today?

JAM: Hugely important! Sometimes, I’ll find an old tune and be amazed by how political a lyric is, or how groovy a beat is or say how rich an arrangement is. I guess, I don’t really think in terms of old or new – more that music can be fresh – whether it was made in the 70s or just last week. Through our time there has always been amazing achievements made with music.

MB: Do you make music for yourself or for others? Do you ever listen to your own music? artists working there? How important is the city [of Berlin] to you as a cultural institution?

JAM: I listen to my music a lot…totally love it, haha. I don’t understand why I would make something I don’t like? So yeah, I make music for me and for my friends.

MB: I read you moved to Berlin many years ago. There are so many great artists working there. How important is the city to you as a cultural institution?

JAM: Berlin has afforded me so many great things, the time to make music, the opportunity to meet sweet groovy people with good hearts, parties and venues that gave me the chance to try out performing, and the space to learn how to put on a show. It also gave me a distance on where I’m from and a chance to understand the class system I grew up in and what it means to be working class.

MB: Many fashion designers are coming out with gender-neutral collectionstions or scrapping gender boundaries entirely, even fast-fashion retailer Zara presented one with much fanfare. Is fashion or style still important to music and identity today?

MB: One of my favorite recent pop albums is Lady Gaga’s “ARTPOP,” even though it wasn’t the critics’, nor the public’s favorite. I thought some of the songs were progressive though, like “G.U.Y.” where she flips the words “girl under you” into an acronym, G.U.Y. It was kind of an amazing and empowering hook. Do you think Gaga has pushed the boundaries of what the public finds acceptable?

JAM: Hmm, I do like Gaga, but to be honest right now I’m super inspired by Beyoncé and how she uses her powerful platform to draw attention to political issues, like for example, bringing the mothers of Michael Brown, Trayvon Martin, Oscar Grant, and Eric Garner to the VMAs.

MB: If you could DJ a celebrity wedding or someone whom you admire, who would that be and why?

JAM: Has to be Wanda Sykes, I’m a massive fan!

MB: What are you working on right now? Any new music on the way?

JAM: Yeah! I’m currently working on a new Planningtorock album, which I started recording in L.A. back in the spring. I’m also recording a soundtrack for a new dance piece together with choreographer, Ian Kaler, entitled: “o.T. (incipient futures)” and another soundtrack commissioned for a 10 minute animation by the amazing Marjane Satrapi.

MB: Do you have any advice for young people?

JAM: You’re important. You matter. Find and build your community, and always be yourself and live life with as much integrity as you can!

Silly Boy Blue on her single, ‘Hi, It’s Me Again’