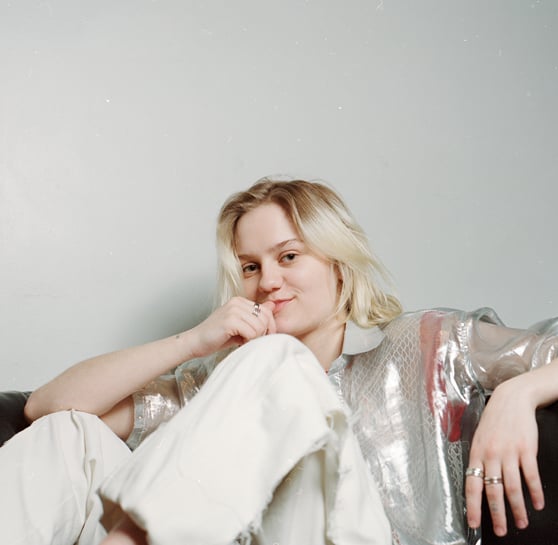 At just eighteen years old, Carlie Hanson signed her first record deal with Warner Brothers this past February. A few years prior, she was working at McDonald’s in Wisconsin. She has had a truly remarkable journey ever since. In the past two years she has released a number of hit singles including, “Only One,” “Us,” “Numb,” and “Toxins” (playlist below).

After opening for Troye Sivan, receiving praise from Taylor Swift along the way, Hanson went on tour earlier this year with British pop punk rock musician, YungBlud. Hanson’s musical output is just beginning and we already love what we’re hearing. Connecting with a generation that was raised on the internet, Hanson’s lyrics come to grips with the good and the bad of romance, relationships, and anxiety in the digital age. We photograph and interview Carlie while on tour with YungBlud in London, exclusively for RAIN online.

Mark: I read you were discovered after posting a fourteen second video in the parking lot of a mall. Is that right? What were you thinking when you posted that?

Carlie: The reason I posted that video in the first place was for a contest… If you won “best cover of Zayn Malik’s song Pillowtalk,” you could win tickets to see him. When I posted that video, I was thinking none other than “I better fucking win this contest” hahaha! But it’s crazy that my whole career pretty much came out of posting that…

How old were you when you decided you wanted to go into music? Did you have music in your life growing up?

My mom and sisters say they vividly remember me singing “I’m A Survivor” by Destiny’s Child when I was only three years old! I can’t remember a time in my life where I wasn’t obsessed with singing.

You just signed a deal with Warner Bros. music in February. I love your quote: “I’m so pumped to know that [Warner Bros. CEO] Aaron Bay-Schuck, Tom Corson and the entire badass Warner team have my back as we take over the world together. Watch out!”

Bay-Schuck went on to say: “She is fearless, wildly creative, marches to the beat of her own drum, has an incredibly strong sense of self, and is a total star. Her growth on both the recording and live side in just over a year since she hit the scene is nothing short of spectacular and it is not hyperbole to say she has already become a real voice for this next generation of emerging young artists.”

Those are big accolades from the industry. Was that a surreal moment for you?

When Aaron gave that quote about me, it did feel very, very surreal. I remember being 11 years old watching Justin Bieber’s Never Say Never movie and being so inspired to get a record deal, make music. Now it’s really unreal to me that my dreams ARE coming true… I’m nothing but grateful! It’s so so so unreal.

What do you want to accomplish with your music?

There are many things I want to accomplish with my music. Most importantly, I want to connect with people. The reason I fell in love with music is because of how much it helped me. Listening to a song and hearing that somebody feels the same way as I do. It just makes you feel less alone, which is exactly what I want to achieve when others listen to my music.

I want fans to come to my shows knowing they can be themselves and feel safe. I also want to show people in general not to underestimate us teenagers and our capabilities, specifically in my generation. Khalid, YungBlud, Billie Eilish, Lil Skies, Shawn Mendes… These are all artists under 21 years old. The youth is taking over the world man, and I think we have a lot we want to say.

This is a common question. Who do you most look up to in the music industry, past and present?

I would say my biggest inspirations are Justin Bieber and Kurt Cobain. It’s funny because they are both complete polar opposites, but what they both have in common when it comes to their art is their authenticity. I strive to be as honest and raw as both of them.

I heard you love horror movies. Is there one that scares you every time you watch it?

Wrong Turn is one scary movie that will still to this day make me pee my pants a little bit.

What inspired “Numb” and the music video?

On the day I created “Numb,” I went into the studio literally feeling…..numb, [laughs]. I just remember not feeling myself and having this dark outlook on life at the time. Like this dark cloud was hovering over me or something. I needed to write about it, I needed to get it out.

Creating “Numb” that day was like a therapy session for me. The music video, that shit was so much fun. As you know, I am a lover of horror movies, and I thought “Numb” would be the perfect song for incorporating some horror movie vibes in the video.

Can I have a ‘Numb’ beanie?

Kurt Cobain said, “I was tired of pretending that I was someone else just to get along with people just for the sake of having friendships.” Do you think this is a sentiment a lot of people feel today with conforming to expectations in social media?

You must of really did some stalking to find that I posted that quote haha! But yes totally, 1,000,000%. There is not a doubt in my mind that half of us on social media are just conforming. Either because we don’t want to be judged or because we are just trying to fit in.

It’s kind of like high school [laughs]. It’s not even just on social media, I see this happen all the time in my daily life. I’ve never been the type that wants to fit in or has cared if someone would judge me because of a picture I post, who I hang out with, etc. It’s not that serious to me! Life is short so you gotta do what YOU want. Otherwise, you’ll just be unhappy.

You were on tour with YungBlud in March, how was that? Having grown up with emo/post-punk influences, it’s very cool to hear resistance, social commentary, and angst again in both of your music. This time it seems inspired by mental health and the influence of the internet in social life, do you find that true?

Touring with YungBlud was one of the most enlightening and inspiring experiences of my life. A tour I will never forget. I learned so much from him performance wise especially. He really makes you feel loved and knows how to put on one god damn good show. We both share the same feelings that we need to talk about certain issues that some artists just don’t either know how to talk about, or don’t have the balls to.

It’s true though! A lot of the songs I hear, especially in pop music nowadays, a lot sound the same. Same feeling, same outlook. I want to mess with people’s heads. I want to write songs that really make people feel something.

How’s the energy out there?

I have never experienced anything like the energy on the YB tour. Absolutely nothing like it! I didn’t want to leave, honestly. That was also the first time I ever got in a mosh pit, during one of YB’s songs, haha, so much fun!!

You’re on tour with Bad Suns in the USA in April?

I am opening up for Bad Suns on their Mystic Truth tour which is very insane. I have been a fan of them for a while, and now I get to open for them?! Life is just not real!!!

Meet Pip Millett, the musician that will move you

Harry Styles shines in Gucci in ‘Lights Up’