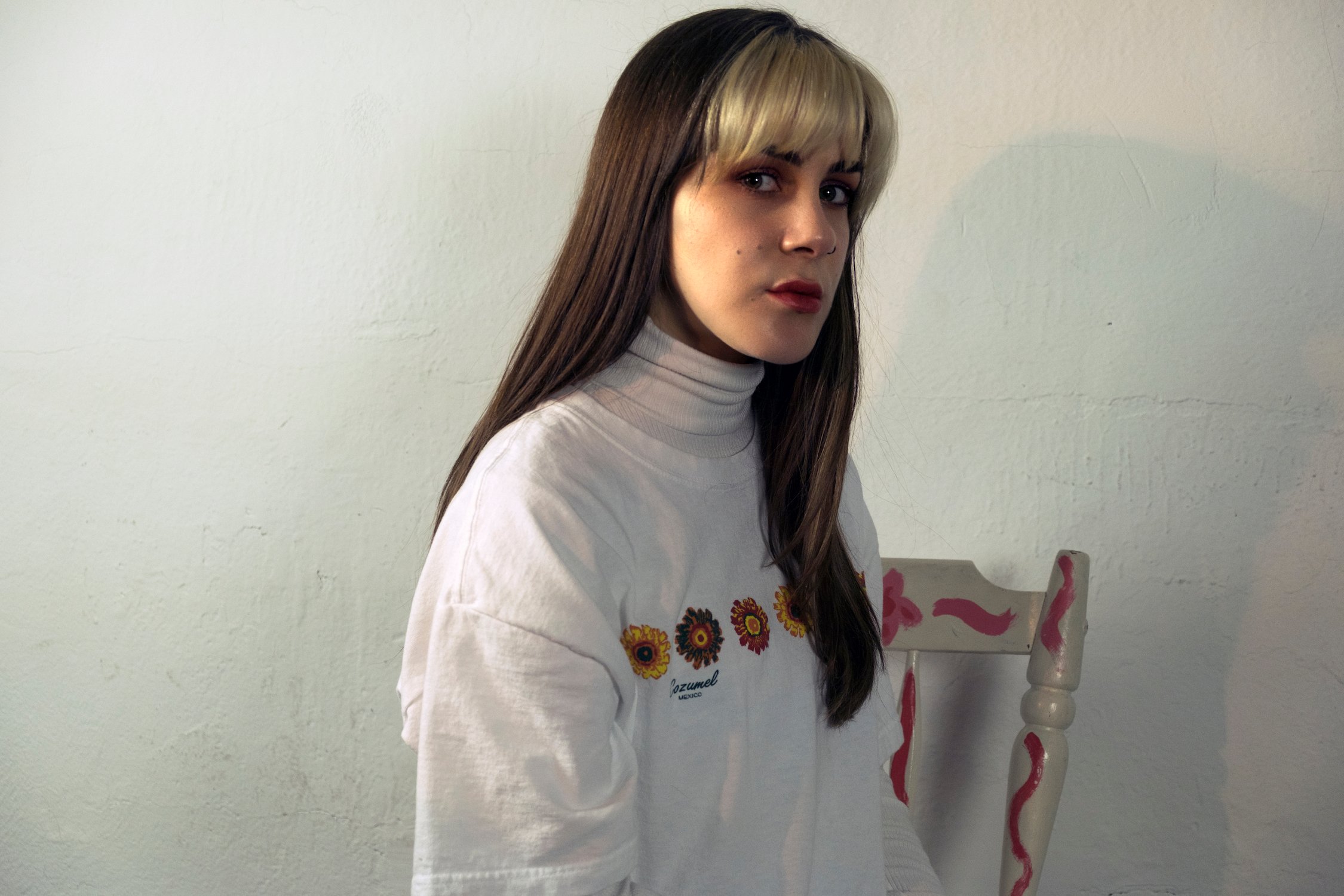 Aunty Social (Daniela Gitto) is bringing a compelling new sound to indie music with the release of her first EP, The Day My Brain Broke. Perhaps one of the most honest and vulnerable new artists, Aunty Social’s music captures an existential wandering that echoes the unapologetic rawness of Amy Winehouse. In addition to Aunty Social’s introspective and somber music, the accompanying music videos add another layer of creativity to the project. Her recent single “Crack A Deal” has caught the attention of the music world and was remixed by Jenny Lee of the celebrated indie band, Warpaint. We caught up with Aunty Social in an exclusive interview on her career beginnings and inspirations behind her compelling artistry.

Mark Benjamin: Thanks for chatting with me today. I really enjoy your music. Tell me who is Aunty Social and what’s the project about?

Aunty Social: Aunty Social is unsure of herself and her abilities. It expresses impulsively without a huge load of plans or even understanding what’s going on. There are a lot of feels and intuition and most of it is done in a way that I can’t really put words to.

Through instrumentation, lyrics, melodies, and all those different things, I’m able to create an emotion or a feeling that is a huge question mark in my head. It’s just a huge expression of my uncertainty in the world.

MB: How did you get started?

I started singing early in my life, but then in high school I dropped all my hobbies and was degenerate. Then I joined a band that helped revive music for me. Later on I was going through this really hard time. I needed to fill all of these things to feel less empty after I left behind this really toxic social life. And so I had bought a Mac and a DAW system and started trying to produce without any idea of what the hell I was doing.

I ended up creating some really interesting and unique sounding music, which I then brought to my producer and he kind of established an identity for each song. That helped me integrate my own experiences into my music which became Aunty Social and me trying to form a career out of it. And so it ended up blooming into what it is now. I’m still figuring it out.

MB: Is Aunty Social a play on ‘anti-social’?

AS: Yeah, I think it could go both ways. It could be a social Aunt at a party that’s always drunk or it could be a version where someones anti-social as a play on words.

MB: The title of the EP is The Day My Brain Broke. What day was that?

It was during one night. I mean, there are definitely a lot of different cracks that were put in my brain previous to this night. That night, I had had a really bad drug trip basically to the point where I went into a paranoid psychosis for a couple of days, very close to needing to go to the psych ward. It was scary. It was definitely everything that was happening in my life. And all of the things I was avoiding all came to the surface because of this one drug that happened to open the faucet to everything that was toxic.

I realized, ‘Holy shit, I’m not taking care of myself at all. And if I keep going this way, I’m probably not going to live a very long life.’ And so that was the day that I had a very Eureka moment where the next day I knew I needed to chill the fuck out.

That’s when I started becoming more self aware, analyzing my mental health problems, and trying to heal from past trauma, and focusing on myself without all of this escapism and avoidance with substance abuse and bad habits. It was a long process and I wrote this album during that healing process. I was kind of morphing this moment in my life where I was trying to face everything that I was avoiding.

MB: How did you go about meeting with Jenny Lee from Warpaint?

I’m a huge fan. It happened very naturally. We had a mutual friend who introduced us over email and she dug the song. We were looking for people to remix “Crack A Deal,” and so we had asked her and she accepted. That was such a great moment for me. I remember thinking she’s going to listen to my song. Just listening was a big thing. And then she’s reworking it and I’m going to have my name beside hers. I was like, sweet.

That’s basically why I am tied to mental health so much in my music and in my life. It really saved my life, saved it and changed it in all the best ways.

MB: I know mental health is such a big part of your work and addressing it. The chorus has become louder and louder in mainstream media and it has become less taboo. Even in Lady Gaga’s new music video “911,” the topic is addressed. Gaga has been very vocal about her struggles with mental health. I was wondering if you could elaborate on how it ties into your work?

AS: I grew up in a cultural environment where you kind of just have to keep in what you feel. It was very much like don’t ever let anybody know that you’re feeling down, or never tell anybody your secrets, or never show vulnerability. It was that type of atmosphere. I grew up as the third of the child in a family of outspoken Italians. I kind of just squeezed in my voice and squeezed in all my feelings.

I didn’t know how else to express these parts of me. I didn’t grow into any type of self-awareness until I was 22. When I finally realized that there are mental health issues, or just chemical imbalances in my brain that I can’t control, it actually was a huge sigh of relief because what had happened in high school and college was that I had these self-hating thought processes because I wasn’t being patient with myself and understanding with myself. I didn’t know that I had ADHD or an anxiety disorder.

I thought, ‘No, you’re just stupid.’ When I finally realized that there’s a community of people going through the same thing, and that there is help out there and I didn’t have to blame myself anymore, I finally felt myself to go out. I go from this one side of the spectrum where I’m never talking about my feelings to all of a sudden getting this merit to talk about my feelings, because I actually finally understand them. And now I can’t stop talking about them.

Mental health is as much a piece of my music as it is a part of my life. I’m in a constantly ever-evolving state where I’m trying to analyze my thoughts and trying to become the best person that I can be.

I started getting messages of people like ‘your songs really, really touched me.’ And ‘you talked about things that I’d never even talked about.’ I felt really good to be able to be a voice for people who are still in that state that I was in previous to this whole revelation where they felt they had to hold in all of these feelings. That’s basically why I am tied to mental health so much in my music and in my life. It really saved my life, saved it and changed it in all the best ways.