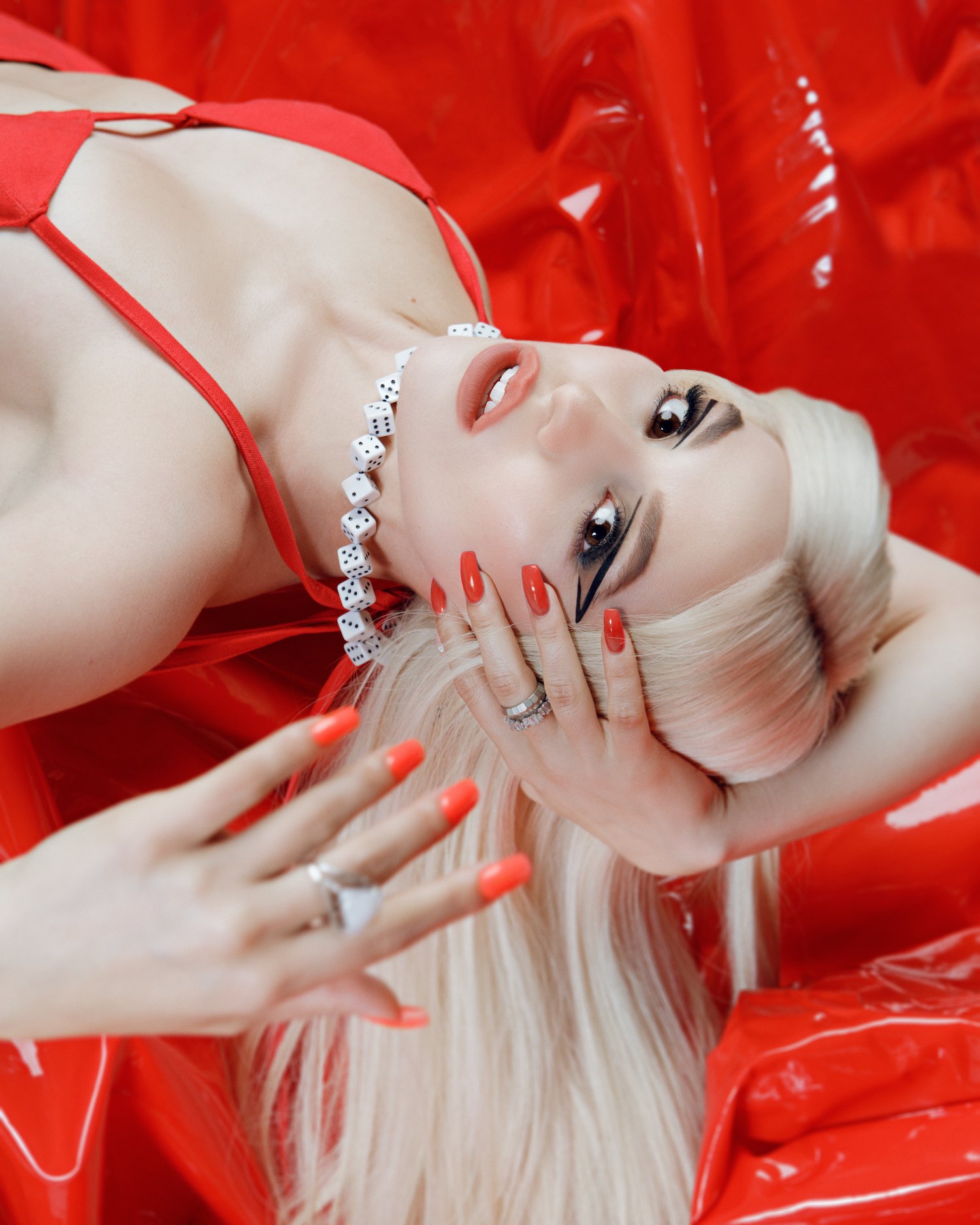 Ava Max (Amanda Koci) is one of the top female artists of 2020. The “Sweet but Psycho” singer has been streamed over a billion times and has gone three times platinum in the U.S., not to mention topping most of the charts around the world. The single was first released from her critically and commercially successful pop album, Heaven & Hell, which has also gone on to top the charts worldwide. She also has made some very innovative music videos. “Kings & Queens” has over 244M views.

Often compared to an early Lady Gaga, over the past few years Ava Max with her platinum blonde hair has struck a tune of her own. From her iconic haircut (one side is a cut short, while the other side is styled long) to her eye-catching and colorful fashion choices, Ava Max is bringing extravagance back into pop music.

Having initially recorded over one hundred songs for her debut album, Ava is no stranger to hard work and the grind. As she recounts in the following exclusive interview with RAIN, Ava knew at a young age that she wanted to be in music and has been fighting for her place in the industry ever since. We spoke to Ava on her early career, inspiration, fashion sense, and her breakout success with Heaven & Hell.

Mark Benjamin: Thanks for speaking with us today. I found your early beginnings very interesting. Your parents emigrated to the U.S. when you were young. I want to ask you about growing up and your early forays into music.

Ava Max: Yeah, I moved around a lot growing up. My parents were Albanian immigrants and they came to The United States with no money. They didn’t know the language. It was very hard for them, but I learned a lot from them.

Seeing my parents work from nothing helped me know that my dreams were possible. So, it was easier for my mind to grasp wanting to do something at a young age. From eight years old, I knew what I wanted to do. It was kind of a blessing and a curse knowing so young.

MB: How did you get in touch with the producer, Cirkut?

AM: I met Cirkut actually at his birthday party. My brother wasn’t there, but later on he told me he has known Cirkut for a couple of years. I was like, ‘wait, this is such a small world.’

MB: Talk to me about the making of your new album Heaven & Hell. It seemed like you came out of nowhere, but I’m sure you’ve been working very hard on it for quite some time. When did the first idea for this album come to you?

AM: Heaven & Hell means a lot of things for me. It doesn’t mean religion. A lot of people ask me that. It’s more about the ups and downs, the yin and the yang, the feeling that you have an angel on your shoulder but also a devil every time we make a decision. Heaven (side A), I wanted to be really light and bright, sonically produced. Then Hell (Side B), I wanted to feel darker with my single Torn living between both Heaven & Hell in Purgatory.

It actually started when I was on my way to the VMAs last year. I thought, ‘Oh my God, I want to call it Heaven & Hell.’ It was an epiphany. I was literally on the way to perform at the pre-show because I was singing “Torn” and some of the lyrics of “Torn” are torn in between heaven and hell. And I’m like, “Oh my God, this album needs to be called Heaven & Hell.

MB: I’m sure the experience of performing at the VMAs is also a kind of heaven and hell.

MB: I always think of all the award shows that the VMAs are the most fun.

MB: Are you more of a home body?

AM: Yeah, I don’t love the red carpet. That’s something I don’t like. It’s tough for me, but I love to dress up, but I don’t like all the attention.

MB: That’s funny. I want to ask you about duality because it seems to be such a prominent theme in your music, in your image, and even in your haircut. I read how you came up with the name Ava Max – Ava is feminine and Max is masculine. Why is duality so important to you? I’m sure the fans go crazy because there are a lot of Illuminati references in there, too.

AM: I feel we are made up of dualities, all the time. If we want something, there’s always something good coming our way and there’s always going to be something bad. We have to be prepared for the bad. Growing up, I had a lot of friends who would say, ‘Be super positive. Don’t think about the bad.’ My parents always taught me stay positive, but you have to be prepared if anything bad happens, too. So, it’s kind of a double-edged sword. You’re not always going to be happy all of the time and that’s okay.

“I think the thing about fashion is it’s like anything you have to learn about, and learn what you love and don’t love.”

MB: Your big hit “Sweet but Psycho” just hit a billion streams. I think the topic of the song is something everyone can relate to and that’s partly why it’s such a huge success. So, I was curious were there any specific moments or memories that you have that were either sweet memories or psychotic memories?

AM: I’ve had sweet memories talking to my fans – having my gatherings with fans all over the world. That’s been incredible! When I went to travel, I learned so much about every country and that I have fans in every country. So, that makes me feel closer to my fans.

For psycho memories, I had a stalker come to my parents’ house last year while I was on tour. I was on tour and this guy flew from France to look for me and it was so creepy. He had flowers and he was insisting that I took a picture in front of the door at my house. That it was in fact my house. My mom was so funny. She messed up my name like, ‘Pava? No, we don’t know her.’

AM: No, he didn’t. He stayed around all day. My dad didn’t call the cops because he felt bad for the person. He’s a very sweet person. My dad will give people like fifty chances.

MB: Wow. Yeah, that is a little psycho.

MB: Your fashion sense is really amazing. We’re a fashion magazine first, so when I saw you were wearing Margiela boots on stage, I was thrilled.

AM: Thank you. Oh my God. I have three more Margiela shoes I haven’t even worn because we’ve been in a pandemic. Where am I going to go?

Am I going to go to the grocery store with my Margiela boots and my Burberry bag to buy some black beans?

MB: Do you have any favorite designers? I saw Christian Cowan is always commenting on your Instagram.

AM: Oh my God. I love him. He DM’d me to do a charity even with him recently. It was so much fun. He is such a sweetheart and I just loved him. I’m a huge Louis Vuitton fan. I love their suits. Like I’m obsessed with Louis Vuitton suits. I don’t know why.

It’s strange. I got into fashion when I was a little girl, but I never really got into all the designers until I was twenty. Then I started loving it so much. I think the thing about fashion is it’s like anything you have to learn about, and learn what you love and don’t love.

MB: Totally. I tell everyone all the time, to really love fashion you kind of have to hate it.

AM: You have to also play. I think a lot of people are like, ‘Oh, I would never wear that.’ It could be something that’s crazy, but fashion is all about wearing something you feel, and something that maybe is not on trend, you know?

AM: Exactly. If you want to wear something crazy, fashion is how you do it.

MB: What’s next for you? What do you want to accomplish with your next, whether it’s an album or a new single, or whenever the tour resumes…