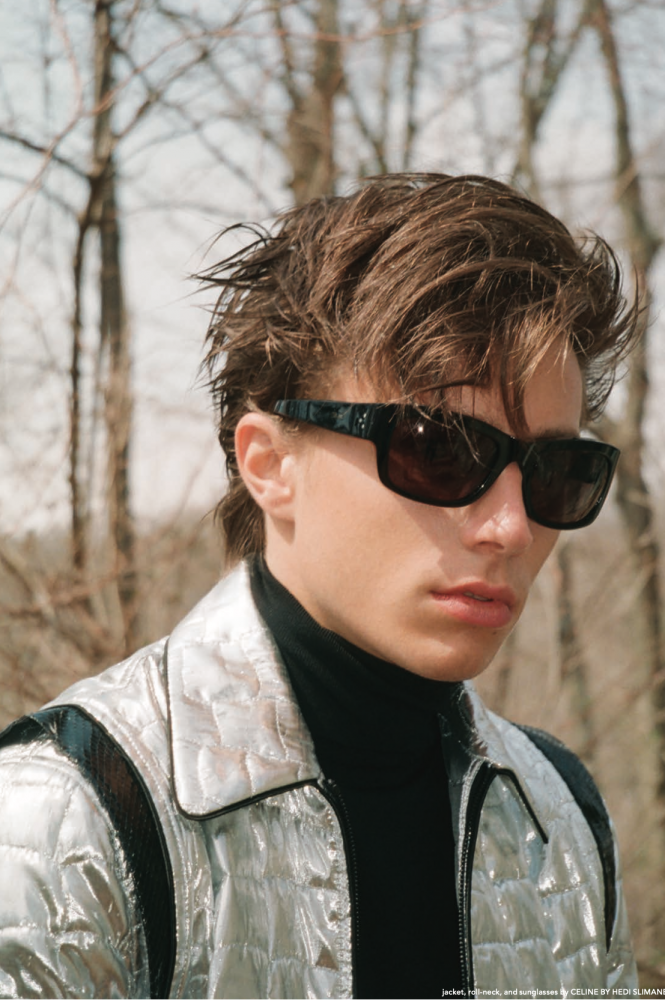 All by CELINE by Hedi Slimane

The 21-year-old actor Axel Auriant is best known for his part as the brooding and confused Lucas in Skam France, the French remake of the hit Norwegian web series Skam. Centered on a group of high-schoolers—with each season focused on one character specifically, and each episode shared online with accompanying Instagram posts on the characters’ personal feeds— Skam is a highly relevant, powerfully delivered study of contemporary teenage life that has garnered itself a huge international following for both iterations.

Axel Auriant is magnetic as Lucas, the determinedly straight and guarded protagonist of season three, who despite his best efforts, finds himself falling in love with Eliott (Maxence Danet-Fauvel), a new male student at the school. “I like to play teenagers because it’s a really important time in life,” the actor says over the phone from Paris. “It’s when you discover your personality— what you like, what you don’t like, what you want to take from your parents, from school.”

In Auriant’s case, this voyage of self-discovery began at 16. “I’d been part of a children’s theatre company in Paris when I was 12,” he says. “But after one play, I decided I wanted to be a drummer—I’d been very musical since the age of four. It was only after I met my first love, when I was 16, and it ended after a year, that I really fell for theatre. We were studying Molière in French class, and I suddenly understood how much you can express through the words of other people, how you can channel your own emotions into them. I knew then that I wanted to act.”

After that, things moved fast. Auriant secured an agent and began appearing in commercials for brands including Balenciaga. “My parents said I had to finish my baccalauréat before I could act,” he explains. But fate had other plans. In the build-up to his exams, Auriant and his bandmates were stopped on the street by a casting agent on the lookout for young actors/ musicians for a forthcoming film: Émilie Deleuze’s indie coming-of-age drama, Jamais contente. “We were really lucky because we perfectly matched the descriptions of the characters—mine was a drummer with a lot of hair—and we were cast!”

“Before each love scene, Maxence and I said, ‘If we can help just one person understand their sexuality better through this, we’ve won. I have 20,000 messages on Instagram. Some make me cry, because people say I helped them to come out.”

After graduating, Auriant took a course at the famous French drama school Cours Florent, before taking a role in a children’s Christmas play at Paris’s Théâtre des Mathurins. “I was in it for two years,” he says. “It was an amazing experience, because kids are the most honest audience—if it’s not funny, they don’t laugh.”

But it was 2017 that proved to be the pivotal year for Auriant: he was cast in Cédric Chapuis’s one-man play, Une Vie sur mesure, about an autistic drummer— “It’s toured internationally for three years now, and I have four performances left,” he says wistfully—and simultaneously secured the part of Lucas. “I was filming Skam from 6 am until 6 pm and then jumping on a mototaxi [motorcycle taxi] to the theatre for 7 pm. It was exhausting but very cool,” he laughs. “I feel I grew up with both my characters.”

Watching Skam France, which first aired in early 2018, it’s easy to see how much of himself Auriant gives to his roles. “I wanted the audience to laugh with Lucas, to cry with him, to be with him,” he says. He applied the same mentality to the many sex scenes involved. “It’s just part of life, of love. I wanted to show every part of Lucas’s journey—physical and mental. Before each love scene, Maxence and I said, ‘If we can help just one person understand their sexuality better through this, we’ve won.’” As it turns out, Skam France has had a much bigger reach. “I have 20,000 messages on Instagram,” Auriant says. “Some make me cry, because people say I helped them to come out.”

Auriant and his Skam castmates are currently waiting on the green light for seasons five and six, but he’s keeping himself busy in the meantime— he’s just purchased a music studio and is setting up his own theatre- production company, alongside acting. “I’m in a new one-man play in Paris, Les 1001 vies des Urgences by Baptiste Beaulieu, and I’ve just shot Slalom, a film about a French ski team by Charlène Favier,” the young polymath enthuses. And what about his dreams for the future? “I just want to keep taking on roles that move me, and hopefully others. And if I’m not acting, I’ll open a pizzeria.”

An interview with musician Jehnny Beth