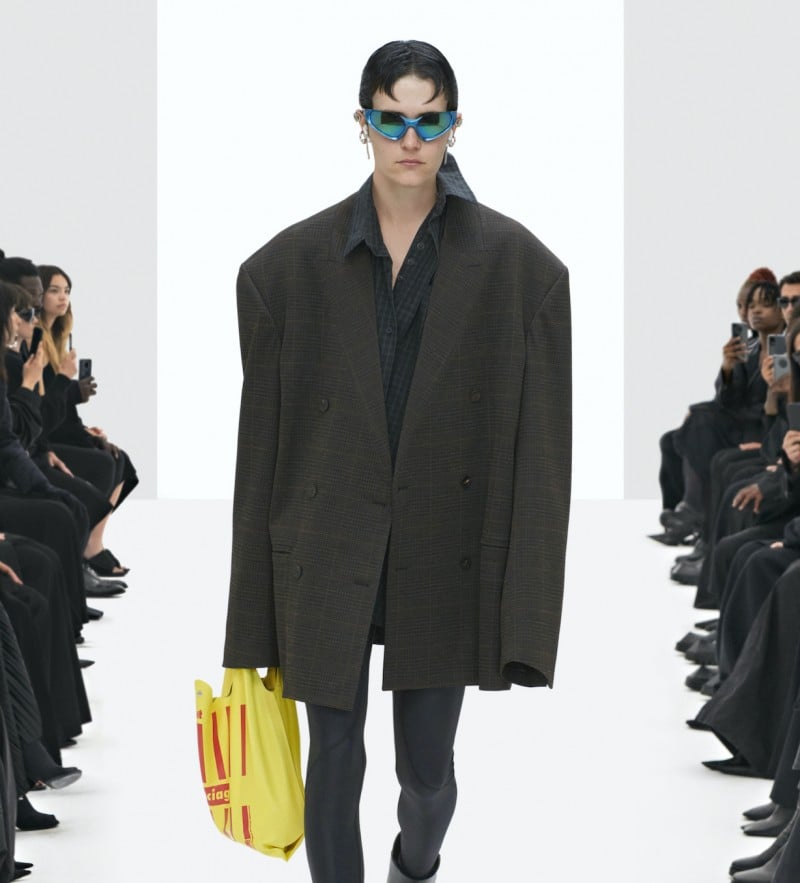 Demna Gvasalia, Artistic Director of Balenciaga, unveils a collection ‘Clones’ that nods to its aesthetic roots by way of doing what Balenciaga does best: questioning design philosophy through parody or exaggeration – this time its own.

The show titled ‘Clones’ began with a question from Gvasalia, “what’s real and what’s fake?” Does it matter? Aptly so. The entire show was rendered and modeled by Eliza Douglas using high-tech CG scans and deep fakes. You may notice every model is the same – this was achieved by digitally pasting her face on body doubles. Even the audience consists of copies of real people.

The forty-four (men’s and women’s) look collection opened with an all black veiled look that recalled Hussein Chalayan’s well-known Sakoku Spring/Summer 2011 collection. The second look illustrated the impact of one of Balenciaga’s original design silhouettes: a coat with exaggerated proportions, oversized rubber combat boots, and a dark yet relaxed attitude. This doubling down on the brand codes through hyperbole is seen more clearly with oversized shirts and blazers, leggings, and boots…essentially destroying the frame of one of society’s longest standing and most rigid men’s pieces, the formal sports jacket.

For the many naysayers who feel Gvasalia has stripped the brand history from its archive or vision of Cristobal Balenciaga should take solace in the fact that Cristobal was a master at exploring and presenting radical proportions just as we see on full display in this collection.

Plissé, prints, shirt jackets, trench coats, and a playful exploration of sportswear/formalwear necklines made this one of Balenciaga’s strongest recent collections. Also of note was the response to Alessandro Michele’s last Gucci collection where Balenciaga was appropriated, or as Michele described, “grafted,” into Gucci earning the cringey moniker, “Gucciaga.” Now in this SS22 collection, Gvasalia has created a series of bags that recall Gucci’s classic equestrian design except now feature the Balenciaga logo and is described as “not a Gucci Bag.”

Finally, the show ended on a humorous note with an off-kilter red dress with a theatrically low skirt. This collection, if looked at as a greatest hits of its own parodic designs, begs the existential question: if this is fashion now then what does whacking it with an ironic sledgehammer achieve? We’ll have to see what adding another post to post-modern looks like for Gvasalia’s Balenciaga.

Explore the full collection below. Images courtesy of Balenciaga.