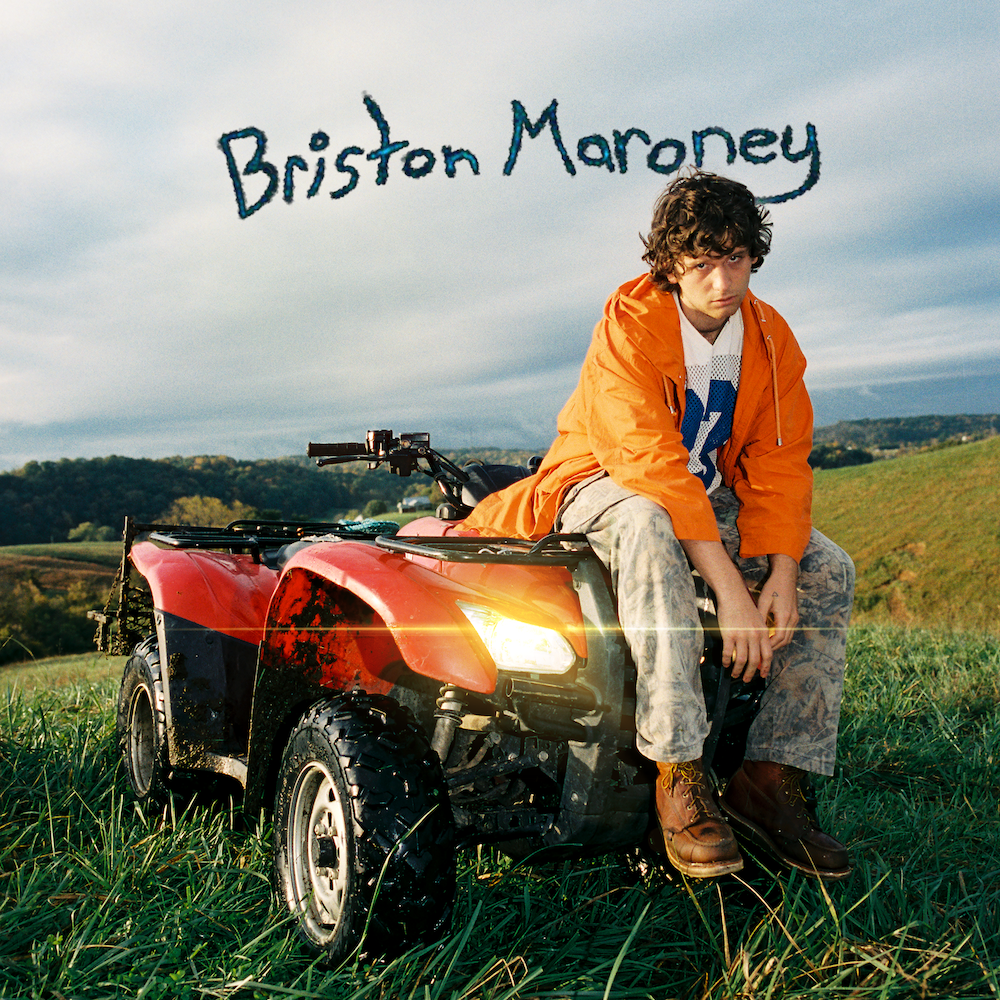 Briston Maroney releases a new album today, Sunflower. Though the ambitious project may seem effortless, it is the culmination of many life experiences and songwriting that took place over the course of several years. Maroney recently became a huge name in music after his song “Freaking Out on the Interstate” went viral on the video sharing app, TikTok.

Briston Maroney had been making music his entire life; he got his start like so many out in Knoxville in the Bluegrass scene. Since then, Maroney has been through some dark times and some good. This album Sunflower which familiarly harkens the forced yet sincere optimism of Blind Melon and the carefree spirit of Weezer is an album worth diving into. Funnily enough, the name RAIN magazine similarly comes from Blind Melon’s hit song, “No Rain.” We caught up with the musician in an exclusive interview with RAIN, below. Stream the album here.

Mark Benjamin: How are you doing? Thanks for taking the time to talk to us today. There’s quite a lot of exciting things going on in your world.

Briston Maroney: Thank you for having me.

MB: I’m curious to hear about your musical journey and roots. I read on Wikipedia that you started out in Knoxville and then you tried out for American Idol. I’d like to hear about the journey from you.

BM: Those are definitely accurate. Wikipedia probably makes it sound more fun than it actually was, to be honest. I didn’t have too wild of a story. I definitely moved around a lot in early stages of my life in a couple of different cities in Tennessee. My mom moved to Florida when I was young, so I would go between Knoxville and this tiny island town called Fernandina Beach in Florida. I became used to moving around and traveling early on.

Music was always a pretty consistent thing to have wherever I went between my two folks. I could go to either house and have a guitar there and know that I could escape whatever was going on. Not that I needed to do that often. I got lucky because my escape from the pain and growing up was something that I genuinely enjoyed doing.

Music seemed to help me move around easier. I didn’t think that I would ever sing until I started writing songs. The first songs were really cringey, I’m glad it’s not documented.

MB: Were you a part of a music scene in your youth?

BM: Sadly, I was very invested in an Americana Bluegrass band at 15. Knoxville had a pretty specific sort of scene and tone to it, musically. There was a solid group of people that were helping me get opportunities to play. I played a lot of farmer’s market kind of stuff. We played literally more than one tractor festival. It was the most nourishing and kind place ever. Everyone was excited to see a young kid playing a guitar. my folks were supportive as well.

MB: When did you start to find your own artistry, your own voice as Briston Maroney?

BM: When I moved to Nashville for school, I was able to look back and see everything that I had been and no longer wanted to be as a person and musically. By that time I’d run the gamut of playing in Mumford and Sons cover bands…I did the American Idol thing and that was fun but not necessarily the avenue I wanted to go down. When I got to Nashville, I tried the opposite of these things. Immediately, I swept into the scene there and started playing a lot of rock oriented stuff and anything that felt edgy, which isn’t hard to do compared to American Idol and Bluegrass. It was around that time that I started pushing myself in directions that I’d never been.

MB: You went through quite a bit of a struggle over a couple of years. Traveling, trying to find yourself, and, of course, those things are extremely painful, but then, the silver lining is a lot of the times it can bring a lot of inspiration. It can give you clarity. Did you have this kind of experience?

BM: One hundred percent. Looking back on everything, I was trying to do the opposite…trying to be someone that I wasn’t just to see how it felt. It included a period of time where I was partying, drinking heavily. I totally lost touch with myself and went down a really dark hole for a while. I did a little stint out in California, for two months in a rehab center. It was funny at the end because I thought, “man, I didn’t need to go through all of that to know who I am.” I feel like we all know who we are. It’s just very scary sometimes to accept that you can be who you are and that you can be enough and that it doesn’t have to be more than it is.

“Honestly, it’s been so wild. It just makes me laugh. I can’t not just laugh from a place of gratitude at the thought of this becoming what it became.”

MB: It’s such a seemingly simple thing but actually one of the hardest things. I think many people never even reach it.

BM: Yeah, absolutely. All you have to do is just be but that’s so hard to do.

MB: So, things were looking hopeless or bleak. And then only a few years later you have one of the top streamed songs. I read your album has one of the highest physical sales of all of Warner Music’s artists. How does that feel?

BM: It feels like someone is making fun of me. If you actually think this is real, no, like you don’t get to be next to Fleetwood Mac in physical sales. Honestly, it’s been so wild. It just makes me laugh. I can’t not just laugh from a place of gratitude at the thought of this becoming what it became.

I put music down for a brief spell when I was getting straightened out. Later on, I came back to it from a place of I’m doing this because it makes me happy. I love to do this because that’s what I want to do with my entire life. Taking the mindset of like whether or not this works, I still love this. Having so many amazing opportunities; I’m just so thankful.

MB: Your new album, Sunflower comes out today. You wrote it over the past few years, right?

BM: So, that started when I got to Nashville, a couple of those songs were some of the first songs I wrote in Nashville. Over time, we’d group those together and go through a hundred other songs or something. And then over those couple of years, I got to meet up with a bunch of writers that I really loved. And so they contributed too. It’s definitely a culmination of all of the things I talked about. Like creatively putting it together.

MB: Are there any specific songs on the album that you’re especially proud of or looking forward the most to sharing with your audience?

BM: There’s the last track on the record. It’s called, “Say My Name.” I’m excited to share a song that came from my darkest time, like right before I left to go to rehab, that was literally like a week before. It’s kind of broken and vulnerable in comparison to some of the singles. I’m stoked for people to hear this as a complete project. To see the side of me that loves Weezer but then also the side of me that genuinely didn’t know that I could ask for help.

MB: It’s so weird. People are split about Weezer. I feel like half of people love Weezer and half of them make fun of it.

MB: Sort of how Lily Allen takes satire as far as she can take it.

BM: Absolutely. I love that so much. It is done wonderfully. I’ve been a fan of Weezer since I was young. They were the first band that gave me my first look at irony and I have a weird relationship with it now…I try not to lean into it too hard.

MB: Are there artists around that era, maybe like Blind Melon or any of those musicians that sort of stuck with you?

BM: I do love Blind Melon. It’s funny that you say that, the singer from that band, Shannon Hoon, is one of the coolest people ever. I’m fascinated by them. I did grow up on nineties music. My pops grew up in Atlanta in the nineties and was listening to Smashing Pumpkins and Nirvana and Pearl Jam all the time. And, so, I grew up listening to that, so it was probably the most formative music to me, but I also love old songwriters. John Prine is my favorite artist of all time.

MB: Tell me about “Freaking Out on the Interstate” and how that song came about. Did you have a moment just freaking out on the interstate?

BM: I certainly was freaking out on the interstate at one time in my life. I wrote that song in college thinking that it would be a song that I was going to play. I remember we had a show booked, like a week or two after I had written that song. And I was stoked to be like, “Oh, we can play a new song to this show.” That song was out for two years and then out of nowhere, it fell in the hands of sweet, sweet TikTok. Then this wild thing that I never could have guessed happened.

MB: How is it used on TikTok?

MB: Do you have live shows planned for the new album?

BM: We’ve got some dates booked for some drive in shows which, right now is the only thing we feel kind of comfortable doing as far as live shows. As soon as we get the green light that it’s going to be a fully safe thing to do real shows, we’ll be booking as much as we can and filling the calendar. We’ll have those dates in May and just gonna be sprinkling some other stuff throughout the year. And then hopefully at the top of next year we’ll be able to tour this record, like full force, which is my dream.