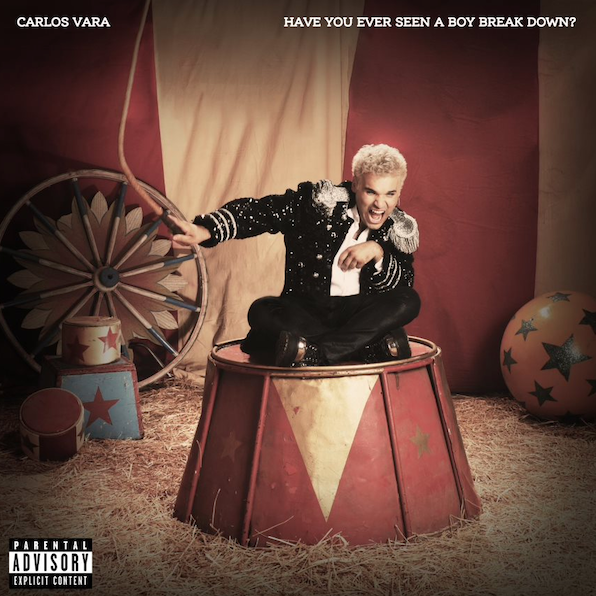 'Have You Ever Seen A Boy Break Down?' EP Artwork courtesy of Warner Records.

Emerging singer-songwriter Carlos Vara releases his first EP Have You Ever Seen A Boy Break Down? with Warner Records today. The EP invites the listener into a deeply personal and emotional journey where each song is inspired by Vara’s personal life experiences. We catch up with the emerging pop sensation on the eve of the release in an exclusive interview for RAIN. You can also stream the EP below.

You have a very unique upbringing and story on how you got into music. You grew up in the southern United States, right?

Yeah, I grew up in Columbia, South Carolina. My parents were nightclub owners so I always was surrounded by music and performance. As a kid I fell in love with writing; I wanted to be an author when I grew up. I loved singing, too, but I was always too scared to sing in front of people because I was so shy. It was a small town and I didn’t know anyone who did anything or went on to do anything creative. I didn’t know what was possible.

When I was seven, my dad had a big transition and became super religious. From then on I was surrounded by the church and church music. Growing up in the south with a religious family, writing songs and singing became a means to pass off my emotions.

Then around the time I was fifteen, during my freshman year of high school, I found out I had Tourette’s syndrome. It was really bad. The muscles in my back started ripping so I had to leave school for about a year. I spent a lot of time alone in my room, singing songs on YouTube. I also discovered a lot of music like The Beetles, Beach Boys, and Queen. These acts that were loud and proud and added a lot of dramatics into their music. My parents were young so they didn’t listen to these classic groups when I was growing up.

Finally, when I was seventeen I moved to Nashville. I knew a songwriter there who was a kind of a mentor to me. The three years I was there shaped me into the artist that I am now.

How was the transition to L.A.?

I’ve only been here a few months, but I’ve been back and forth for a while now. It’s so different. My parents were pretty Pentecostal. You know like my family speaks in tongues and passed out on the Holy Spirit. I believed everything I had been told. I thought I was cursed. After I moved to Nashville my world opened up. I had lesbian neighbors. I made an atheist best friend. Everything I knew was being challenged and opening up my mind to things I had been told were bad.

I remember coming to L.A. where everybody’s loud and proud and extreme. I’m very dramatic too and can be very loud, but I’m also sensitive. It was a lot coming from a place where I thought I was the only gay person in the world. I’m still learning to love myself and accept myself. That finds its way into the songs I write, too.

There are a lot of different genres a songwriter can express themselves in? Why was it Pop music for you?

I never sat down and thought it had to be pop music. It kind of all melted together that way. My mom was twenty-one when she had me so when I was a kid whatever my mom was listening to on the radio like Britney Spears, Whitney Houston, Christina Aguilera, Celine Dion…these crazy talented vocalists combined with the soul music I was exposed to at church where people are singing to evoke emotion. That and digging into the music of The Beetles and other popular groups it just melted into what it is now.

I love songs. I love lyrics. Pop music allows me to do whatever I want.

Yeah the best thing about being an artist like Taylor or even Britney Spears is it’s just a reflection of yourself as a human being. Who knows, in ten years I might come out with a dark heavy metal band.

Tell me about the new EP that released today, Have You Ever Seen A Boy Break Down?

Yes, so the EP is inspired by my journey, some of things I talked about before like struggles growing up, self-discovery, and being exposed to L.A. The EP represents an introduction of myself, my heart, and who I am. Every song was written for a specific reason…something that happened in my life and something that I needed to get out.

For example, the song “Impossible” is inspired by a phase where I really hated myself and became depressed because I felt guilty about being gay. The mental trauma of learning to love myself is what that song is about.

The title track “Have You Ever Seen A Boy Breakdown” ties it all together. I remember writing that song as a spiritual process. I need to close my eyes and sing what’s on my mind. It was part of a vision I had of myself crying and freaking out in the middle of this circus because I’m a mess. Everyone is cheering me on and celebrating that.

That song, this whole experience, represents how I never felt important or loved. I wrote it around the first time the labels were reaching out to me. I felt like people actually believed in something I did or thought what I did was beautiful or special but only believed in me now because I’m so hurt by the world and have started to cry it out.

It’s like I’ve had to have a break down in order to get recognition by the world. I’m excited that it’s finally coming out though. I hope the music allows people to fully feel every emotion on a song and are able to connect with it whether it’s a feeling of being happy or sad.

Do you have plans for the live show?

Yeah, one of the things I’m most passionate about are visuals. I love the creative possibilities around a live show. I’m diving in with my team, asking myself how do I want the show to look? To feel? What kind of experience do I want to give for the live show, especially visually.

Stream Carlos Vara’s on Spotify, below.

Kim Jones releases book on one year anniversary at Dior