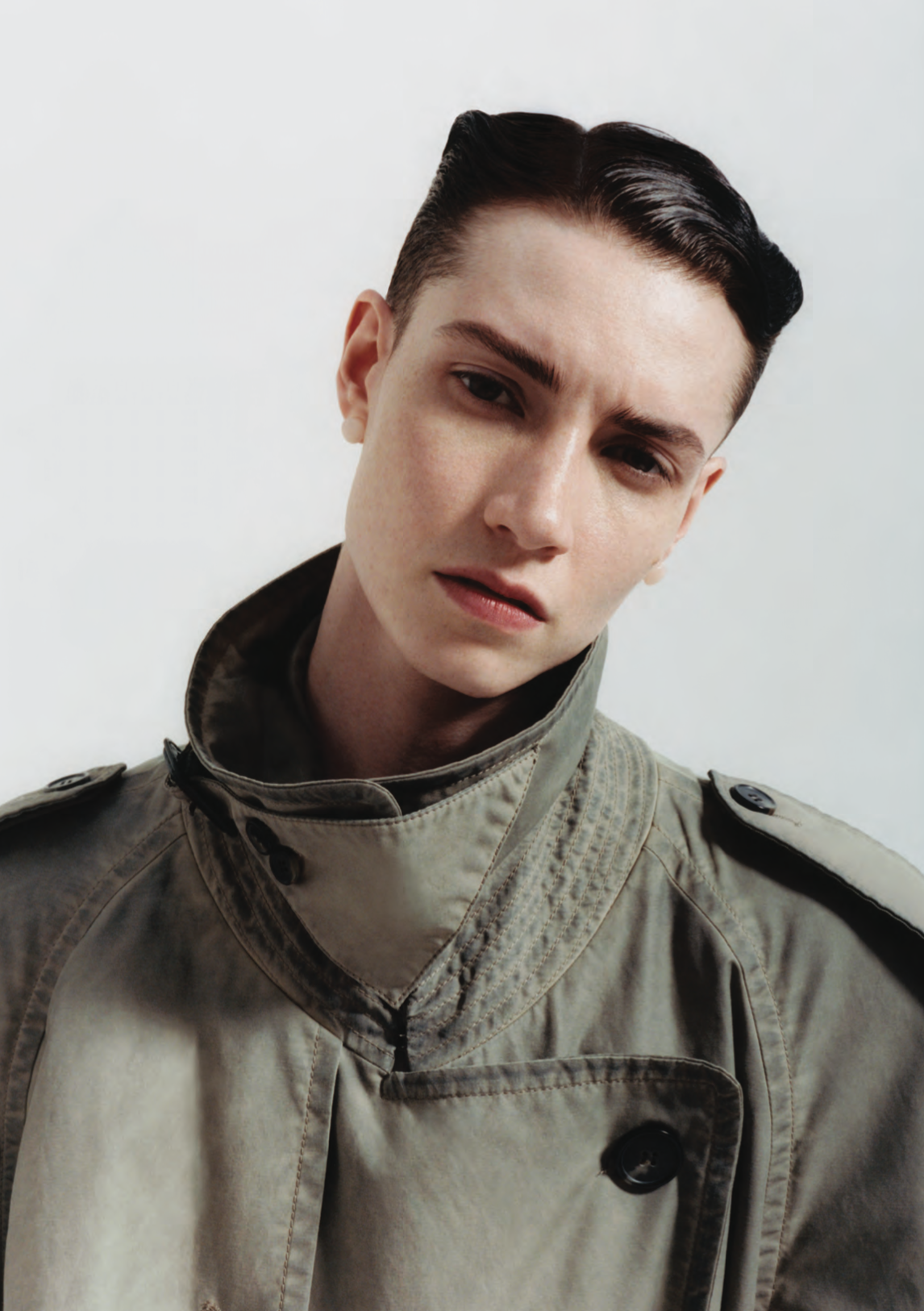 While I was approaching the work of the 24-year-old Canadian model Krow Kian, I could not help but think of a particular image of two bodies merging together, creating a new one. I am referring to Abstracting Attraction, the 2015 performance by Mathilde Rosier realized for Volcano Extravaganza, an annual festival of contemporary arts that takes place on the magnetic and transformative Aeolian island of Stromboli, near Sicily, which is home to one of the world’s most active volcanoes.

Like the volcano itself, the bodies were silently erupting in a composed dance, fusing, confusing, and recreating their identities, while the voice of the artist repeated the mantra, “I am the abyss. The bottom of my soul has so much depth. Neither joy nor sorrow can reach it. I am bliss.”

In Krow’s TRANSformation (2019), the film directed by Gina Hole Lazarowich, the transition from the abyss to the bliss of the soul represents rebirth. Where the previous identity finishes, the other starts, just as in Rosier’s performance. Kian himself talks about posing in front of the camera as a sort of performance in translation.

For RAIN, using Virginia Woolf’s flamboyant character Orlando as our starting point, Kian and I talked about what it was like wearing a skin that wasn’t his, discovering his identity, and escaping the stereotypes—and in the process, defining a new and empowered vision of one’s self that’s ready to blossom.

Milovan Farronato: I must confess that seeing photographs of you made me think of Orlando, the androgynous and immortal character created by Virginia Woolf. Over the four centuries covered by the novel of the same name, Orlando remains trapped in the labyrinth of time and in his own identities by the desire of his elderly patroness, a sentiment so strong and determined that it turns into an enchantment.

Having lost the possibility to grow old, Orlando is left with no alternative but
to change from a man into a woman. What is your story? What was your enchantment?

Krow Kian: My story starts with me as a young kid who didn’t see the difference between gender. I grew up viewing people as just people without a specific difference of gender until I was 11 and my school separated boys from girls for sex-education class. At that time I felt horrified by what would happen to my body through puberty and I wished I could just be one of the boys, out playing sports instead of learning about periods and pregnancy.

It wasn’t until I was 15 or 16 that I found out females could transition into males, so it was a huge relief that I wasn’t the only person in the world who wasn’t happy about the body I was born with. I knew I was going to transition but I wanted to wait until I was at least 18, so that I I could transition without needing the approval of my legal guardian. I didn’t know how my mom would react because so many of my transgender friends had been disowned and kicked out of their homes and families just for wanting to change their bodies.

I was known as a male and went by the name Krow with close friends when I was 16, but I officially transitioned when I was 19 with the support of my mom. I’m now 24 and have done hormone therapy for four years and had a couple of surgeries.

You asked me what my enchantment is—I feel that it would be knowing who and what I am at such a young age and having the strength to make my body match my heart, regardless of others’ opinions.

“Many brands give a voice to people who are being treated differently because of the people they love, the body they choose, the skin color they are born with”

MF: This year I had the pleasure and honor of curating the Italian participation at the Venice Biennale. The Pavilion literally became a labyrinth, within which I dispersed works by the selected artists. My mission was to offer a reflection on being in transition between dimensions, such as between life and death.

I wanted to offer the possibility of an extended time where one could think about one’s own existence. In the labyrinth, the aim is not to find the way out but to find the center and enjoy the time spent in transit in all of its complexities. Did you ever get lost? And how many times did you find yourself?

KK: When I was 12 I knew I wanted to be a boy but
I thought there was no option to change, so I feel like I found myself at that point in my life. After that I never really felt lost, but many times I felt completely alone, wearing a mask that someone else had painted, like my skin wasn’t even my own.

MF: Do you think that we are living in interesting times?

KK: The times we’re living in are quite interesting because of the possibilities of the future. With global warming changing the weather and environmental conditions around the world, we are teetering closer to extinction, but at the same time there are many ways to work together to fix the atmosphere, if everyone would just agree to fix the problem.

Politically, we are also living in an interesting time, because some countries are forward-thinking and trying to do the best for their people, while others are controlling and abusing their power, but no one is brave enough to step in.

The balance of the world shakes back and forth every day and no one can expect a specific outcome for the future, so I believe we are living in some of the most interesting times.

MF: Do you believe in the value of emancipation that fashion can give? Many brands, such as Maison Margiela and Gucci, have chosen to do coed fashion shows or collections in which men and women coexist and merge.

KK: Fashion has always been one of the first industries to look at social issues that everyday people face and one of the first to try to normalize freedom for people to be who and what they are. Many brands give representation and a voice to people who are being treated differently because of the people they love, the body they choose, the religion they believe in, or the skin color they are born with. I think fashion blending and blurring the lines between gender is just another step in showing how all humans deserve to be loved for their hearts and not their physical features.

MF: I am an art critic by profession. I wanted to show you a painting by the artist Leidy Churchman, who went through a similar journey to yours. It is one of my favorite paintings, and I would like to ask you how you feel in front of the emptiness of this double bed that the occupants have left, but their traces remain on the pillows. In the foreground, ancient- Egyptian, ritualistic scenes appear to be drowning in the same depth of a dark sea that has mysteriously allowed crocodiles to emerge. What is your gut reaction? And, if you will, your analysis?

KK: Overall, seeing this painting fills me with a sense of calm, despite the danger associated with crocodiles. I think the bed looks comforting and that the ocean blanket would swallow me up like a dream of distant lands. I am quite curious as to who the figures under the pillows and blankets are, though—perhaps the occupants never left the bed at all and are being pulled into the dream world bordering life and death. I’d like to think they are dreaming of the Egyptian scene of the rats laying siege to the castle at the bottom, but what side of the war they are on, I do not know.

MF: Runa Islam, another artist I love, in a short from 2009, filmed a thaumatrope, a small piece of apparatus from the start of the 19th century that was used to investigate optical mechanisms in the early days of cinematography. On one side of a small disk connected to a rotating crank was a picture of a bird on a perch, and on the other, a cage.

The magic vision produced by quick rotation of the disk made the retina unite the two images, showing the bird trapped. I believe The Restless Subject, the title of Islam’s work, is about and against stereotypes, and how society wants to place us all in the cage of their vision. Islam herself has been an artist in transition, from Bangladesh, from where she had to escape as a child due to civil unrest, to England, where she was naturalized. You have also been a restless subject—how has it been to move between contexts and places? Do we really belong anywhere or are we always in exile?

KK: Traveling has definitely given me a different perspective of the societies and lives of the everyday people living in the places I’ve visited. In some of them, I feel completely out of place, either because of the way people look at or treat me, or because of the very structure of the city itself. I have, however, found places where I feel like I belong, places I connect to more strongly than where I was raised. I think there truly is a place for everyone to belong to, but not everyone gets the chance to find that place.

MF: In the photography in this feature, you look like you are posing, following the steps of a specific choreography. Maybe even an alphabet. If they could become words, what would they say?

KK: I think some things can’t be expressed through words, only through actions, movements, or expressions. If my poses were to become words, I don’t know what they would say, but when I have the freedom to move in front of the camera, I like to think I’m expressing a dance and song from within my soul.

all clothing and accessories by Maison Margiela

Planningtorock ‘gender is just a lie’