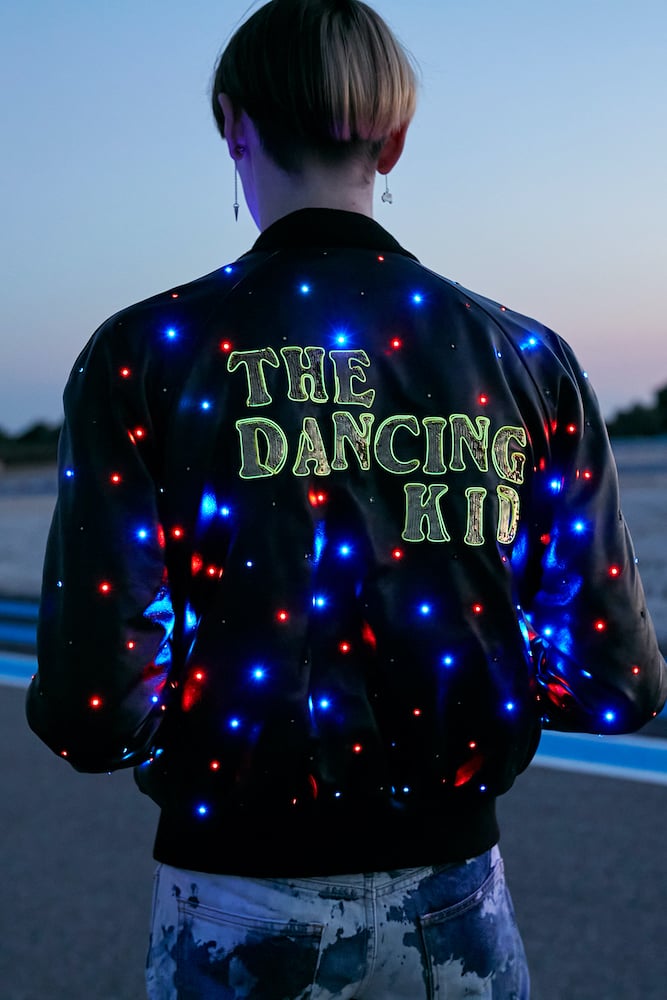 Hedi Slimane, artistic director of Celine, presented the Men’s Summer 2021 collection, “The Dancing Kid” as a dazzling online video shot at the Circuit du Castellet in France. Described by the house as a ‘teenage romance,’ the collection is an innovative departure from the previous men’s collections that we have seen from Slimane.

The relaxed silhouettes pay close attention to how the youth dress today and cleverly transform this language into an elevated and liberating collection. One of the most interesting aspects is the focus on the statement piece. From an aesthetic point of view one can lay claim to a number of different identities and personalities in the collection. We see everything from tie-dye to tiger stripes to sophisticated knitwear to varsity jackets and windbreakers. For example, trucker hats walk with chokers and earrings, glow-in the dark bombers walk with acid-washed jeans…one model with a tattoo, a symbol of the goth metal Finnish band HIM, walks with an oversized argyle cardigan. You cannot really place a defined identity for this collection and that is exactly the point.

The youth today, through a myriad of internet influences, don’t lay claim to a singular identity but rather a post-modern jumble of various ideas and aesthetics that often clash at times. It is ultimately an attitude of ownership and a never ending quest for newness that defines them.

It is refreshing to see a creative director connect to what’s bubbling in the youth and where these expressions of coolness emanate. The house describes the collection as “a candid portrait of a generation that took advantage of the confinement and isolation to assert itself and emancipate itself creatively…”

We couldn’t agree more, and it’s also important to point out that this generation has been self-isolated vis-à-vis the internet long before the pandemic. The youth culture has been teeming with creativity and has all but boiled over in the past few years through social media platforms like TikTok and YouTube. In fact, some of the biggest names on the TikTok platform collaborated with the documentary series including Chase Hudson (aka LilHuddy), Neon Eubanks, Curtis Roach, and Anthony Reeves. It goes without saying, Slimane has really struck a nerve of our contemporary cultural moment with this collection.

Also for the “The Dancing Kid” collection Slimane invited a number of notable contemporary artists to collaborate on designs. It is imagined as a group show including: Tyson Reeder, Jesse Harris, Gregory Edwards, Ryan Ford, Amy Sillman, Turpentine.

The soundtrack is performed by Canadian rapper Tiago Garcia-Arenas, also known as Tiagz, who Slimane also photographed, below.

Explore the full collection through video and images, courtesy of Celine.

HRVY reflects on his new album ‘Can Anybody Hear Me?’