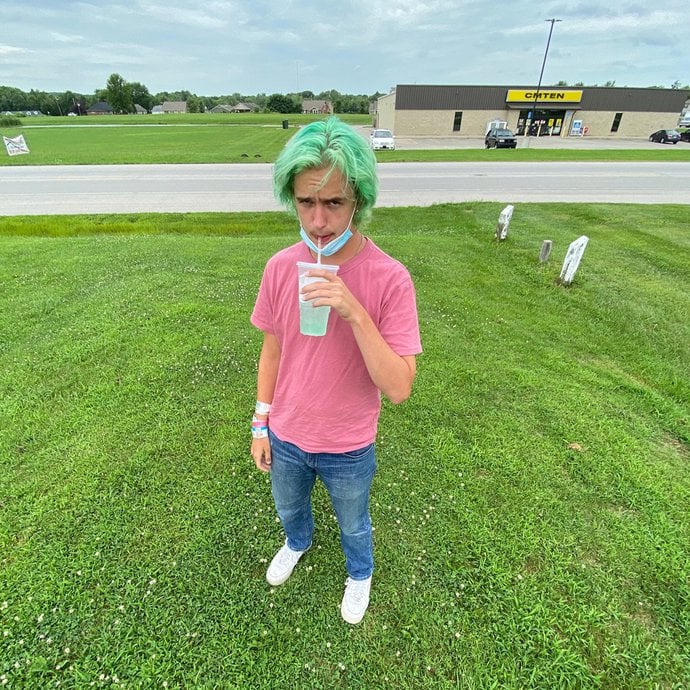 CMTEN (pronounced see-em-ten) can be an enigma for those who don’t know his wildly popular song “NEVER MET!” that went viral on TikTok. The highly layered and stylized song takes the listener through a somber diatribe of post-break up feels against a sped up glitchy backdrop. If you weren’t listening carefully you might just miss the heartfelt lyrics that could have easily been written for a pop singer.

It wasn’t, though. It was written to an intense glitch track of CMTEN’s own making which has colloquially become known as glitchcore. “NEVER MET!” became an instantly relatable song to an entire generation that interacts nearly entirely through hazy online interactions. We caught up with CMTEN to talk all things music, TikTok, and his unexpected rise on the app.

Mark Benjamin: How did you get into music and how did glitchcore come about? I couldn’t figure out if the meme came first or the music.

CMTEN: I have been singing my whole life. I grew up doing choir for church and all of high school I was in choir. That started me off vocally and gave me a foundation with music theory. I also took piano lessons when I was in elementary school and I used to do guitar as well. But I didn’t start producing my own music until late 2017 or early 2018.

MB: Was that on your computer, kind of playing around at first?

CMTEN: Yes, at the end of 2017, I downloaded Ableton randomly on my school’s Windows computer, and started messing around with that. Then for Christmas 2017, I got a mini keyboard and then going into 2018 is when I started actually trying to work on my music.

MB: Were you on TikTok or Musicly back then?

MB: I think a lot of people downloaded it as a joke, right?

CMTEN: Yeah. Oh, a hundred percent. There’s a lot of people that say this, but it’s really true. It was a joke app you downloaded and then you kind of get addicted to it. Then it’s like, ‘Oh, I’m not going to tell my friends. It’s kind of embarrassing that I have the app, but I think we’ve progressed past that.

“I’d say part of it is that I have really bad A.D.D. It sounds like it can be a curse, but it also helps because my music sounds the way it does”

MB: Were you making music to memes or just putting your music out there and hoping people would use it?

CMTEN: Honestly in 2018, I wasn’t even thinking about using TikTok as a platform. I was making funny videos and the music that I was releasing in 2018 was more like, ‘None is going to listen to this.’ I didn’t really want anybody to listen to it. And yet I’m like uploading it.

Eventually, I started to tell more people about it and my friends would say, ‘Oh, this is pretty cool.’ So, I gradually shifted towards a mindset of, ‘Okay, maybe I do want people to listen to this.’

MB: Two of the genres glitchcore is closest to is Vaporwave and WitchHouse. Pictureplane and George Clanton are credited with forming those sounds. Do you listen to that music of or is that relevant?

MB: Who are some artists that you always go back to?

CMTEN: Definitely. I’d say one of them is osquinn. I think she’s 15 or 16 years old, but she’s pretty much making a future in music right now. On the Spotify Wrap thing that just came out osquinn was like my top artist for the year. The music is insane. I’m trying to think of who else…Two Door Cinema Club. That was definitely a big one. And especially the instrumentation, those songs, like the percussion…I’d say also bedroom pop artists such as Clairo and then there’s hyper pop artists, like 100 Gecs. Even music like Skrillex. It’s basically everything all across the board.

MB: That’s something I wonder, too, is how many layers are you looking at when you’re editing a song and putting it together?

CMTEN: When I’m fully done with a song on average, I have twenty or so layers. Sometimes it’s more, sometimes it’s way simpler, usually to get the harmonies in or different kicks of stuff.

CMTEN: I’d say part of it is that I have really bad A.D.D. It sounds like it can be a curse, but it also helps because my music sounds the way it does, but I’ll bounce between ideas and not even think about it. Sometimes I’ll think, ‘Oh, I just made a bunch of different instruments and all these different parts sound different.’ I’m barely even thinking about it when I do it. Then I look at it later and I’m like, ‘I’ve no idea how that happened.’

MB: Where do you see the future of your music going? Do you think you’ll end up doing a lot of collabs or a full cohesive album?

CMTEN: I think for now I’m going to work on getting a couple of singles out so people can look forward to that. I don’t really know what’s going to happen after that, but at some point I would love to put out a project.