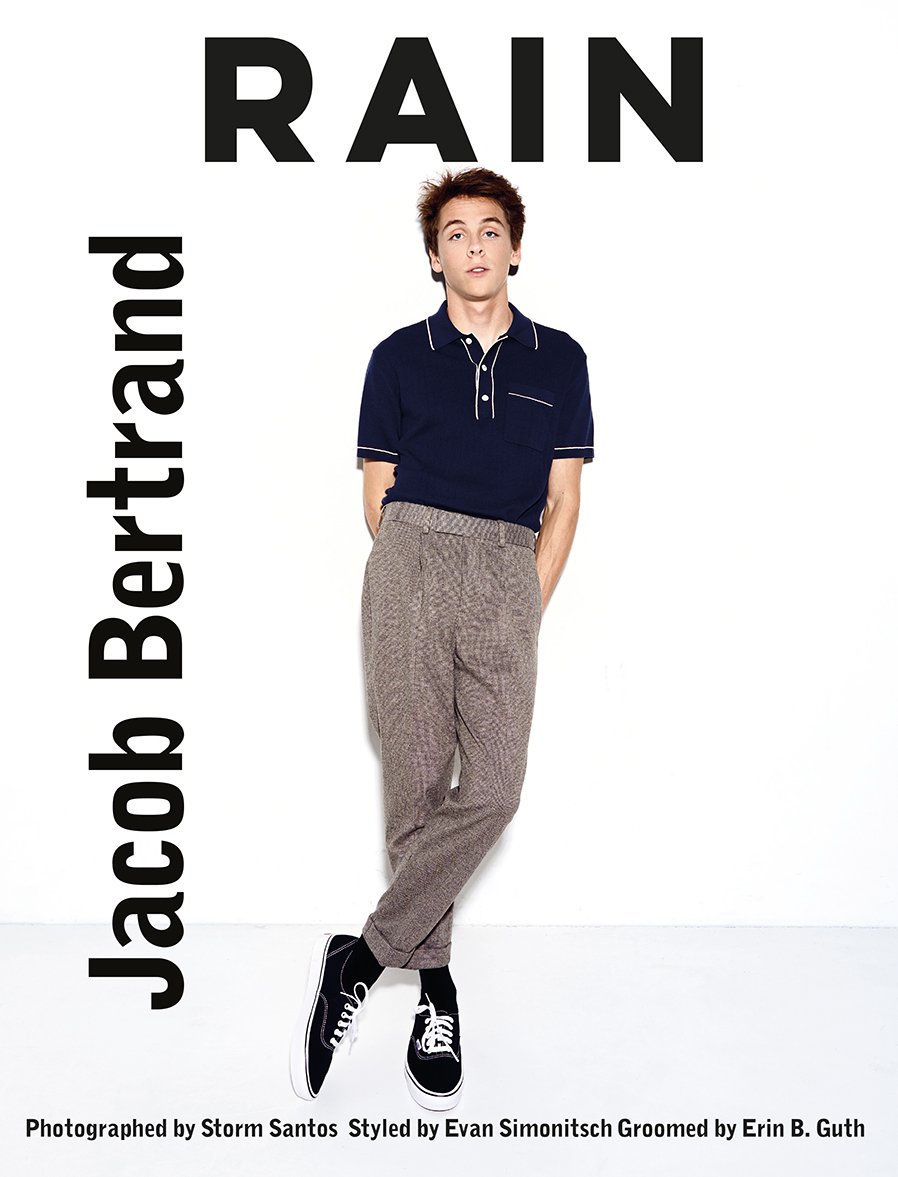 Jacob Bertrand has quickly become known for his role as Hawk on the popular Netflix series Cobra Kai. The drama packed show has plenty of twists and turns for all audiences. The show covers contemporary problems – the good and the bad – through the lens of karate and community. The show’s popularity continues with a new season, Season 3, that released last month on Netflix. We caught up with Bertrand to talk about the show, karate, and his passion for rock climbing in an exclusive cover feature interview with RAIN magazine.

Mark Benjamin: Hey Jacob, thanks for chatting with us today. I saw on your Instagram that you were at Joshua Tree Park, literally a week after I was there in November.

Jacob Bertrand: Oh, no way. For how long?

MB: Like a week. We were trying to decide whether we should go see the Sequoia trees or go to Joshua Tree Park and everyone encouraged us to go to Joshua Tree. It was incredible. There was a giant mountain I think they call the trail up it: a cheap way to die. So, of course we just start climbing the side of the mountain. I chickened out before we got to the top though.

JB: That is freaking hilarious. I think I know that spot you’re talking about, and I’m very impressed that you did that!

MB: We were a little worried about stepping on snakes out there which brings me to Cobra Kai.

JB: I play Eli Moskowitz also known as Hawk. He goes from this kid who was bullied for a long time. He’s someone who was really shy and insecure before joining the karate team, Cobra Kai. Then he kind of branches out, puffs his chest out, bears all his insecurities and becomes this super badass guy.

I think Hawk kind of gets easily manipulated by Kreese once he comes into the dojo. Hawk really buys into Kreese’s ideology and his super hardcore version of no mercy. And in season three, without spoiling too much, Hawk is caught in between Kreese’s Cobra Kai and all of these people that are coming back into the dojo that he doesn’t really like, and so he’s kind of deciding is this really for him? Where does he stand in the midst of all of this?

MB: He sounds like more complicated than somebody who is billed as evil or the bad guy.

JB: That’s what I love about this show in general. A lot of characters, mine specifically, is a total gray area. There’s not really any moment where you’re like, ‘dude, this kid’s just bad.’

You really get to understand why they make the choices they do. And even though you can admit and concede that this probably isn’t the best decision, you at least know why and where they’re coming from, which I really love. I think it’s great writing.

MB: Are you a villain by nature? Was it difficult to start to play the bad guy?

JB: Oh, I love playing the bad guy. I absolutely love it. It’s a lot of fun. It’s nice to go back to the good side and be a good guy for a little while though.

MB: One of the themes consistent throughout the series is violence, right? You watch how it ruins people’s lives and changes the environment. People getting hurt or extra security at school, for example. I was curious what your thoughts were on how the violence has gotten out of control in series? What are the lessons from that?

JB: Yeah, I think a great example of violence getting out of control is in season two at the very end when Miguel decides to show mercy. Like, ‘Yes, we’ve been fighting. We have all these problems, but I’m really going to try to navigate this in a different way.’ He does that successfully. He’s the bigger man in that moment and Robby just goes overboard and kicks him off a frickin’ balcony!

I think it’s easier to resort to that than not, especially for someone like Hawk who has so much pent up aggression from years and years of being ridiculed. I think the violence occurs more as Cobra Kai increases pushing the super violent agenda: strike first, strike hard, no mercy, ideology. Whereas, Miguel is way more about self-defense and protecting the people he loves.

MB: It kind of reminds me of Mighty Ducks.

JB: Oh, yeah, of course. It definitely carries that vibe a little bit with camaraderie and competition, but then like when things start to spiral, that violence is definitely possible.

MB: Both seem very painful, a broken arm or a puck to the face…

MB: It sounds like you had a lot of training for this role. I read you were in karate when you were younger, so maybe the training wheels were already there?

JB: I did karate probably seven to twelve years old and I honestly don’t remember much, but I think it did give me a good enough base where I didn’t have too much trouble hopping back into it. It’s still very foreign and really hard to get my kicks down and be flexible enough to kick someone in the head. We did a lot of stretching for that. Eventually, I could get my foot up there and knock someone out with a kick to the face.

“That’s what I love about this show in general. A lot of characters, mine specifically, is a total gray area. There’s not really any moment where you’re like, ‘dude, this kid’s just bad.'”

JB: I think karate is something great for a lot of kids at a young age. I think the show has shown both sides of the coin where karate can be violent and bad under Kreese, but also disciplined and a force for good.

MB: I wanted to talk to you about your career. You’re a young actor that has worked on quite a number of different projects already. I was wondering what is it you look for in new roles and what are some of the ways that you challenge yourself working on new projects?

JB: I’m always open to and looking for roles that are different than the ones I’ve done. I would love to play another villain or a fallen hero type of guy. I’m always looking for something different.

I really like doing things that have a lot of range and this was the first role that I really got to show range in. I’m stoked for the future and being on Netflix has definitely opened up a lot of doors. I can’t wait to see what comes next.

MB: This series in particular has had tremendous success.

JB: It was first on YouTube and did really well there, and when it came to Netflix I think everyone thought it was going to do well, but I don’t know if anyone thought it would blow up the way it did. So, I’m beyond grateful to be a part of the Cobra Kai universe.

MB: How is the chemistry with the rest of the cast?

JB: Oh, it’s great. Me and Xolo are like brothers. He lived super close to me in L.A., so we hang out all the time. Johnny came over before quarentine. We’re all hanging out all the time…Tanner, Mary, Peyton. It is honestly a blast. I love filming with everybody. It’s awesome.

MB: You mentioned you also do rock climbing?

MB: Do you free climb, no hands? I have no idea what I’m talking about.

JB: So, I mostly do bouldering, which is you’ll just see a really big boulder and it’s probably anywhere from three to five moves. It’s very dynamic and quick. You’re not climbing super high, it’s usually like 10 feet, 12 feet max. I just started getting into sport climbing. There’s multiple different little walls. You have to climb and clip yourself in.

MB: Is it like a gateway drug for free climbing?

JB: My mom was very worried that I was starting to get into that. She’s already worried, but I’m safe. Don’t worry.

MB: I watched that documentary of the climbers on the cliff face of Yosemite.

JB: Oh, yeah, you see these climbers sleeping on the side of a mountain. Like what? How can you sleep? How are you doing that?

MB: They climb out of their suspended tents like, ‘Oh, it’s still raining. Guess we’re not climbing today.’

JB: Yeah. That’s that seems a little intense for me. I don’t know if I’ll ever get there, but you know, we’ll see, I’ll call you when the documentary comes out!