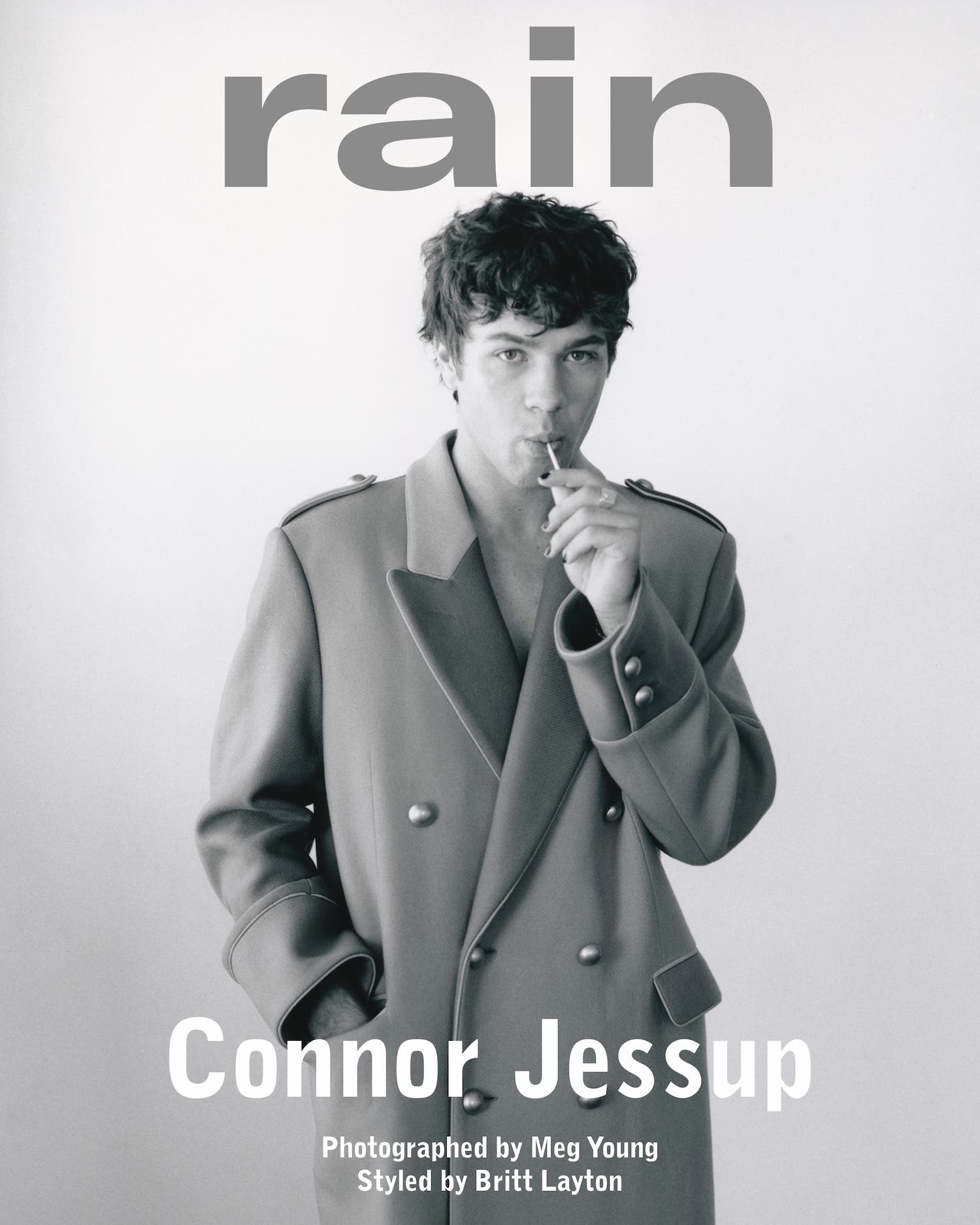 Connor Jessup is not easily categorized. The thriving young actor stars in the third and final season of the popular Netflix series Locke & Key. He also created a documentary on the life of the influential artist and filmmaker Apichatpong Weerasethakul, an endless source of inspiration for Jessup. Multi-faceted and ever-curious, Jessup has directed several short films alongside his acting career. He spends much of his free time writing and directing when he’s not acting.

Connor has also become a visible figure in Hollywood for the LGBTQIA+ community. On his 25th birthday, Jessup came out publicly as gay on Instagram. While he had been out for some time in his personal life, Jessup decided it was essential to be out professionally, too. In this exclusive interview and photoshoot, Jessup reflects on his time on Locke & Key, his influences, and his outlook on creativity and identity.

We’re going into the third and last season of your popular show, Locke & Key. It’s been a big part of your life. Can you tell us about the journey?

TV is unique in that it does become such a big part of your life for an extended period. It’s almost four years since the show entered my life. My experience making the show was one of the warmest, most positive experiences I’ve ever had! Last week, I saw everyone in LA; we had this goodbye slash reunion party. They are some of my favorite people.

Long after I forget the day-to-day of the show or even what the show was about, I will remember them. The cast and crew will still be part of my life. I’m grateful for that. It’s also a good fortune to be on a show with an ending planned. We went into the season knowing it was the end, not just for the story but also for us. As people and locations wrapped, we were able to say goodbye, and it felt like a very rounded experience, which is lovely.

You have had numerous roles: an actor in front of the camera and a director behind the camera. How do those various aspects of storytelling help one another?

I used to have an image of how I like to spend my time. There was almost a competitive image; it almost felt like the different roles were robbing each other. In the last few years, I think I’ve realized you can’t do everything at once. There’s only so much time, but they all tap into the same place and enrich every good experience. The things that I make myself are things I would never get to do unless I was getting to wear multiple hats. It’s a way of expanding the possibilities of how you spend your time which is exciting!

Almost all of my friends, the people I care about, and those who’ve helped me make my movies are people I’ve met through acting. Whether they’re actors or directors or production designers or set decorators or sound mixers, everyone cares; everyone is in it because they want to make things that make them proud. It takes so many people, a hundred people with different skills working together to create something that feels like a singular thing. Getting to see that from as many different angles as possible is thrilling.

You remind me of another Canadian filmmaker and actor, Xavier Dolan. Do you find his work inspiring?

Yeah, he’s a friend of mine. I love Xavier. He has had one of the most astonishing careers. He is a great actor and made his first film when he was 19. I think his film showed at Cannes when he was 20. He made a movie every year after. He is a nonstop volcano of productivity and feeling.

He is also an inspiration for young filmmakers coming up in Canada because, rightly or wrongly, there was an image of what it meant to be a Canadian filmmaker and the types of movies made. He shattered that. He did his own thing but exactly how he wanted to and got recognized for it on the international stage. You meet people who are passionate fans and followers and people who are passionately against the work. That’s very un-Canadian to have that level of enthusiasm in every direction for someone. So, I think Xavier is healthy for the country’s culture.

I was thrilled to hear about your documentary on Apichatpong Weerasethakul, who has also been hugely inspirational to this magazine.

I love Apichatpong. He’s a great hero. When I was like 19 or 20, I made a movie. I sent it to him; he wrote back and was generous and supportive. We kept bumping into each other in different places. So, I made this documentary about him for The Criterion Collection and spent a proper amount of time with him researching the movie.

I was filming during what became Memoria, his current film. He has significantly affected my life because his films changed how I watched movies when I found them as a teenager. He is a profoundly inspiring artist. He is someone who trusts his curiosity more than anything. And it’s the movies he makes as a result that he follows to its conclusion and gets the film as opposed to working backward. I’ve realized how rare that is.

What are some of your current projects that are exciting to you?

We finished Locke and Key which we shot for a year because we filmed seasons two and three back-to-back. That was the longest stretch of shooting that I’d ever done. I was a little tired, so I’ve been traveling, catching up with friends, and writing. Between the show and the pandemic, I realized that much of my life had slipped away. It was important to pull back some. I’ve spent most of my time trying to be a person again.

Yeah, to be present.

It’s tough. Maybe it’s because of social media addiction and its endless pleasure. When you’re working, it feels like time has stopped. There’s a pause put on life. I’m glad to be out of that time loop for a moment.

A part of the community

You’ve become an LGBTQIA+ figure and influential person that people admire. It happened over a brief period. I wanted to discuss that and the importance of representation in Hollywood and beyond.

I came out to my family and friends in my life many years ago; I felt like that was enough. That felt like such a big hill to climb. Many queer people understand that feeling; it’s this release, this tension. As the years passed, I realized I wasn’t out in professional life after coming out. It felt like I didn’t owe it to anyone. Why would people care anyway?

I figured it was not necessary as an actor, but I realized that it was becoming something I was avoiding, in a way, passively, but avoiding. I couldn’t figure out why. I tell myself I’m not ashamed of it, so why am I answering this question differently than I would if I was out, or why am I sitting a certain way in this audition when I would typically sit this way?

If you asked me when I was 20 how important being queer was to who I was or my identity, I probably would’ve said something like, ‘oh, I’m proud to be gay, but it’s a small part of who I am.’ A lot of what I value, the art I like, the people I’m drawn to, and the things important to me because I’m gay and a part of the community.

It feels like a massive wave of creatives is speaking their truth. It’s inspiring.

It makes me happy. I came from the most accessible background you could come from being gay. It’s urban, and my parents are very liberal and accepting. It was clear to me and my brother our entire lives that we could love whoever we wanted to love, and it was still hard for me in that enormously supportive context.

I’ve gotten so many messages from people who have been in situations: places, families, whatever, that are much more antagonistic and difficult. The scope and depth of queer experiences around the world are vast. I had no concept of it being 18 living here. It is about engaging with the broader community online that has taught me a lot. I feel grateful to be part of that community because it is a rich and beautiful world!

I feel everyone’s queer, and it’s how it should be. I’ve had no negative repercussions in my life or career since coming out. I don’t think I could have said that ten years ago; I definitely couldn’t have said that 20 or 30 years ago.

I meet kids, sometimes friends of cousins or fans, people who are out when they’re 12 or 13 or 14 who are exploring gender fluidity. It was unthinkable even when I was in middle school or high school. That gives me a lot of hope. I’m also excited to see the art that this next generation of queer people makes. That will be thrilling.

Majorlilkween goes ‘Rogue’ for the cover of Rain magazine