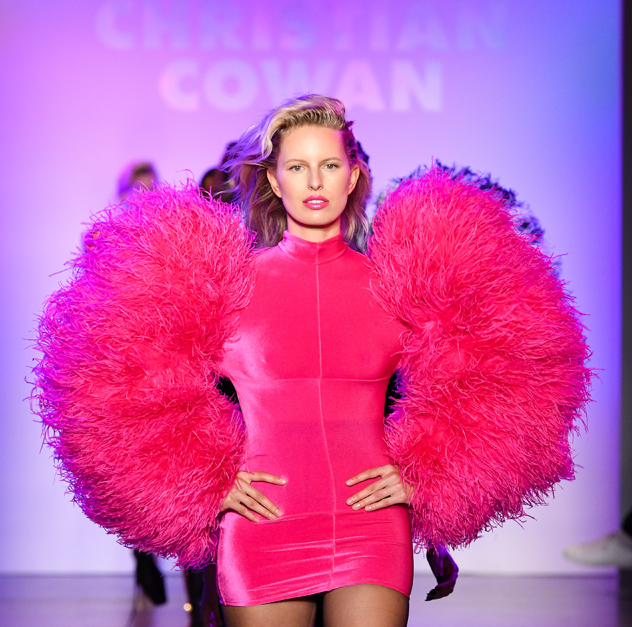 “Give them the old razzle dazzle, razzle dazzle them,” Richard Geere famously sang in the hit musical Chicago. We can’t help but sing along in our head as Christian Cowen presented the Spring/Summer 2020 collection in New York.

We can see why the 24-year old designer is royalty among celebrities like Katy Perry, Beyoncé, Kylie Jenner, and perhaps most notably, Cardi B. Cowan famously designed the infamous black and white checkered print that Cardi wore on the cover art of her debut studio album, Invasion of Privacy. A similar pattern appears throughout this show as well.

The greatest inspiration for this collection seems to be, well, instagram. In recent years, something of an instagram aesthetic has emerged among influencers and the influenced. Difficult to put into words, it’s a sort of hybrid between exaggerated sportswear and flashy you-can’t-miss-me statement pieces. Two genres Cowan dominates.

With ever shortening attention spans and never ending scrolls of content albeit social, entertainment or otherwise, a great need has arisen for clothes that stand out. A maximalists’ revenge, Cowan’s designs are on the pulse of what people and pop stars want. Extravagant, eye-catching, and a big one for this new era of social media…drumroll…relatability.

A hoodie dipped in sequins, checkerboard on everything, and iridescent dresses are just a few notable examples. Also, Cameron Dallas in vinyl pants with a see through. This is one of the most instagram inspired shows we’ve witnessed. “I just want to make people feel good,” the designer once told FashionWeekOnline. He certainly knows his audience and delivered a very feel-good collection.