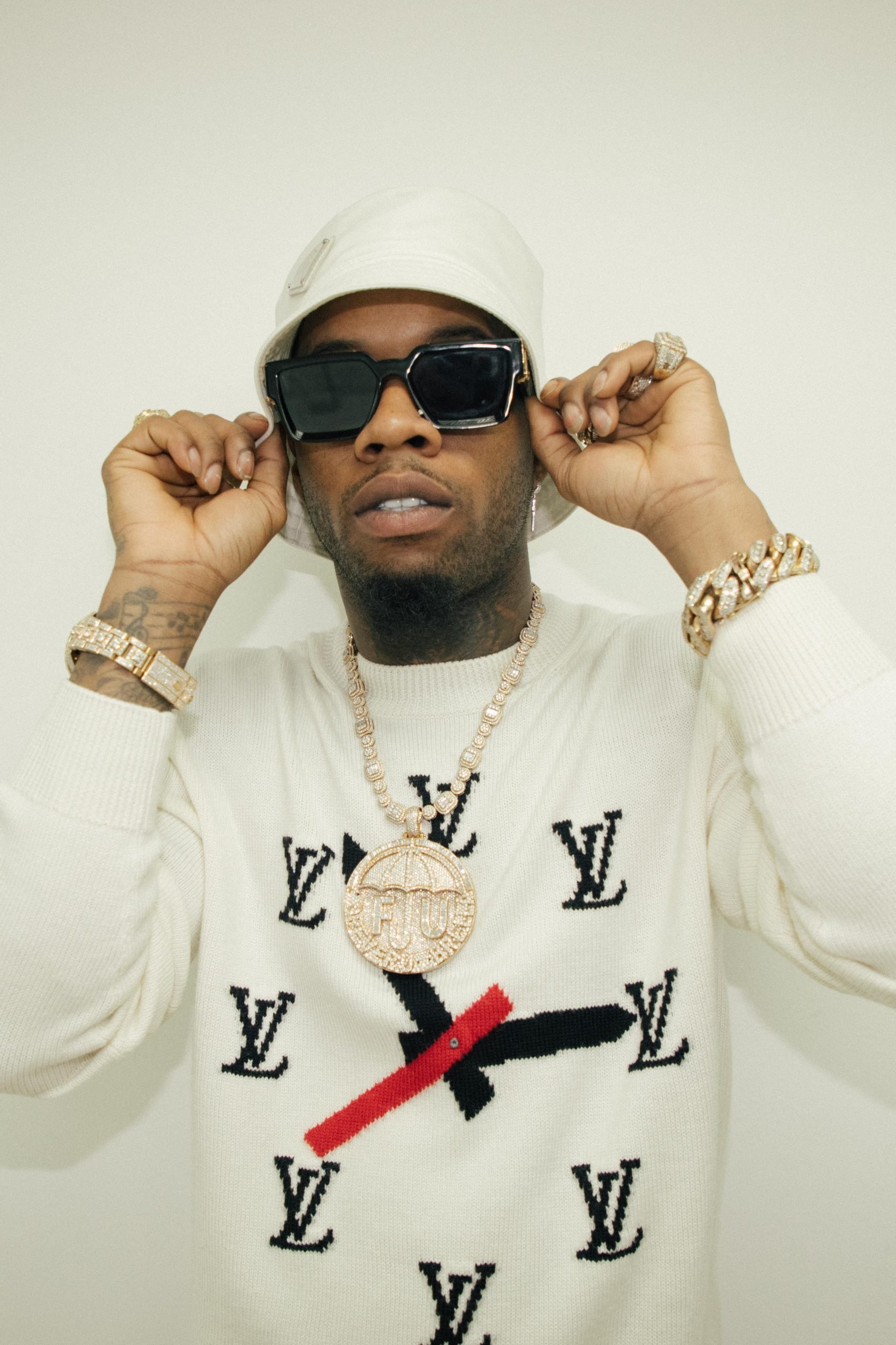 Tory Lanez at just twenty-eight years old found himself at the top of the rap game. Coming up from an eclectic discography that covered everything from rap to R&B and even into experimental electronic with the album, Cruel Intentions, Lanez has influenced genres in a myriad of ways. In fact, it’s not all that surprising given his name, Tory, is taken from one of the most influential rap artists of all time, Notorious B.I.G., who Lanez has long admired.

Despite what may be playing out in the media and in legal proceedings, Lanez stays focused on what is most important to him: the music. His latest release, Playboy, is a testament to what a lifetime in music and songwriting can achieve. The soulful and melodic twelve songs on the album are a calming contrast to the high octane tracks of The New Toronto 3 and Loner released last year. Those latter albums took Lanez to new heights. The song “Broke in a Minute” became an overnight sensation hitting nearly 150 million streams, one of Tory’s highest streaming hits to date. It’s hard not to acknowledge how prolific Lanez actually is, having released five studio albums, two EPs, and countless mixtapes and features.

One interesting highlight is the unforgettable banger from last year, “WHATS POPPIN” by Jack Harlow featuring Lil Wayne, who Lanez has long admired, and DaBaby. In what may be the biggest crossover rap/pop hit in recent times, the cheeky track took off and now has over 359 million streams at the time of writing. Last year, Lanez had a single feature with Tyga, who we previously featured, also take off, “Still Be Friends (feat. Tory Lanez)” which now boasts over 174 million streams. In the rap game, as it always has been, artists write and rap about their lives. Their art, in a sense, is their life, and it isn’t long before you realize those lines often blur. We caught up with Tory from his home in Miami in an exclusive interview with RAIN about his life’s work, creative process, and his latest release, Playboy.

Mark Benjamin: Yesterday was the 24th anniversary of Notorious B.I.G.’s passing. How has his influence worked its way into your life and music?

Tory Lanez: I’ve always looked up to his career. He was able to put out so much music in a small amount of time. I’ve always admired Notorious B.I.G. ‘I would like to have something like that, a legacy like that.’

MB: I grew up listening to a lot of third coast rappers like Z-ro and DJ screw. Rap has changed so much since then. How have you seen the genre change over your career?

TL: Well, there was a time where you would wear baggy pants and an oversized jersey, but you know, things move on, things change. The internet has allowed us to be discoverable in our own right. A lot of things have changed digitally and the amount of exposure that an artist has coming up and all the data they have now, too, has changed.

You have to draw people in to think in terms of the digital process now. It’s a bigger wave of kids…the fans and consumers that are watching and listening to your stuff, they gotta be drawn in differently now.

“It’s a matter of everybody doing things that don’t make them comfortable. That’s how you get innovation. You never go into something brand new if you feel comfortable with it.”

MB: What are some of those ways that you draw in a listener?

TL: Personally, I feel like I’m my own kind of marketing genius. I always kind of make everything larger than life. If I’m dropping a song, I’ll make the song feel like it’s larger than life, because that’s how I feel about it. I’m going to do my best to make sure that when I talk about it, I talk about it in a light that makes you curious, that makes you want to look into it further. Anytime I’m putting something out, I always try to make it more cinematic than anything else that’s out there.

MB: I read in a previous interview you gave on how autotune, repetitiveness, and the lack of innovation is hurting rap. In a Prince interview I recently watched, he said, ‘pretty soon we’re going to be sampling the sample.’ Of course, we’ve long since gone beyond that. What do you think will take rap to a new place?

TL: I think it’s a matter of everybody doing things that don’t make them comfortable. That’s how you get innovation. You never go into something brand new if you feel comfortable with it. You never get to something brand new unless you feel uncomfortable. I feel like a lot of artists have to take themselves out of a place of what they normally do and put themselves in a place where it’s something that that they don’t do. I think that that will change the spectrum of innovative music.

MB: I know personal relationships play a huge part in any music career. How was it like navigating the industry in your early career?

TL: I never look at myself as more prominent now versus then. I feel like I’m always treating my latest song like I treated my first. So, when it comes down to getting my music out there, it’s the same feeling then as I feel now. Nothing has changed. Even though I may have a fan base now, it always feels like I’m having to prove myself. Even when I’m doing my best, I still feel I have to communicate that I’m a force to be reckoned with.

MB: I read you had a difficult life growing up. A musician that I recently interviewed explained how he felt all art comes from pain. So, I want to turn around and ask you that question. Do you find that to be true?

MB: I think a lot of people don’t like to talk about it because it makes them feel vulnerable.

TL: It’s not easy to be vulnerable. You have to be very honest. Not a lot of people are very honest with themselves.

MB: I want to ask you about an early EP you did that’s different from the rest of your discography, Cruel Intentions. It was pretty experimental. You did it with Shlomo and RL Grime. What was it like working with them and putting this together?

TL: At that time in my life, I was getting signed to the label, but Schlomo and RL are still brothers of mine. Those are friends of mine that turned into family. We always talk and laugh about that time because it was such an incredible time in all of our lives. I think we were all pivoting to a place where we didn’t know what was going to happen. The goals that we all reached in such a short amount of time were incredible for all of us. That EP is something that we put together with all of our creative thoughts. It was short and sweet and to the point and people really reacted to it.

MB: Where does a song start for you? Is it a feeling or a thought or an emotion? What’s the fastest you’ve made a song?

TL: Everything’s off of a vibe in the moment. The fastest I’ve made a song is three or four minutes.

MB: I can tell songwriting and words are important to you. I can see that very clearly in Daystar where you have a poem in the album. So, I wonder what is it that you ultimately want your listeners to walk away from?

TL: I want them to feel like they know the real me. Like I gave them everything that I could to give them clarity on who I am as a person, where my morals lie, and the person that I am. I try to paint a vivid picture with everything I do. I want people to listen to my music and envision that same picture that I’m painting.

MB: You just released this R&B album, Playboy, for your fans. What is the album about for you?

TL: Well, I just got over a break up and this was one of the first albums I wrote. I was able to actually talk about this from the perspective where I could lean into how somebody feels, or the person on the other side. I feel like that gave my fans more insight into a real breakup through a heartfelt album.

MB: I want to ask you about “WHATS POPPIN” because that was a huge moment for music. It was a crossover pop/rap hit. I listened to that song a devastating amount of times. It’s catchy and fun. I was curious what it was like putting it together with Wayne and Jack and DaBaby?

TL: I wanted to make sure my verse was memorable. I remember I wanted to show the words that I could spit. You know, I started rapping before I started singing. So, the art of rap is a very important thing to me. Wayne is one of my favorite rappers and I felt being on a record with him, it was important for me to get it right. So, I did what I did and jumped on. The records were hot and the verses…everybody’s verse was hot. I felt like we all had a good balance.

MB: You have a record label, One Umbrella where you’ve signed artists like Mariah the Scientist, who we have featured. I saw you did a shout out to an emerging musician, Shay Dee, too. What do you look for when you sign artists?

TL: Mariah is an incredible artist, as are all the other artists on the label. I think I just look for innovation, for something that another artist is not going to have. I want people that I sign to have the same work ethic as me. Artists that are constantly trying to outdo themselves and be better.

MB: Do you become a soundboard or often given advice on how artists can navigate their music career?

TL: I’m very hands-on with everything. I shoot a lot of the videos and do a lot of the editing, as well. I’ve been on both sides: when you’re the hated artist, or when you’re the loved artist. I think all the artists that I’ve signed so far to One Umbrella are in a great place, moving forward and moving upwards.

Briston Maroney releases ‘Sunflower,’ an album years in the making