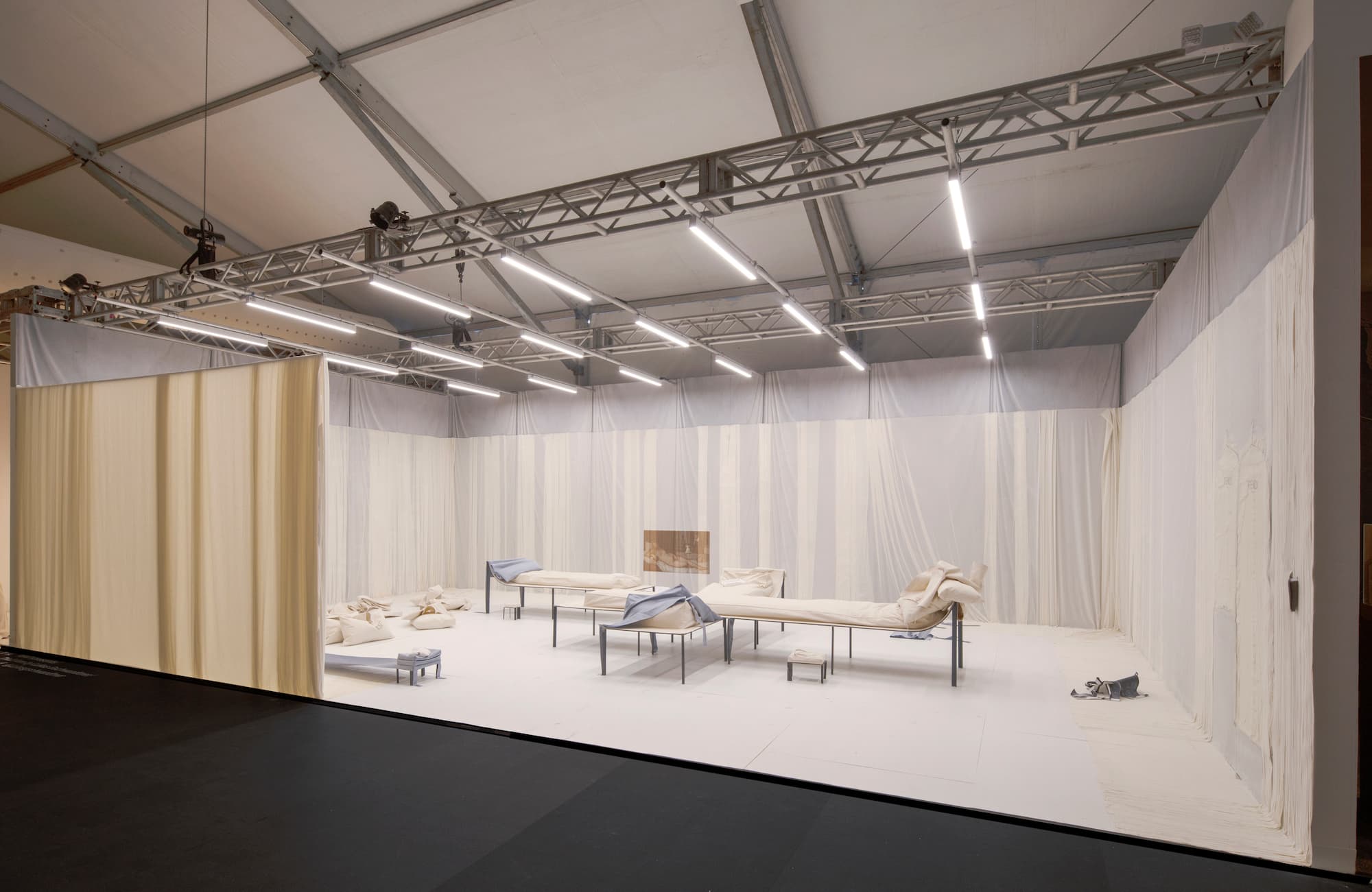 This year, FENDI has invited Vienna-based artist Lukas Gschwandtner to make a new body of work at Miami Art Basel. Seen by Gschwandtner as an opportunity to engage with one another’s boundaries and experiences, he has proposed a triclinium formation of chaise longue chairs and an iteration of his case study series Pillow Portraits.

The series, which consists of wearable canvas sculptures referencing historical portraits of women reclining on furniture, is now infused by Gschwandtner’s interest and attachment to the history of ancient Rome, ‘The Eternal City’ where FENDI was founded, its art and its architecture as translated through mediated imagery.

The work of Lukas Gschwandtner engages with the scale and measurement of the human body and its interaction with space, furniture, and objects in both historical and contemporary contexts. He investigates the body language that a piece of furniture suggests and how this proposal is interrupted and repurposed by its use.

Through his recent research, Gschwandtner found a personal connection between FENDI’s historical relationship to leather manufacturing and his background in leather craftsmanship in Vienna, where he trained in leather accessories from 14 at Schloss Hetzendorf. He further identified a material relevance in the atelier’s use of Calico, the heavy, plain-woven textile made from unbleached cotton. Commonly used within the fashion industry for toiles — the first version of a garment made to test a pattern — it had also already been established within Gschwandtner’s practice as a key motif, allowing him to concentrate on pure form.

In this body of work, the canvas is seen as an undergarment and additional textile layers as ‘dresses’, their material relationship allowing him to play with proportion and visual weight. When worn, the Pillow Portraits direct the wearer’s body to take on the posture of a corresponding artwork, such as Antonio Canova’s Pauline Bonaparte as Venus Victrix, Titian’s Venus of Urbino and Sleeping Ariadne, the reclining Roman Hadrianic sculpture also evoked in the Giorgio de Chirico painting “Solitude”, where she is against a backdrop of arches reminiscent of FENDI headquarters at Palazzo della Civiltà Italiana. Because his canvas sculptures extract simplified forms from the paintings and artworks, their historical, class, and gender context is abstracted, creating room for personal interpretations and democratized experiences.

In Triclinium, Gschwandtner creates a subconscious and physical space for conversation, in dialogue with the work, oneself, and others. He reflects on how museums are more often experienced and how ancient surfaces are read in relation to a contemporary inclination for documentation and dissemination.

The final piece presented at Design Miami/ is Lukas’ interpretation of FENDI’s iconic Peekaboo handbag, for which he filled each compartment of the bag with plaster before cutting away the original material to reveal the bag’s inner construction imprinted on the cast.

The work of Lukas Gschwandtner (°1995 / AT) engages with the scale and measurement of the human body and its interaction with architecture, furniture and objects in both historical and contemporary context. He investigates the body language that a piece of furniture and society suggests and how this proposal is interpreted and repurposed by its use. He was trained in leather accessories at the age of 14 at Schloss Hetzendorf, where he first got introduced to creating objects by applying craftsmanship and creating patterns that allow to go from two dimensional into three dimensional by studying construction techniques, which became an important aspect of his work process. This education was followed by his studies in London, a combination of architecture and fine arts made at Chelsea College. There he was able to experiment with the scale of his work.

In 2018, he received a grant from the Arts and Architecture Division of the Federal Chancellery of Austria for Wiener Maße, a traveling steel, plaster, and canvas construction, which focuses on the shared word in conversation and the resulting perception of time. The installation was tested at Raven Row and RIBA in London. This was followed by a solo show at Lant Street, curated by Jermaine Gallacher. Lukas participated in Peana’s 2019 residency exchange program in Monterrey, Mexico, funded by the Rockefeller Brothers Fund.

In 2021 Lukas had a solo show Pillow Portraits with Maniera in Brussels which was the starting point for the ongoing case study series and wearable canvas sculptures of historical women being portrayed on certain furniture pieces.