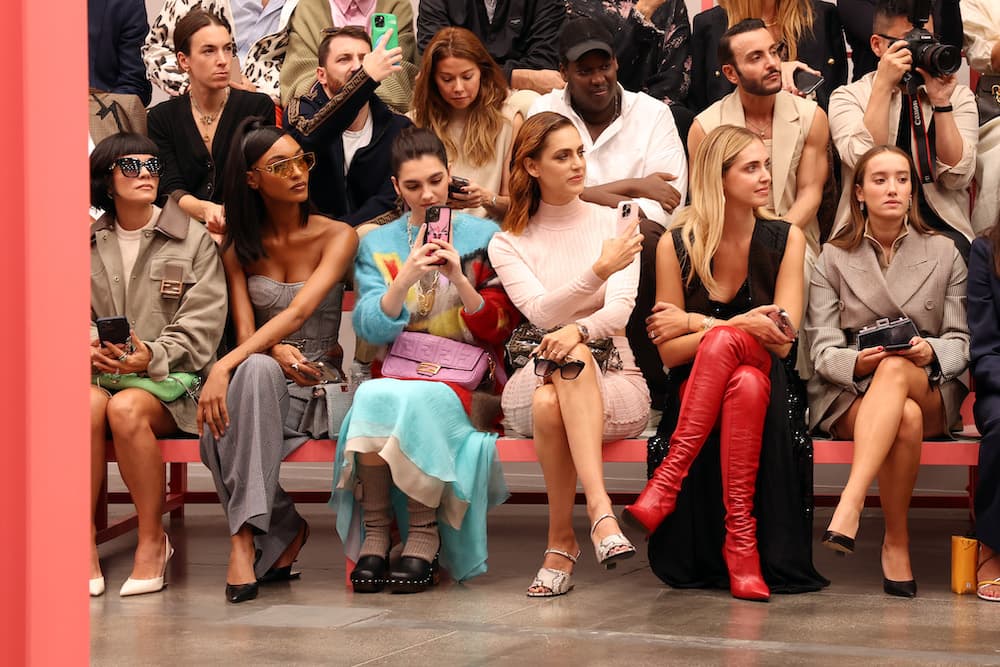 “What is particularly interesting to me about FENDI is exploring the notion of functional utility alongside femininity – because the Fendi women are strong women with full, busy lives.”

Looking back to Karl

For FENDI Spring/Summer 2023, Kim Jones develops the codes he has established during his tenure at the brand while drawing upon FENDI’s history and evolving its distinct language for now. Through his fresh perspective, the past becomes the future: Karl Lagerfeld’s work, from 1996 to 2002, offers the starting point for a collection that appears distinctly contemporary. “It’s about continuity,” says Jones. “I am interested in looking at things that Karl has done, and seeing how we can develop them – both visually and technically.” A floral print drawn from the FENDI archives and a logo first introduced in 2000 anchor the collection in the past, but are reimagined for today.

The clothing loosely revolves around the turn of the millennium – in its collision between minimalist ease and pop-infused eclecticism. Floating layers of technical organza, or nylon jersey embellished with lacquered embroidery, offer a new dimension to ethereality: at once sporty and delicate, effortless yet refined. Slouching cuts and elongated racerback silhouettes are imbued with insouciance; an obi belt continued from the Autumn/Winter 2022 FENDI Couture collection, is integrated into tailoring to elevate its form and offer feminine structure.

A harmonious palette of neutrals is interrupted by bold pops of color: vibrant pink, cornflower blue, and vivid green appear boldly saturated. Organic textures – cashmere and fur, shearling and leather – materialize through FENDI’s unparalleled savoir-faire, now lighter than ever before, and appear layered with technical fabrics. Sleek satin is hybridized with mesh, and grounded by elevated tennis shoes or rubber platforms: the inverted “F” of the FENDI First appears as an illusory cantilever across footwear, in tribute to the house’s instinctive alignment of form and function.

“At FENDI, I am constantly thinking about practicality as well as luxury,” says Jones. “Adding heavy hardware to something very soft both gives it real functionality and makes it interesting.” In jewelry, “we are working with the rigid and the soft,” notes Delfina Delettrez Fendi. “The logo almost disappears into functional architecture suspending each stone.”Throughout accessories, this sentiment shines: a Peekaboo, now sliced in half to reveal its mechanisms, becomes one of the season’s key accessories; elsewhere a steel F falls through the body of a bag to become its handle.

The house’s iconic bags are realized with the same spirit of duality which permeates the collection: high-shine leathers integrated alongside clean canvas, bold shades printed across natural hues; sometimes chained together, sometimes a pair simply clutched in one hand. “At FENDI, everything comes from the conversation around the double F which makes us see things in couples,” reflects Silvia Venturini Fendi. “Even the bags become part of a family: big and small.”