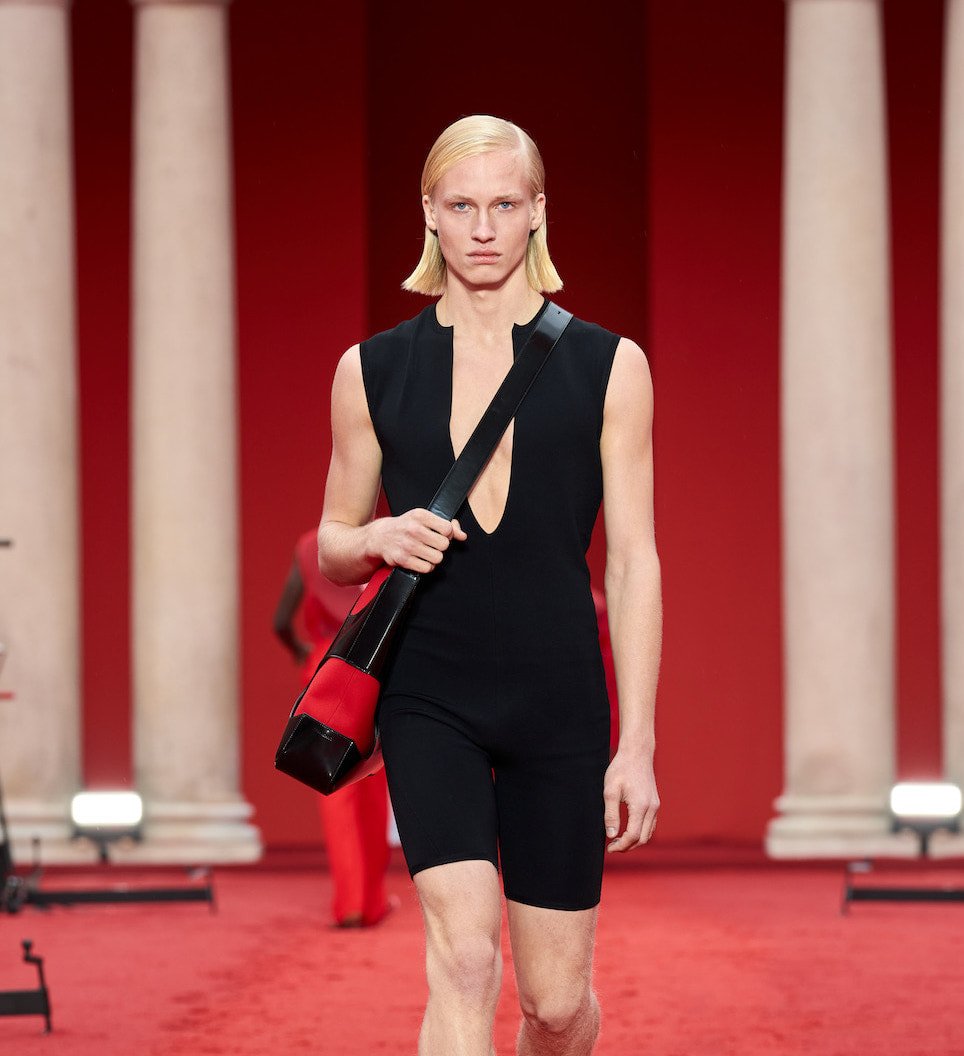 For Maximilian Davis’ Ferragamo debut, the designer unveils a new dawn for the brand: a renaissance of its Hollywood history.

I wanted to pay tribute to Salvatore’s start by bringing in the culture of Hollywood – but new Hollywood. It’s ease and sensuality; its sunset and sunrise.

This fresh language of luxury blends contemporary clarity with the purity of Florentine drape: an homage to the home of the house. Ethereal elegance materialises through sheer knits, liquid silk and layers of organza, but appears grounded by suede sandals drawn from Renaissance reality, and the tangible allure of polished accessories.

The languid, beachfront glamour of new Hollywood is subverted by flashes of fetishism: glossy leathers, second-skin fits, and micro shorts. Elevated everyday essentials – tank tops, polo necks, leggings – appear almost perverse in their simplicity. Effortless knits are wide-woven to reveal the skin beneath, or so fine as to appear translucent. Even eveningwear is imbued with insouciance. Drawing upon the sparkling red shoes Ferragamo made for Marilyn Monroe in 1959, the collection appears scattered with crystals: the Hollywood hallmarks of glitz and glamour refracted anew.

Tailoring twists the classically masculine tropes of eighties executives into a modern wardrobe: perfectly-proportioned, louche refinement formed from fabrics often reserved for womenswear. The tuxedo is imbued with new energy: shirting cut in silk organza and cotton poplin; collars or sleeves removed. The Wanda bag – first introduced in 1988 and named after Salvatore’s wife – is reinterpreted in sleek new proportions, while a prismic shoulder bag carries a sense of minimalist modernity. “I want each piece to feel playful, but also desirable as an object,” says Davis. “To stand on its own.”

Organic forms are translated with linear precision. The new Elina heel is clearly defined, while the revival of a cut-out bag, now realized in polished leather with a contrasting canvas inner, echoes the undulating shapes of sculptural jewellery. Floating scarves appear streamlined; archival prints reduced, redrawn and reimagined. Draped into new forms, they revitalise the formative codes of the Ferragamo DNA. “It was about looking into the archive and establishing what could be redefined to become relevant for today,” explains Davis.

A palette extracted from Rachel Harrison’s Sunset Series colors degradé prints and hand-dyed knits; from optic white to deep indigo, buttersoft yellow to sky blue. A new Pantone red formally codifies the brand’s iconic hue, dominantly visible both throughout the collection and within the show space, colouring the sand which covers the floor. “The sand relates to Ferragamo, to Hollywood, to the ocean – but also to me, and to my own DNA,” explains Davis. “To what the sea means to Caribbean culture: a place where you can go to reflect and feel at one. I wanted to show that perspective, but now through the Ferragamo lens.”

The show takes place in the palace of the former Archbishop’s Seminary of Milan, which was commissioned by Saint Carlo Borromeo in the 17° century and remains considered a historic model of Baroque and Neoclassical architecture. Now the subject of a conservation and renovation project, the Seminary will soon host the Portrait Milano hotel and a new destination in the heart of Milan featuring boutiques, restaurants, and a garden space.