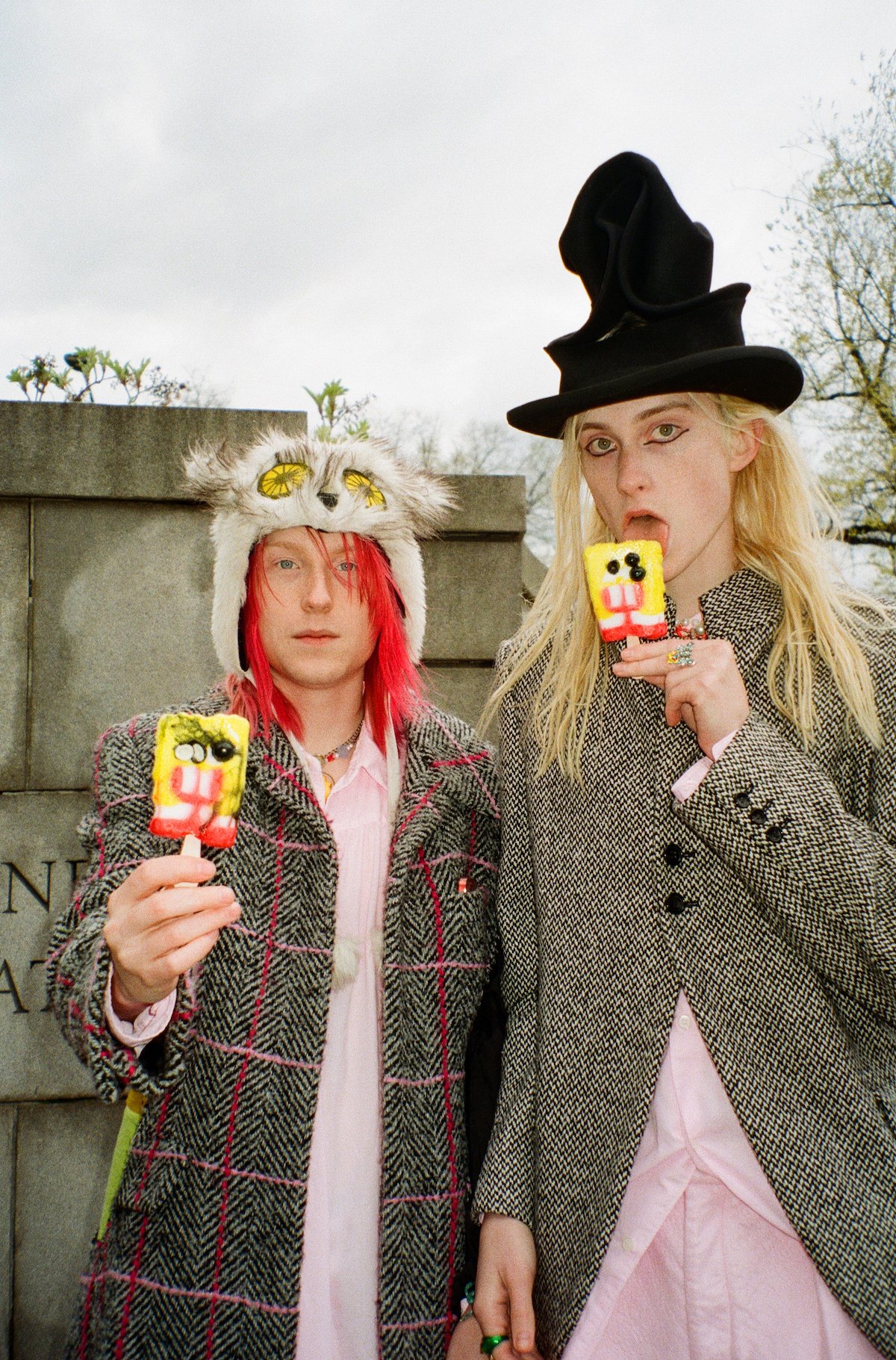 Frost Children, comprised of siblings Lulu and Angel, are a bright new light for the glitchcore and hyperpop genres. The band recently released their second album, Spiral, after the success of their debut album, Elixir Rejection. They’ve played sold out shows in Los Angeles and New York and recently were the highlight of Spotify’s closely watched Hyperpop playlist.

What is really extraordinary, however, is that all of this took place in less than two years. Working from different cities, New York and Nashville, the duo put together the foundation of the band’s sound by releasing a Fall Out Boy cover on Christmas day. It wasn’t until Lulu moved to New York with Angel last year that Frost Children came into its fullest form. They’ve been unstoppable ever since.

Frost Children are mixing and mashing decades of musical highlights into extremely fun musical textures. Interestingly, at times, they also inject some serious and poignant songwriting into their music. The topics range from the mundane on the seemingly nonsensical song “MAKE THE FLOOR DIED” from Spiral to the tongue-in-cheek social criticism of the inescapable system of oppression on their hit, “FOX BOP.”

Rain caught up with the charismatic and stylish duo to talk about their beginnings, influences, and their new emoji inspired album, Spiral.

Mark Benjamin: So tell me, how did the band start?

Frost Children: Well, we’re siblings. We started by releasing a song together right before the pandemic. It was a cover of Fall Out Boy’s Christmas song, “Yule Shoot Yr Eye Out.” We uploaded it on Christmas day.

Then the pandemic happened and we were both quarantined in St. Louis, Missouri, where we grew up, so we started making music for fun. There was legit nothing else to do. That’s how it all started.

MB: Were you into different music?

Angel: At one point, I feel like we had similar references and liked the same things growing up. When we lived apart from each other, we probably got into different sounds.

Lulu: Yeah, I feel like there was a moment where Angel was more into the Alex G thing. We were into the bedroom pop similarly at the same time.

Angel: It started off with us together liking Skrillex, deadmau5, festival EDM, dubstep…those were our childhood influences. Then I feel like it splits into me getting into all the post Modest Mouse artists, like Alex G and Horse Jumper of Love. Lulu at Belmont, I guess that’s when we went into bedroom pop vibes.

MB: You grew up together in St. Louis, Missouri?

Angel: I was born in Kentucky and then moved to St. Louis when I was one. Lulu is two years younger than me and was born in St. Louis. I came to New York in 2016. Lulu then went to Nashville and we reconnected in New York last year.

MB: Was there a moment where you were like, ‘okay, let’s just do this together. Let’s make this band.’

Lulu: A main moment was when I was getting depressed in Nashville and called Angel. I said, ‘I’m gonna move to New York.’ We were already doing Frost Children, but it was hard and not as fun to send stems and songs back and forth.

What’s cool is that we have this physical scene of friends, making all different kinds of music. It feels like something that could have happened in old school New York..artists connecting and hanging out, collabing and doing shows together.

So, I thought, ‘if I don’t leave now, I’m going to get too comfortable here and nothing’s going to happen.’ Finally, I said, ‘I’m going to move to New York with no money.’ That was this past July.

We always talk about how screaming is not always an angry or punk thing for us. We just like to scream!

We already had two longer projects out as Frost Children at that point. But when we started living in the same city together, it was the moment the band came together, at least for me. I was literally unemployed, just living off COVID unemployment checks up until then.

When we were together we felt there was a lot of potential and just ran with it. We said yes to every show option last summer, playing as much as possible and working on music at home. Ever since then it’s been week after week with things happening and planning and keeping the cycle going.

MB: That’s such a cool story. It’s such a New York story, but also it doesn’t happen as frequently as maybe it used to.

Angel: What’s cool is that we have this physical scene of friends making all different kinds of music. It feels like something that could have happened in old school New York..artists connecting and hanging out, collabing and doing shows together.

At the same time, we have the internet where we host online release shows. I think both feel like the most genuine way to do music now: one foot in the real community and one foot in the online community. Because they’re both so real.

Lulu: I feel like we got better at producing. I got more comfortable with my voice and stuff. It’s really funny. We always talk about how screaming is not always an angry or punk thing for us. We just like to scream!

People are like, ‘oh, you’re screaming.’ It reminds me of this band. I don’t even know the bands. I am just always screaming! There aren’t necessarily any influences behind it.

MB: That’s what those bands were doing when they first screamed, right? They didn’t invent screaming.

Angel: Yeah, I think in general, people imbue your music with more intention than you actually had with it. We were doing a Q&A on Instagram this morning and someone was like, ‘what made you choose to blend pop punk and industrial?

It’s not like a choice really. We don’t have a moodboard where we say this song is going to be this plus this equals that, plus a splash of this. We can think about it that way after, but we don’t think about it in the process of making it.

It’s cool that people do. I appreciate that. And so even if we didn’t have that in mind, it’s like when you see a movie and you interpret it in your own way.

Getting more comfortable with our voices on this album, for sure, was also a change. Becoming more comfortable doing ballads and singing sad shit with no hyper edge to it. And putting that in the mix with the other stuff was a huge change for this one. It seems people are into it.

Lulu: Maybe “Snail’s Pace.” It’s kind of about climate change. That’s probably the most political we get.

Angel: What do you mean by political?

MB: Like social change. Or maybe it’s more of a mirror to the things that are influencing everybody, culturally. I call it political, but maybe people think, ‘oh politics.’

Angel: I think for sure. In the end, it’s stuff that’s real to us, you know? Like the way that we relate to people in our lives, gender shit, feelings of excitement, feelings of sadness, and alienation.

“FOX BOP” (above), for example, is about getting the high score on the game Bop It. We’re using Bop It as a metaphor for the system of oppression.

MB: Tell me that’s not political. I love that about Frost Children.

Angel: The journey of the album itself was hard to piece together or the pacing of where we wanted to put things. And so it felt right to call it Spiral. It sounds like it’s spiraling out of control. I feel like if you were to play into that more, it seems more intentional if it’s supposed to be spiraling.

Angel: Yeah, it’s one of my favorite shapes and symbols. The symbol of the spiral is dope.

MB: Do you use that emoji a lot?