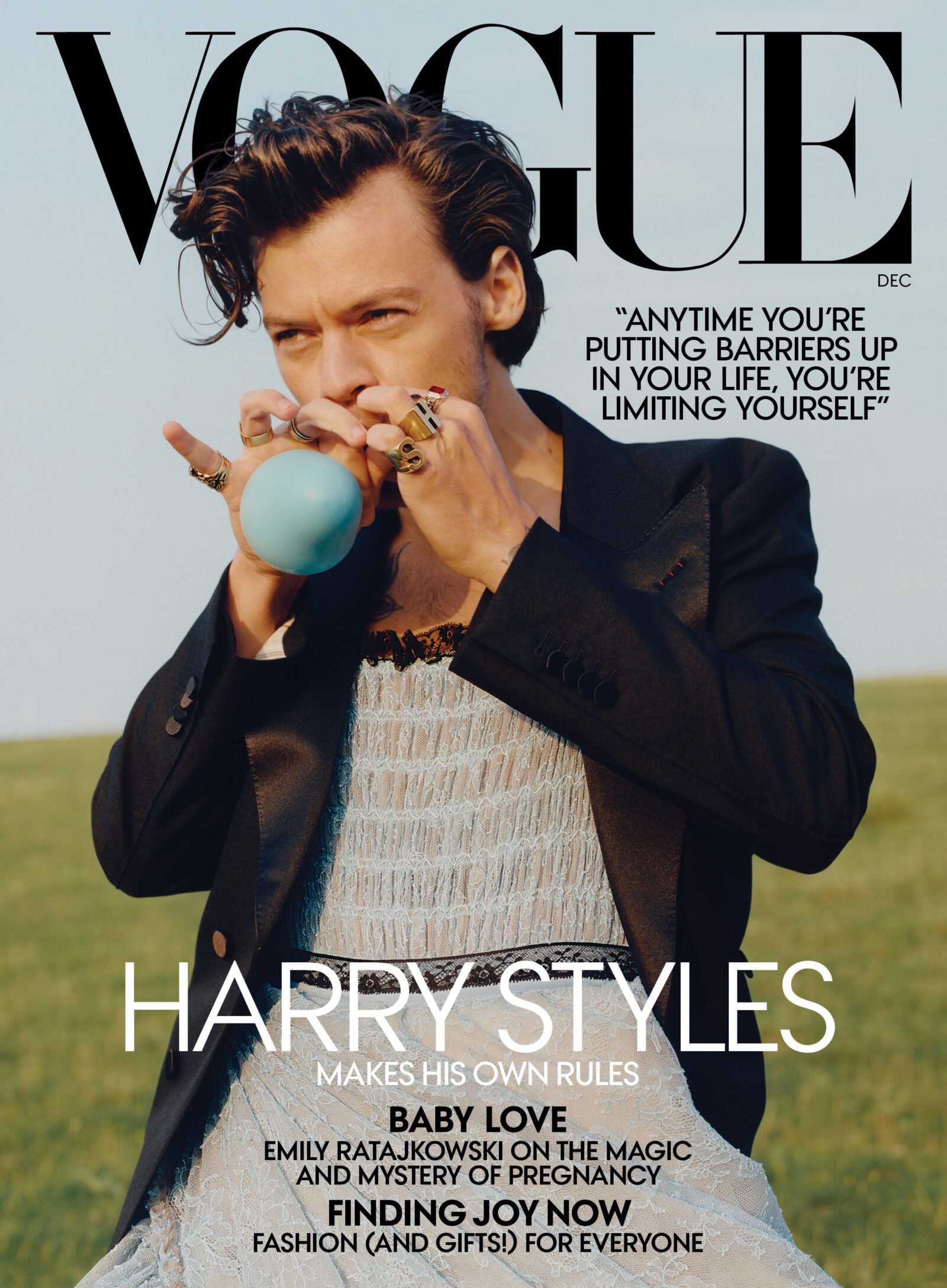 The ranks of longstanding juggernaut publications such as InStyle, Elle, Vogue, The New York Times, and Vanity Fair are having difficulty connecting to younger generations in the digital age. Pleasing two audiences with very different perspectives – one in print, one online – has proven difficult…even for this magazine. For American Vogue, the leader of the pack, the first shift came when Cardi B graced the cover, then Gen Z icon Billie Eilish took the cover four times (once as a digital exclusive).

Finally, Brit-teen heartthrob Harry Styles made history as the first gender-bending man to grace the cover of American Vogue. These covers seemed clumsy and desperate to catch the new wave. British fashion title Another Man was the first to give Harry Styles covers years ago and were always quick to sell out. Vogue took note.

Last month, Vanity Fair scrambled to put together a cover with Grimes shot by legendary photographer, Steven Klein. Not much of these covers made sense… In fact, Grimes had to go on Twitter to set the record straight as the Vanity Fair team cobbled together sensational bits of a story about an artist they fundamentally do not understand.

These longstanding magazines now need the talent more than the talent needs them. The increasing market share of social media platforms like TikTok, where you can oftentimes watch more insightful reviews from fashion fanatics than seasoned critics, signals an overnight paradigm shift the industry was not ready for. This new environment has made the old guards’ model of crafting narratives into self-fulfilling prophecies of fame no longer guaranteed.

Rudderless, this group of publications are no long able to capture what’s cool or provide a compelling vision for the future. They’re following trends, not making them. That’s no surprise when editorial teams can barely navigate TikTok, let alone a Discord server, and be expected to pull off revolutionary cover shoots. And just this past week news broke that Condé Naste had unionized.

The growing pains continue to become obvious. Take Nicki Minaj’s recent self assessment as to why she has never been offered the cover of American Vogue (she has received a few inside spreads). She told JustJared:

You would think that right now hip-hop is the biggest, most influential genre in the world, you would think that the biggest female rapper of all time, who has set so many trends, would have been on the cover of American Vogue, but she hasn’t…when Billie Eilish comes out and sets a trend with her green hair, she’s immediately put on American Vogue. But when a Black female rapper who has been setting the trend for 10 years does it, no one says anything.

As an entertainer with broad appeal rooted in both rap and pop, Minaj’s lack of recognition has long confused her fans and the general public. “Anna Wintour” singer Azaeila Banks had some insightful comments in a viral TikTok about the behind the scenes music industry battle over Nicki and Cardi B. Regardless of the facts involving this assessment, it certainly raises some valid questions. Where is Nicki’s cover? Doesn’t Vogue know this is what the people wanted?

Recently, the Uncut Gems actor, Julia Fox, came into the spotlight as Kanye West’s girlfriend shortly after the split with Vogue cover star, Kim Kardashian. The media followed Fox to Paris Fashion Week constantly noting the similarities of her style to that of Kim. One Vogue journalist carelessly called her style “DIY outfits [that] send social media into a spin” before wryly adding her cutting of a men’s tank top into an outfit was her “most ostentatious homemade ensemble thus far.” All this before dismissing her makeup as simply “topics of conversation on both Instagram and on Twitter,” when they are actually vital conversations about beauty standards.

Sunday night, Julia appeared at Vanity Fair’s Oscars after party. The irony was palpable. She was hounded by Vanity Fair’s own entertainment reporters attempting to troll her, but the joke was on them. Julia owned the night.

Julia Fox is breaking boundaries with her edgy, unapologetic style. Her makeup and fashion style resonate with younger generations who value individuality. The traditional model of aspiring for impossible beauty standards has been supplanted by individual expression and authenticity. Can the fashion press keep up?

From snakeskin to tulle, Rihanna’s pregnancy style could have been on the cover of every major magazine. Unfortunately, this moment received anemic responses by a handful of journalists at Vogue, WWD, and Harper’s Bazaar. The Unapologetic singer “is setting pregnancy style ablaze. It’s not hiding. It’s not accommodating. It’s more of an effusive energy… an unabashed and abundant beauty,” said Michelle Ruiz at Vogue.

Fashion is about evolution. Change is tapping on the door of the highest ranks of seasoned fashion editors. Will these legacy publications be able to adjust their outlook quickly enough before the door is knocked down?