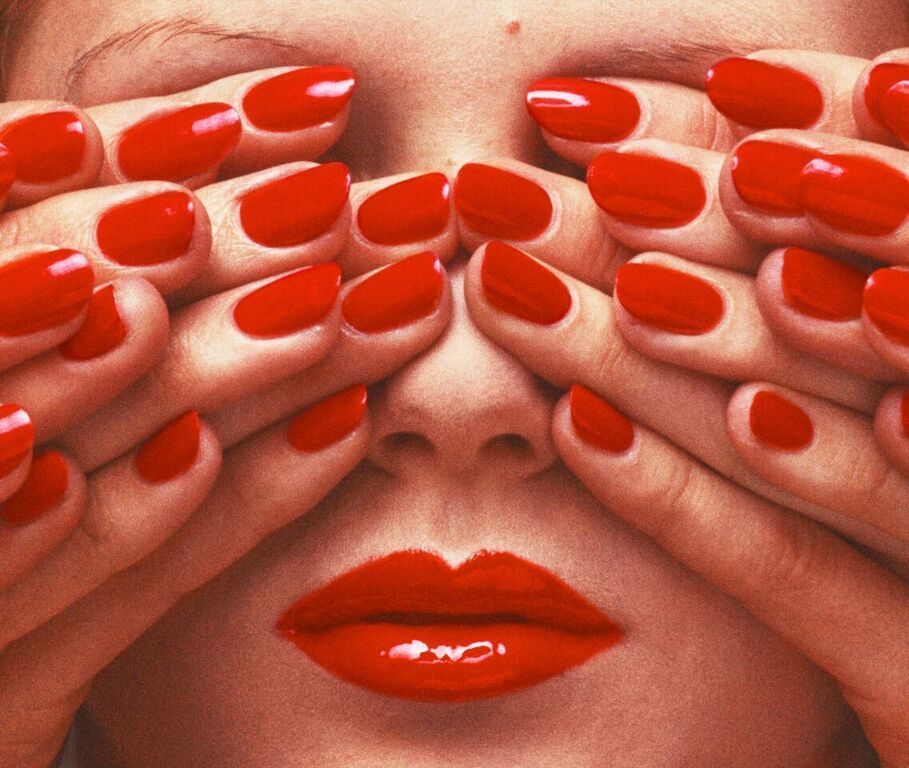 On view until May 13 in Berlin comes a new exhibition at Helmut Newton Foundation, “Guy Bourdin. Image Maker / Helmut Newton. A Gun for Hire / Angelo Marino. Another Story”.

The Helmut Newton Foundation describes the show and unique histories of the photographers, fashion houses, and designers that created some of the most iconic works in the Twentieth Century:

Guy Bourdin revolutionized fashion photography in the late 20th century, similar to Helmut Newton. Both were
the star photographers of Vogue Paris and produced some of the most iconic images of that era working for the
top international fashion houses. While their medium was the magazine, they approached it with avant-garde
point of view and sharp humour. Unique as they were, they both broke aesthetic conventions achieving a sense
of timeless glamour in their editorials and advertising and independently of one another developing a sense of
“radical chic.”

While Bourdin found a prime client in French designer Charles Jourdan starting in 1967, Newton photographed the
collections of clients such as Chanel, Yves Saint Laurent, Thierry Mugler, Mario Valentino, and Blumarine, parallel to
his magazine editorials. Newton called himself in self-irony “A Gun for Hire,” a term then used for the title of the
exhibition of his commissioned work shown posthumously in 2005 in Monaco and Berlin and later in Budapest. A
selection of this project will now be shown again at the Helmut Newton Foundation – for the first time juxtaposed
with the works of his notable French colleague, Guy Bourdin.

Guy Bourdin was a painter all his life and an auto-didact photographer; his career spanned over three decades
since his debut editorial in 1955. He was also an instinctive Surrealist, a creator of enigmatic narratives and a
sophisticated art director. He extended the possibilities of what a fashion photograph might be by
creating images that were, cinematic and unforgettable with intense interplay of light and shadow, hyper
real colors and tight composition. Entitled “Image Maker” the exhibition introduces works by Guy Bourdin
from various publications, iconic and lesser-known images alongside his visionary advertising for Charles Jourdan
shoes. Both formally and contextually Bourdin presented shoes and other fashion products in challenging ways, by
mainly using it as double spreads that resound today modern beyond their commercial context.
In Helmut Newton’s “A Gun for Hire” we can see commissions for fashion designers from the 1990s that were
first published in their own fashion books, and later often shown by the photographer as part of his own oeuvre. It
was never merely a fashion shoot which he produced, but also an unexpected, complex story, tinged with
surrealism or the suspense of an Alfred Hitchcock film – without forsaking the autonomy of the image. It is often
unclear where reality ends and the staging begins; everything seems real and artificial at the same time, and
occasionally bathed in a cinematographic light. We encounter similar visual approaches in the works of Bourdin. In
his later fashion and product shots Newton often staged photographic sequences, such as the black-and-white visual
narrative for Villeroy and Boch (1985), a series of single images for Absolut Vodka (1995), a series with the model
Monica Bellucci in different dresses by Blumarine (1998), and his 12 motifs with bikini models for a sports magazine
calendar (2002).

Small and intimate, “June’s Room” is reserved for friends and colleagues of the Newtons – and this time for Helmut
Newton’s former assistant Angelo Marino, who has gone on to work with Newton’s widow June (a.k.a. Alice
Springs). Complementing the works of Bourdin and Newton, Marino presents under the title “Another Story” an
eclectic view of his immediate environment, which he photographed on the way from his home in Cannes to his
workplace in Monte Carlo. The snapshot-like images, taken with his iPhone, capture fellow travelers, the sea, or
views of architecture and the landscape rushing past the window of the train. The show comprises a collection of
52 panels, each consisting of five color photographs arranged in a tableau representing one week.
On the occasion of the exhibition the book “Guy Bourdin. Image Maker”, with texts by Shelly Verthime (curator
of the Guy Bourdin Estate) and Matthias Harder (curator of the Helmut Newton Foundation), will be published by
Assouline, Paris/New York.

Explore a selection of the works below.