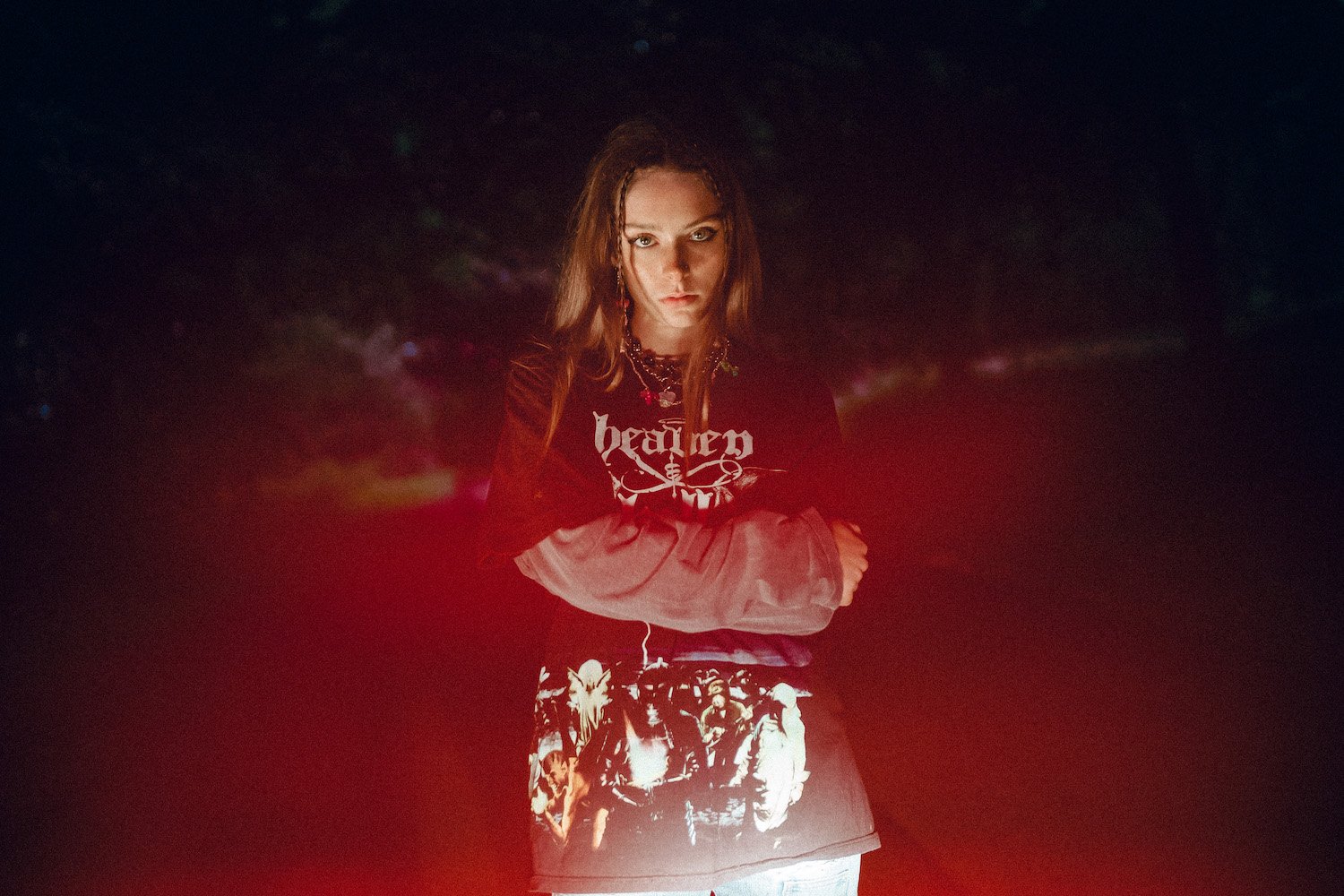 One of the most exciting new musicians, Holly Humberstone, releases her first EP, Falling Asleep at the Wheel. Her latest single, “Drop Dead” premiers today (watch below). She also performed on Jimmy Kimmel earlier this week.

Catchy and soothing, her music instantly draws you into dreamy and descriptive vignettes. At just twenty-years old, Humberstone’s lyrics are full of introspection and relatable life experience. In an exclusive interview, we spoke with Holly to learn about her musical roots and her songwriting process.

Mark Benjamin: Many people probably have not heard of your hometown Grantham in Lincolnshire, U.K.. I read you wrote most of the upcoming EP at your childhood home you described as a ‘withering country home.’ Tell us about it. How was growing up there?

Holly Humbertsone: I grew up in the middle of nowhere with my three sisters. It was pretty amazing growing up here because there’s so much space. All we used to do is play and be creative. We were really encouraged by our parents to do art and music, so there was never really a dull moment. As you can imagine with six of us, it was always a messy house and sadly it seems to be slowly falling apart, but it’s characterful and such a huge part of my identity.

MB: “Falling Asleep at the Wheel” is such a personal and heartfelt song. You connect a metaphor of falling asleep at the wheel to a romance that maybe you start to feel a stranger in. Lyrics like, ‘you never smoked this much when we first met, light up light light up.’ I love these lyrics! I feel like these vignettes must be based on real life events? Is that right?

HH: I try to write about real experiences I’m going through, and a lot of the time I’m trying to work out how I feel about certain things. Sitting down to write this song was a bit like a therapy session for me; I was trying to make sense of a relationship that seemed to be losing momentum and going a bit stale. I try to write as honestly as possible, as I feel that people latch on to the little personal details.

MB: You recently covered Radiohead’s “Fake Plastic Trees” stating it was one of your dad’s favorite songs, and therefore an inspiration for you. What other musicians have inspired you over the years?

HH: My parents have such a quirky music taste and brought us up listening to a huge range of stuff. I remember first discovering Damien Rice through my parents playing it in the car, and resonating with it so much despite being really young. I thought his album O was the best thing in the world and still do! They also loved stuff like Led Zeppelin and Pink Floyd so we really got the lot. They also used to take us to concerts, and I remember seeing Regina Spector live and just falling in love with the songs.

“Writing is my way of processing my emotions, and a lot of the time I don’t even know how I feel about something until I’ve put it into a song and untangled all the messiness in my head.”

MB: You’re such a strong lyricist and songwriter. How do you decide how a song should sound sonically?

HH: I think most of the time the sonics of the song should reflect what’s being said lyrically. Either one can inspire the other for me. For example, when I’m writing I sometimes have a lyric idea first and base the sonics off of that, but sometimes we build a bit of a vibe first and make sounds we love, and then decide what we want the song to say.

MB: You said about your song “Overkill,” “I wanted ‘Overkill’ to capture all the thrill and uncertainty and confusion and the many other emotions that come with falling for someone for the first time.”

I think people really relate to that because I think, at least for me, every time feels like the first time. Was it cathartic writing this song? Writing from a place of vulnerability?

HH: It was definitely cathartic writing ‘Overkill.’ I had just started seeing someone and I was really into them but was so afraid to tell them how I felt from fear of being rejected. I came into the session feeling so confused about the whole situation and writing about it really made everything so much clearer and easier for me to understand. Writing is my way of processing my emotions, and a lot of the time I don’t even know how I feel about something until I’ve put it into a song and untangled all the messiness in my head.

MB: What’s your favorite thing about performing your songs live?

HH: I perform solo most of the time, so it’s really cool for me to see how the bare bones of the songs are received without all the production and added stuff. It’s usually pretty terrifying being on my own, however, it’s pretty cool to experiment with the songs and see how they go down with the audience. I recently introduced a loop pedal to some of the set, and it’s cool for the audience to hear the tunes in a different way.

MB: At the time of this interview we have three songs from the EP out. Can we get a sneak peak of what’s to come?

HH: Expect some more brutally honest tunes! I’m really proud of it and it feels like such a personal first project to put out and I’m really looking forward to people being able to listen to it as a whole project. Each song is very truthful and the EP is just my thought processes and me working through real feelings and making sense of experiences I’ve had over the past few years.

Stream the EP below when it releases, Friday, August 13th.

‘I Can’t Cry,’ indulge in summer malaise in a new fashion film, ‘Plop’