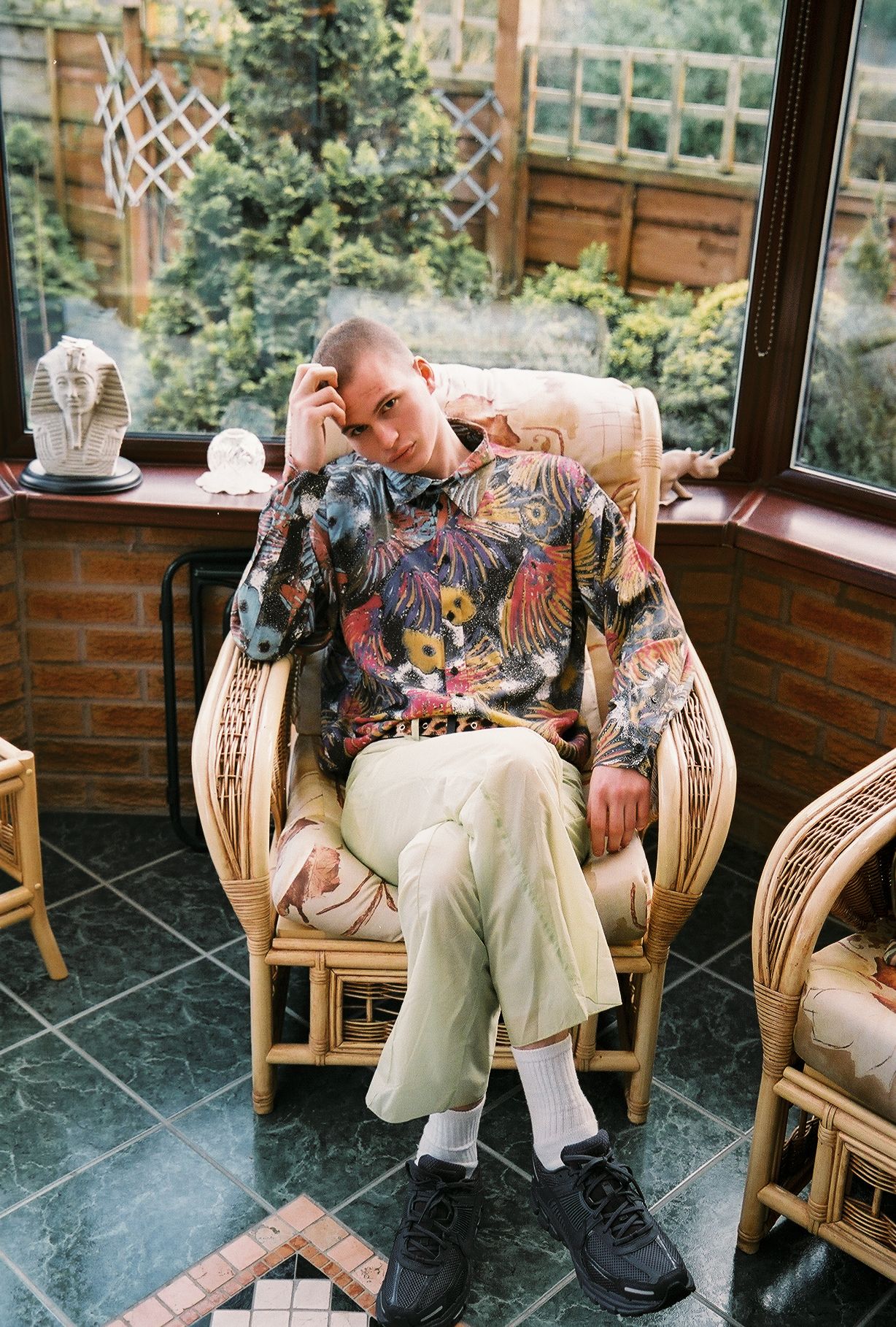 RAIN catches up with Wincent Szczerba, a model at Brother Models and a student of fine art at Manchester School of Art. Originally from the industrial city of Sosnowiec, Poland, near Krakow, Wincent relocated to the U.K. when he was nine years old. We speak with him here about his artistic practice, philosophy, fashion, and the human condition. Photography by Jake Millers, styling by Jess Alexandra. Fashion by Martine Rose, Amiri, Acne Studios.

When you say ’embrace your anxiety’ in your instagram bio, well that’s very interesting…Where does anxiety come from? How do you embrace it without letting it control you?

Kierkegaard said “Anxiety is the dizziness of freedom,” every day you walk the path carved out by yourself and life throws so many obstacles. I even panic from answering such a question! I’ve been in a position of despair and dread where it felt like I was controlled by anxiety, so I ran from it like many people do. It was at this point, when I started talking about my emotions with others instead of bottling everything up and seeking guidance. I was put on anti-anxiety medication which gave me the energy to face reality and when they ran out I didn’t go back for more. I realized the only way to become comfortable with myself was to find out what was really driving my anxiety. I think you learn what kind of human you are and can surprise yourself and then next time you are more capable of handling it.

We see Kanye West, for example, embrace it and amazing things come out of creative people in this way. Are we de-stigmatizing what used to be called mental illness and seeing it more as a gift?

Yes! I think we are finally. You see bands today such as Idles raising topics such as toxic masculinity, which is so prevalent in our society. That can be a massive factor to mental illness. King Krule also writes of depression, rejection and disillusionment which I, as well as many, can relate to but in this process he makes something really beautiful. You can hear it as he escapes to a different world. I get completely lost in his soundscapes. This proves alone that something good can come out of your anxieties.

“An unexamined life is not worth living. My practice is about questioning technology and the media which created a post-truth society where emotions drive humans and not critical thinking.”

Many artists could be seen as having mental illness…Van Gogh, Munch…the list goes on forever. Do you think people achieve great levels of artistic success, while these types of ailments go overlooked?

Due to the manic nature of Van Gogh; the self-mutilation of his ear and suicide is what attracts people to his work so his ailments are not often overlooked. The only way for Van Gogh to stay sane was to paint and his mental paralysis stopped him from doing any work for long periods of time. Popular culture has created the idea of a mad genius tormented by inner demons. Another example of this is Pollock’s alcoholism and domestic abuse being more famous than his drip paintings. Therefore ‘overlooked’ might be an inappropriate word to use but as a student of fine art it’s impossible for me to overlook it. Painting is a reflection of the artist; he/she is present in the frame and in its way to become immortal.

Where were you when that moment came over you when you knew or decided that you were an artist?

I don’t think there was a singular moment that came over me, it was more gradual…decisions while in fine art and thinking about my place in the world. Creating art brings me the most joy in life and I will do it for as long as I can, even if I have to change the form in which I express myself.

What is it you want to say with your art?

What do I want to say with my art? In my opinion, there is no definitive answer, different pieces of work address different themes and ideas about the technological society we live in. If I had to be blunt, my art reflects the constant bombardment of ideologically charged images upon society. I like to explore how we are controlled by these images, how technological advancements give rise to new ways of society and how it is surveyed and controlled. The work I am doing for an upcoming exhibition is to recreate total immersion in a virtual landscape and the constant surveillance. This spoon-fed information is nothing more than distractions similar to a matador distracting a bull.

Does psychedelia or the need to escape inspire your work and process?

For sure, the need to escape our chaotic world and make sense of it in our own way is definitely needed; the studios are a great place for that but they are also a place to share ideas with other students. I use Photoshop as a playground, it has enough tools for me to play out my ideas and visualize them.

It also seems you’re interested in the surreal and technology, why is that? What questions do you want to ask of your audience?

Although technology is manmade, it is what dictates human life. An unexamined life is not worth living. My practice is about questioning technology and the media which created a post-truth society where emotions drive humans and not critical thinking. On a personal level I have been trying to recreate the different states we go through when we interact with technology and trying to recreate a similar state for the audience to interact with. The audience is forced to confront their own experiences which they find themselves in everyday, establishing a new or different perspective.

Do you have artists you look up to?

Is there one in particular you always find yourself referring back to?

Neo Rauch paintings are a huge inspiration for my practice right now. The way he intertwines images, the way the images are a snapshot of different times in history and their juxtaposition are very powerful and interesting. I don’t particularly find myself referring back to many artist or maybe I do subconsciously but most of the time I am trying to create something new and original.

You’re also a model that portrays fashion, clothing, which are really just identities, fantasies, and lifestyles…do you find these things interesting?

Yes, to be honest I enjoy the editorials a lot more than the commercials ones because more thought goes into the concept of the shoot, the whole production is there to create a story. The most interesting shoot was actually a short film called “UNDER” where I played a gang-member whereby he was forced to seriously injure another man. The director was trying to create tension and what will happen next, inner monologue. This short film was heavily inspired by the French cult film “La Haine.” Never having done performance before, I had to find a way to become this person, so before every take I smoked a cigarette. While the nicotine is rushing through my head, I envisioned the violence that would play out on this man, effectively building up the courage to do it as if it was real life.

This was a great learning experience and I got to experience how a film is made. This made me realize that modeling is just acting. Each shoot I do I would try to come up with an identity to play out for the camera. The identity is based on the clothes, environment and instructions from the team. This helps me feel more natural in the space and hopefully the pictures come out more impactful.

I think I started to appreciate it a lot more since I started modeling but I see it more as a product of whatever culture we digest. We are what we like. I mostly just stick to a pair of docs and old clothes. It can be very idealistic and elitist but I am just glad to be working for BROTHER which has created a family sense in the business. It pushes away from socially constructed beauty ideals and the models are a true representation of our generation.

Where does fashion stop and art begin?

Fashion is limited by the human body because it’s created to be worn. It has a certain commercial price based on the goods used and the perception of the brand. It is an ever-evolving form that changes based on trends right now that we are seeing. For example, the vintage revival trend with a higher focus on fashion from recycled materials and sustainability.

That’s where it stops for me; art is created regardless of the price…it might one day be worth something or nothing. Art begins with curiosity.

What does individuality mean to you?

I think it’s about questioning everything around you, having hard conversations with yourself, not accepting things just because it is the way the world works. It is about breaking boundaries, challenging them and developing as humans but also having the courage to express it.

In the context of social media?

On social media it’s incredibly hard to be an individual as most posts I see are slight variations of the same post; the same selfie, the same drawing of a celebrity or the same picture of the ‘best’ night out with your friends. I try not to take it too seriously because you run the risk of selling yourself short or creating the overemphasized image of your character in that virtual space. The problem of social media is that is so easy to create an entirely false persona that is unrealistic and unattainable.

Dior pre-fall with art by Soroyama