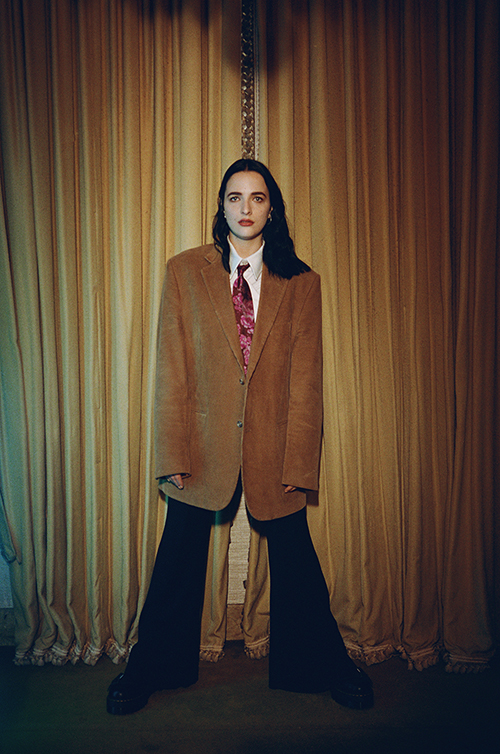 French indie pop musician, Silly Boy Blue, is something of an enigma. Her surreal and atmospheric vocals, visuals, and lyrics draw you into an otherworldly place of reflection. It is a world that is bound by mysticism and truth – as haunting and ethereally beautiful as it can be at times. Her previous EP, “But You Will” (2018), which you can stream below, was an experimental collection of songs that instantly became fan favorites.

We caught up with her on the release of her new single “Hi, It’s Me Again” – a soulful song that she wrote, “instead of texting or calling an ex, because I couldn’t find the words at the time. These are all the things I wish I could’ve said and asked, that’s why it’s called like that. It’s just before resilience, when you start to understand the breakup, but you still have so many questions popping in your head, and I chose to write them down instead of being the crazy ex-lover, again.”

Mark Benjamin: It’s impossible to avoid the question of your band name, Silly Boy Blue, which shares the same name with David Bowie’s hit song. Why did you choose the name?

Silly Boy Blue: I’ve been a huge fan of David Bowie since I was a kid. His work and him as a person have marked my whole life. I really wanted to make a link between my solo project and him. And I really love the fact that it’s one of his first songs, when he was a young man not that sure of himself.

MB: How was growing up in Nantes, France?

SBB: It was nice! That’s a great city, filled with people who loves music. I had a couple rough teenage years, but not because of the city, just because of what was inside my head.

MB: How did you first get into music? How was your experience in university?

SBB: I started writing songs around 13. Then I recorded them on my computer with the cheapest plug in, and I posted them on the internet. I then played in a band, and another one, and another one. And finally, my solo project. I’ve been to many schools, and I kind of liked it. It made me feel secure, not doing only music but other stuff.

MB: Your vocals are soothing and haunting – your lyrics cut deep. What is your songwriting process like?

SBB: I just feel the urge to write because I can’t really express my feelings otherwise, so I take an instrument like a guitar or a keyboard and I start playing notes and singing. When I find something that suits me, I write the lyrics. I can’t really stop sometimes, so I don’t sleep that much!

MB: You were quoted as saying: “[Making this album] helped me to hate myself a bit less. My biggest dream would be that my album falls into the hands of an equally fucked up girl, who doesn’t know who she is, if she prefers boys or girls.” – who was this person for you?

SBB: David Bowie, obviously. But also Joan Jett, St. Vincent, Fever Ray, Mykki Blanco, Brian Molko, Christine and The Queens, Xavier Dolan… There are so many people that made me deal with myself through their art.

SBB: Mostly I follow what I would like to wear and it’s mainly all black outfits, so I’m not really creative in this way. I’d love to, though, try some new stuff. My stylist, Caroline Dussuel, is pushing me in new directions that I love!

MB: The visual components to your music are incredible. How do you approach your music videos and the message?

SBB: I need to illustrate how I feel through visuals and references. I’ve always been influenced by cinema and shows. My first EP was name after a quote from the film “Eternal Sunshine of The Spotless Mind.” I try to work with people that will know how to translate my songs into images. Alizee Ayrault, the director of “Hi It’s Me Again,” and Manu Fauque, the photographer, did an amazing job.

MB: How does your new song “Hi, It’s Me Again” depart from your previous album, “But You Will”?

SBB: I’m less scared of being who I am, but not fully confident yet. It’s an evolution, but there’s still a long way.

Aja on her single, ‘Who’s Gonna Love You?’

Planningtorock ‘gender is just a lie’