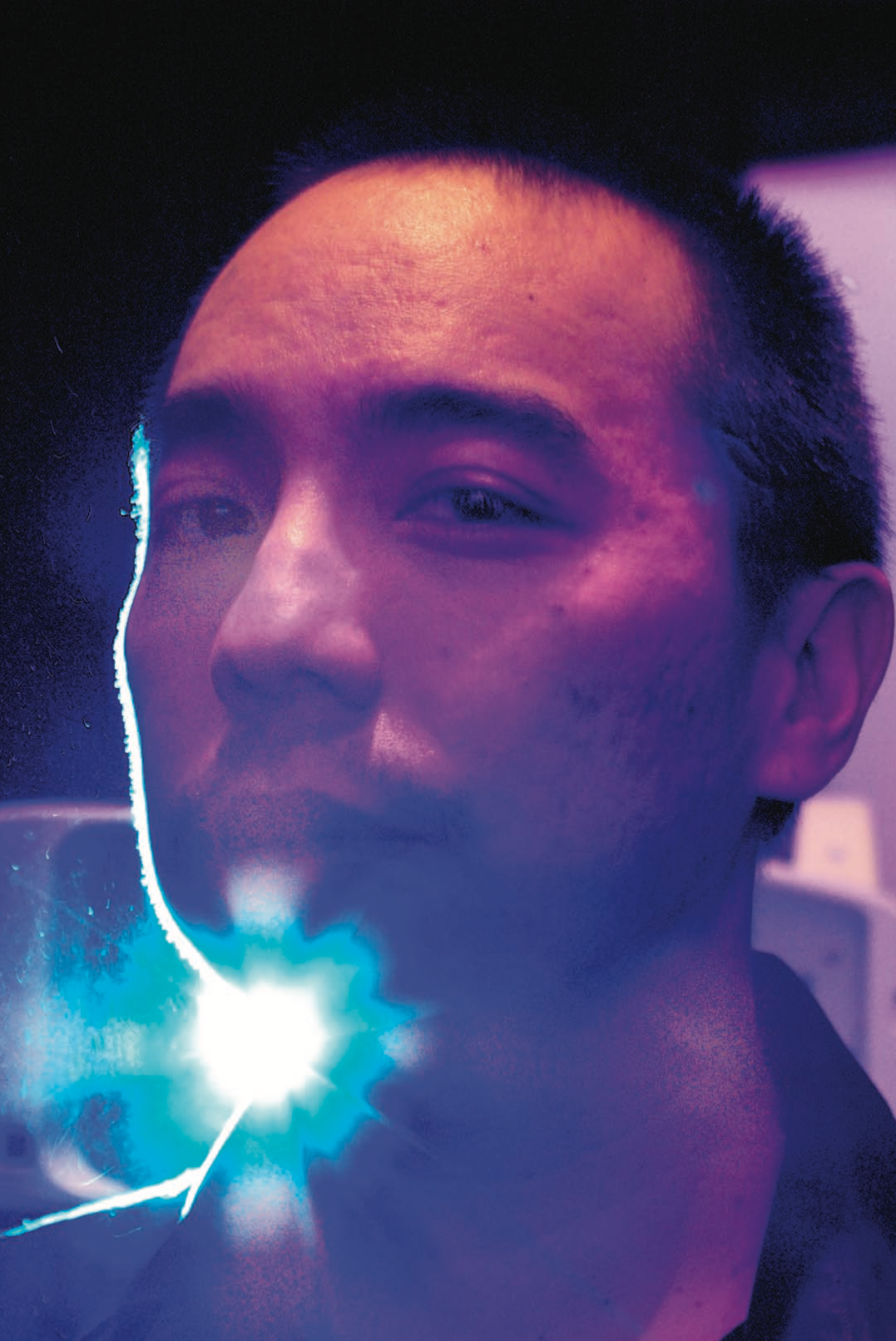 In 1993, Apichatpong “Joe” Weerasethakul released his first film, Bullet. Since then he has released more than 40 short films and installations—including Vampire, which was commissioned by Louis Vuitton—and eight feature- length films. Almost all of his features have gone on to garner prestigious award nominations and wins, including the Cannes Film Festival Prix de Jury for Tropical Malady and the Palme d’Or for Uncle Boonmee Who Can Recall His Past Lives. We talk with him about his most recent film, Cemetery of Splendour (2015), and the unique journey he has taken as a filmmaker.

MARK BENJAMIN: Hi, Apichatpong. Where are you at the moment?

APICHATPONG WEERASETHAKUL: I am on a plane to Bogota. I just said goodbye to my dogs in Chiang Mai.

MB: I first came across your work at the New Museum in 2011, with your exhibition Primitive. It was an alien world to me, not just because a group of men built an actual spaceship, but because I related to that quiet melancholy and the need to escape realit —that youthful imaginative escapism. To be honest, sometimes I daydream about the fields in that film. Do you feel that, too, when you film?

AW: I was working with teenagers in this village in northeast Thailand. During the day it was scorching. I could hardly wait for the night to arrive because it brought comfort and imagination. In the dark we experimented with lights and military flares. Our ship transformed into a womb for sleeping and dreaming in.

FILM LANGUAGE IS AN EMOTIVE ONE THAT WE EVOLVE TOGETHER. SPOKEN LANGUAGE IS JUST AN ILLUSION.

MB: I also noticed your long shots. You don’t like to cut the camera away from scene to scene like a lot of high-powered Hollywood action movies do. I feel like you treat your characters just as tenderly as you do the filming process. Would you agree?

AW: Sometimes I like to observe details—textures, little movements of things, shifting shadows. The focus is not only on the characters. Everything is a character.

MB: Uncle Boonmee Who Can Recall His Past Lives, of 2010, is one of your most popular films. It was also notable because it was the first film from Asia since 1997 to win the Palme d’Or at Cannes. It was one of the most engrossing films I had seen in a long time. There is not much I can compare it to. Tell me about how that film’s success changed your trajectory. Did it change your approach to filmmaking? What does it mean to be a Thai filmmaker?

AW: The film’s success brought me the wider world—people. But it didn’t change my filmmaking much. I don’t think there’s such a thing as a Thai filmmaker. Film language is an emotive language that we evolve together. The spoken language is just an illusion. Since that film, I have been spending more time doing shorts and installations.

MB: The last film I watched of yours was Cemetery of Splendour, which—incredibly—I watched on Amazon Prime. The story opens with a number of soldiers stuck in a deep sleep in a Thai hospital. Spirits dressed in modern-day attire, such as a princess, appear and speak to the caregivers about the ill soldiers. Some have interpreted that these hallucinations become indistinguishable from reality and view this as a metaphor for societal issues. If that is the case, what are those issues?

The film speaks about the existence of other realities, the need to escape from boundaries—time, rules and beliefs, nationalism, and so on. In the end, when we realize about the possibilities, we also realize we are trapped. The only way out is maybe to use drugs or to sleep

AW: Similar to my other films, this speaks about the existence of other realities, the need to escape from boundaries—time, rules and beliefs, nationalism, and so on. In the end, when we realize about the possibilities, we also realize we are trapped. The only way out is maybe to use drugs or to sleep.

MB: Your parents were both physicians in a Thai hospital, right? Did that play a part in inspiring Cemetery of Splendour?

Sometimes escape is the only choice we have. The ways we lead our lives are full of different forms of escapism. I think it is important to be aware of that. When I censor myself, for example, I should recognize that I do it out of fear of danger, rather than pretend it is a creative choice

AW: Yes. My mother introduced me to a microscope and a stethoscope—and a Super 8 camera—to see and to hear different things. At home we had medical books with ghastly pictures that I was fascinated by. Despite all the excitement, my childhood was serene and banal. Time was slow. I miss my youth a lot.

MB: In American politics, we have seen what happens when hyperbole becomes reality. The long-running satirical show South Park recently decided to stop parodying President Trump because reality had become more ridiculous than anything Matt Stone and Trey Parker could think up. What do you make of it? Do American politics interest or affect you?

AW: The US became the key player in Thailand’s economy and politics since the Cold War. It created monsters in our police and military, those who established the privileges our current dictators enjoy. Trump’s style feels at home here. Fittingly, the US appears unperturbed by the current atrocities happening in Thailand. To me, we have far worse leaders. It would be odd to lament what is happening with Trump while we have our own beasts to deal with.

MB: You are an openly gay filmmaker and themes of homosexuality and queer love come up in your films—quite beautifully in Tropical Malady, I might add. How does being a gay filmmaker affect your approach to storytelling?

AW: I think homosexuality is irrelevant in this regard. Each of us has a unique experience that contributes to our way of seeing things.

MB: I really love your website kickthemachine.com. It’s part art project, part resource, as well as being an archive of your work, which is great because you are so prolific! What would you say to someone who is just now ready to explore your work? Have you stopped counting the number of films and shorts?

AW: Thank you very much. Honestly, I wish I had done more films. Making them isn’t work, or it doesn’t feel like work. I always tell people not to expect anything from a film.

MB: Nature is really important to you—and to us as well—we are called RAIN, after all. Are you concerned about the way the planet is going?

AW: I am. But like many people, I always forget about it. I think I take all the trees in my films and where I live for granted.

MB: The theme of this issue is “the summer of unrest”—a nod to the political unrest sweeping the world but also to the melancholy of a hot summer. I feel like resistance and escapism are both persistent themes in your work. Resistance through escapism, even. Why are these ideas important to you?

MB: Your film Syndromes and a Century, of 2006, had four scenes censored by the Thai Censorship Board the following year. You refused to cut the scenes and instead withdrew it from Thai release.

You were quoted as saying, “I treat my works as I do my own sons or daughters. I don’t care if people are fond of them or despise them, as long as I created them with my best intentions and efforts.” I love that. There was even a protest. Tell me about that experience.

AW: I learned a lot from that episode. We started a petition to change archaic legislation, we held seminars and protests. Finally, we managed to get the censor board transferred from the police to the Ministry of Culture. They established a film-rating system, though it is still conservative and used arbitrarily.

After that, I moved from Bangkok to live in Chiang Mai, in the north. I decided not to be involved with anything governmental because I am tired of bureaucracy. With the different ways of distributing one’s work available now, I focus more on exploring moving images, rather than trying to change the old system.

MB: What’s the most rebellious thing you’ve ever done?

AW: Nothing, really. But these are the things I want to do but cannot—live in another country, make a documentary about Thailand’s prisons, quit email.

MB: What are you looking forward to at the moment?

AW: I am developing a new film in South America. Maybe it is to test the waters. I want to see the effects of a new geography.

MB: Any advice for young creatives or aspiring filmmakers?

AW: Do things that you have experienced, felt, touched.

An interview with Wayne Coyne of The Flaming Lips