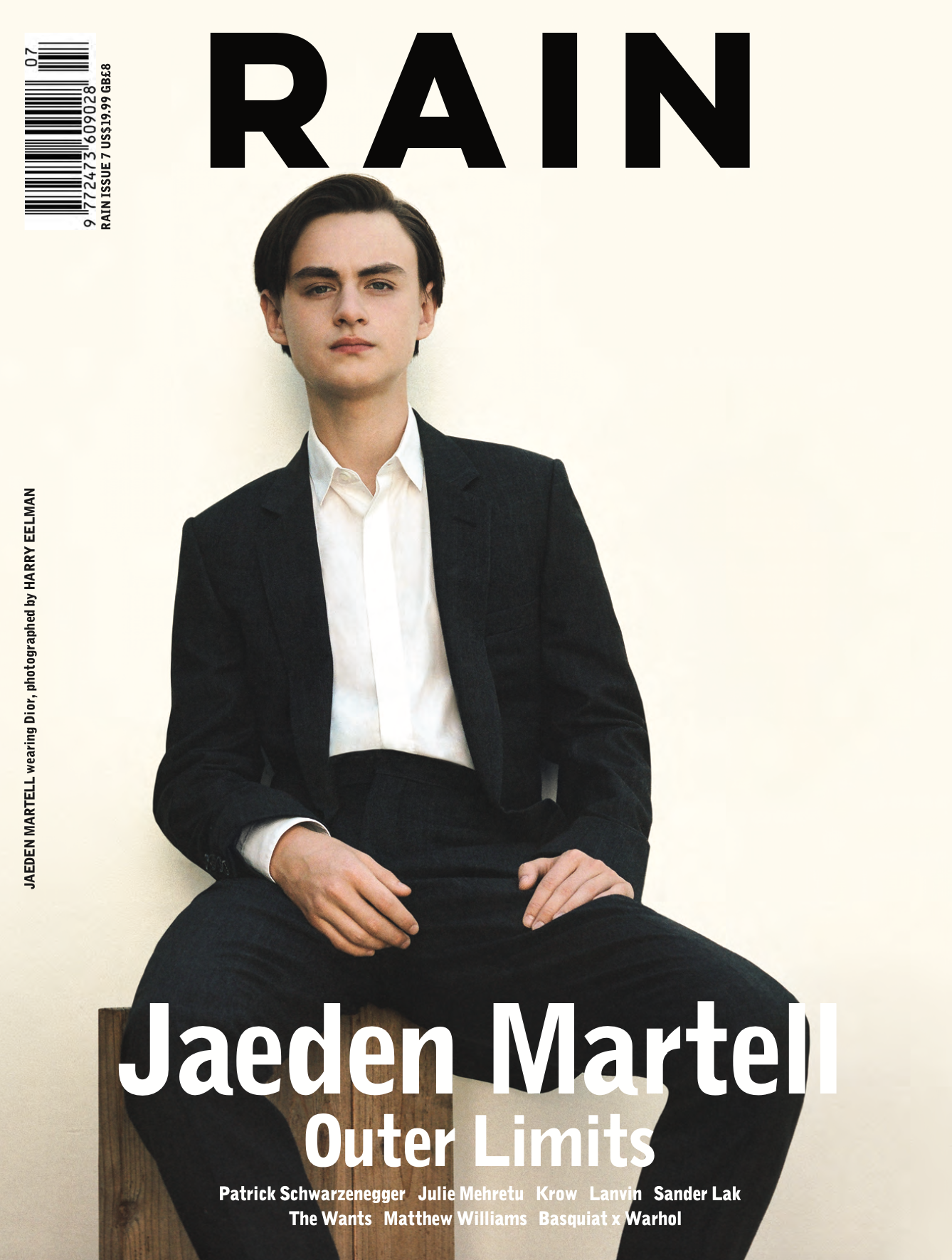 Rising star Jaeden Martell first came into our cinematic consciousness when, as a self-taught 10-year-old, he joined the cast of the comedy-drama St. Vincent, making his on-screen debut alongside none other than Bill Murray. Now, after having appeared in It and It Chapter Two, the strikingly grounded Gen Z actor is reiterating his taste for horror with a leading role in the indie—and no less terrifying—film The Lodge by Veronika Franz and Severin Fiala. The introverted personality he depicts in this is in stark contrast to his character in Knives Out, a star-studded thriller released in November, in which he plays a provocative, comical-yet-somber boy. It’s a radically diverse repertoire for a 16-year-old actor to have. Meeting with RAIN, Martell spoke about his relationship to social media, to his friends, and to killer clowns.

Alice Pfeiffer: How did you prepare for your role in The Lodge?

Jaeden Martell: I watched the directors’ first movie to get comfortable with the tone and the overall feeling of their films. I studied who my character was and his relationship with the other characters, the most important one being with his sister, whom he is very protective of. I needed to translate that, as well as his strong love for his mom, which turned into anger and jealousy against the soon-to- be stepmom. All these aspects were key to understanding my role.

AP: How did you prepare mentally for a role that encompasses— spoiler alert—the death of parents or a suicide scene, among other hardship?

JM: We were in a real lodge, surrounded by snow, and it was extremely cold. The set had the same tone as the movie, so it was easy to get into that mindset. The directors also really helped me get into the role by making me feel both comfortable and uncomfortable. They took me to the attic to scream as loud as I could. I eventually started to feel comfortable about it, just as I did later, on camera.

AP: What was your experience of working with Bill Murray?

JM: I learned a lot from Bill. St. Vincent being my first movie, I was constantly terrified and stressed. I was so young and was traveling to New York to shoot, and Bill taught me how to relax, to be comfortable. I had to learn a six-page monologue and speak to a giant crowd of people, which was so scary for a 10-year-old. He gave me candy to keep my energy going, showed me how to meditate. He really was a model for how to treat others.

“It’s challenging to always be scared. It’s an interesting emotion that you have to find a balance with. If you see a killer clown trying to eat your friends, obviously you can’t relate directly”

AP: What’s the most challenging aspect of acting in horror movies such as It.

JM: It’s challenging to always be scared. It’s an interesting emotion that you have to find a balance with. If you see a killer clown trying to eat your friends, obviously you can’t relate directly to that and go into a memory to find something similar. So you have to avoid being over the top, because it becomes physically and emotionally exhausting with all the running and screaming. The script helped by balancing this with comedy and friendship. During It, they kept Bill Skarsgård [who plays Pennywise the clown] secret from all of us, so the first time we saw him was on the movie. It felt creepy and unsettling watching him get into the character.

AP: In comparison, how was the shoot of Knives Out?

JM: This was not very light-hearted but felt that way. It felt like being in a room full of egotistical family members fighting over something. It was very fun to show this constant bickering. The crowd of actors was amazing, they were all so sweet. You would expect all these big actors to fight or clash, but everyone was so caring.

All the nervousness went away when I started working with them eventually, the characters come first and personal feelings second, and every actor has to learn to get over their personal feelings. Once you’re acting and you’re made to enact father and son and show love for each other, all the barriers are open. Acting is the best way to get to know someone.

AP: What aspect was the most rewarding when shooting Knives Out?

JM: Working with these actors was amazing, but also playing a character who pushed me out of my comfort zone and made me a better actor. My character is a pretty bad person, I would say. It was definitely challenging saying the things he said, doing the things he did, but the director really helped me feel at home with the role.

I now feel I want to play different characters, instead of playing the shy, quiet one. The ability to change is obviously key to being an actor, and this was the first time I played a character that was so far from me. I had no crutches, no memories to look back on, or personal tropes, so I had to completely reinvent myself. Today, I consider new genres to challenge myself, which could include anything from comedy to a Broadway show.

“This was the first time I played a character that was so far from me. I had no crutches, no memories to look back on, or personal tropes, so I had to completely reinvent myself”

AP: You’re friends with the crew of It. How do you avoid falling into a competitive mood with each other?

JM: We obviously go out for some of the same things, but they are all my best friends. We all go out to celebrate, we’re not competing with each other—we’re happy for each other constantly. I know they’re talented, and there are roles for everyone. Some roles are better for other people, so when it happens, you remember everything happens for a reason.

AP: You have 3 million followers on Instagram. How would you describe your relationship to social media?

JM: I personally am very bad at posting—it’s not something I find super-important in my life, as a person and as an actor. I find my work to be most important. Obviously, Instagram gives people a voice, and gives people the ability to spread awareness about different topics— something that would never have been possible before—but it can dominate your life and become obsessive. Our real-life experiences are much more important than what we show on social media. Some people feel that if it’s not posted on Instagram, it didn’t happen, which I find to be untrue—you have your memories. How many followers you have is not important in the grand scheme of things.

AP: Would you ever consider going into directing?

JM: That’s something I really want to do and have been thinking about for a really long time. Writing and directing are things I really look forward to doing, but I’ll always have a love for acting.

Madison Velding-VanDam of The Wants on wanting to want