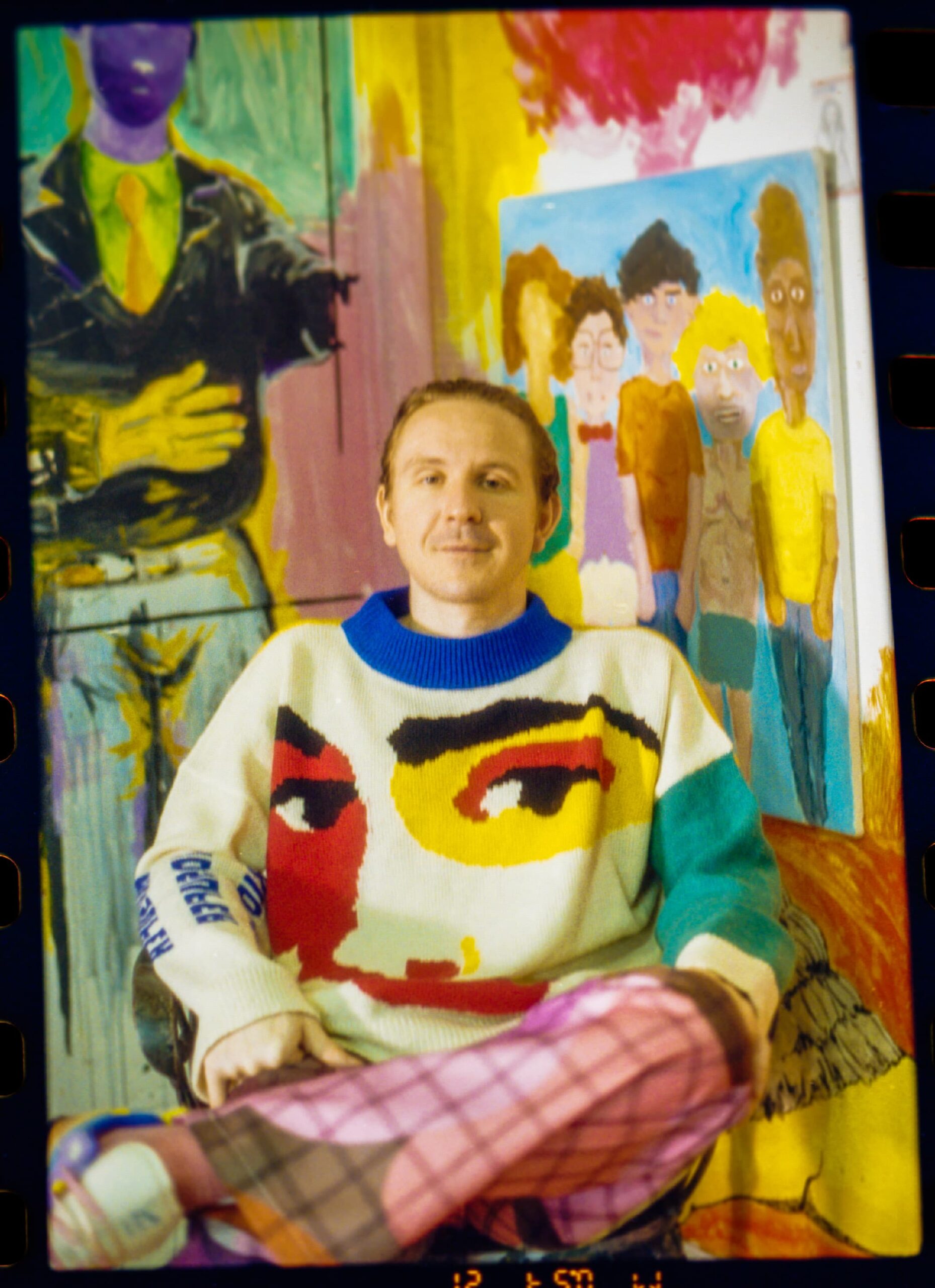 KidSuper is the mind child of New York-born multimedia artist and entertainer, Colm Dillane. He has shown his collections at Paris Fashion week and last year won the LVMH Karl Lagerfeld Prize. Over the past few years he has directed award-winning short films, music videos, and sold-out solo art fashion shows. A number of musicians have worn the brand such as Young Thug and Joey Bada$$ have worn KidSuper.

Dillane’s ultimate mission with the KidSuper brand is to remind people that anything is possible. One way he illustrated this was through a viral stop-motion film for his SS22 collection. And last season, KidSuper took over the internet with a Christie’s live auction runway show for FW22.

After collaborations with PUMA and Modelo, Colm is working on his next big act, KidSuper 2.0, a 10,000-square-foot warehouse in Brooklyn that will include a recording studio, stage, event space, sneaker manufacturing, and bottle recycling. Rain caught up with Colm to find out how he became a master of DIY – from art to fashion to production and how he sees the ultimate expression of KidSuper in his forthcoming dream factory.

I’ve been watching KidSuper for over three-ish years, and it’s an incredible journey to watch unfold. I’m sure it has been for you as well.

Yeah, unexpected. I had a plan but did not see it going in this direction.

What did you think was going to happen?

I didn’t think the fashion industry would accept me with open arms. It took a very long time, and they weren’t that open, but eventually, they opened up to it, so that’s pretty cool.

I remember watching a video when you applied for the LVMH Prize, and Virgil was in the room.

It was an exciting conversation. He took a considerable interest in what you were doing and your values. Would you agree with that?

Yeah, we didn’t know each other well. We only met a couple of times, but Virgil was the guy who not only broke down all walls for streetwear and people of color but he also broke down a different thought process.

It was like, oh wait; this streetwear thought process is just as necessary as whatever you consider fashion or high-end thought process. Maybe weirdly, they are more similar than the world presented them.

Virgil brought significant awareness to those types of people and the celebrity aspect of designers. Starting a successful streetwear brand is just as hard as starting a high-end luxury brand. So, I don’t know if I could be doing what I’m doing at any other time.

For me, clothing was the only thing because it’s the most democratic of art forms. It was the only thing people were willing to take notice of me. I started so young. No one wanted me to creatively direct photoshoots or art or whatever. You didn’t care to buy a painting from me, but you might spend $15 on a t-shirt, right? It was an easy entry for people: buying stuff from me or paying for my creative abilities. So, I had to create this big brand to be considered a creative mind.

I’m always trying to shoot bigger than I am.

Everyone has their own story. I was making this brand so people would notice me as this creative. I was like, look, I made t-shirts, but I also painted the t-shirt, I directed the photo shoot, and I edited and filmed the video. Then people were like, ‘Oh wow, okay, let’s get him to do videos, let’s call him to do the artwork. I was using the brand as my platform.

One of the more inspiring things was connecting with people through art. Everyone has clothing, but not everyone has artwork. Not everyone can have it, so that’s what I love about fashion.

Before, the industry looked at fashion and art separately. Brands are now trying to embrace art. The critics would not have it if a designer did something like Kim Jones.

These artist collaborations are becoming super important. I loved what you did in the last spring 2023 show, which was a literal interpretation of art with the auction and the runway. It was fun and theatrical. It reminded me of Viktor&Rolff, but it felt more democratic somehow.

I think they’re pretty different. I was 0% inspired by them. The original idea is the auction. I knew it existed, but their thought process and my thought process to reach the end goal were very different. I cared about having it interactive; I love this idea of not knowing if you’re a part of the auction or not part of it, not knowing how to behave, and being pushed to not only be the spectator.

For spring, I did a stop-motion film, What Do You Want Do Before You Die? For this collection, I wanted to do an art show. The idea came about after realizing spending $200,000 on just a catwalk didn’t make sense.

I want people to know that maybe I didn’t go to Central St. Martin’s, and perhaps I’m not the best seamstress. However, I deserve to be in these conversations, so let me show you that I can paint and come up with a collection. I wanted to do an art show, and I also love Paris’s credibility. It’s already a bit esteemed, which is what a gallery does for art, anyways. So, I was like, ‘okay, I’ll do an art show. Each painting will correlate with a look, which was relatively straightforward to me.

How do I get the crowd interactive? This auction came as an idea of getting the crowd involved and changing what you think a fashion show should be. It grew into something I didn’t foresee, and honestly, I was super nervous since there were only 24 looks. If no one bids for all 24 looks, this will be the most depressing and awkward tension feeling of all time.

Had I not hired Lydia Fant or Lydia Fant, the Christie’s auctioneer, this whole thing would’ve blown up in smoke. You had to convince the crowd to participate in bidding. You were relying a lot on this crowd. There was one moment when the first canvas walked out, and she goes, ‘Okay, we’ll start the bid at $7,000.’ The whole crowd laughs because they’re like this isn’t serious. This is a dumb or a funny joke. I’m in the back thinking, ‘Oh my God, are they just going to laugh the whole time? It was fun.

That’s awesome. You take a collective approach as a brand, exchanging ideas, and producing. Take me through how an idea goes from paper to runway.

You need a minimum of 25 to 35 looks for a fashion show. Let’s say it’s 30 looks with accessories, shoes, tops, and bottoms. You’re at 120 items minimum that you’re designing. I don’t have a design team, so I’m creating 120 items. You don’t have too much time because you have to manufacture. I come up with the concepts of marketing also.

I was a math major in college, so that I can be logistical about it, but it can be a lot. The problem with KidSuper is that 90% have original artwork. I’m drawing, but I usually draw small scales, so you don’t know how big the drawings are since I can blow them up. For the art show, I made 30 paintings. I did not sleep. I’m making a painting; then, I’m altering the painting to fit my design. The process was thorough. People don’t talk about how hard it is, to be honest.

I also want to ask you about The Warehouse you’re developing.

It is the physical embodiment of the KidSuper spirit:

For me, what people describe as the childlike sense of wonder is the best way to view life or experiences. I don’t see a world where it would be better to think another way. This new warehouse is me playing house with my dreams. We will have a recording studio, a gallery, a photo studio, and a store.

Jägermeister is sponsoring the recording studio, they’re putting a bar in, then Puma is coming in, and other brands are coming in. I’m trying to use all my money to make these cool spaces and projects. So much stuff came out of our last building, from musicians to brands, artists, jewelry, and random stuff. This one’s 10,000 square feet, so ten times the space. Hopefully, it leads to 10 times the creation.

It is entirely my dream factory. So much so that I like cannot believe it. The architect for it is my best friend from when I was 15. We started making t-shirts together, and now he’s a professional architect. We collaborated and decided on it all altogether. It’s pretty nuts.

Are you having an opening event?

There are going to be phased to its opening. I want to sell other brands for the storefront, so we got the rights to do Balenciaga and Gucci sunglasses. We’re getting close to having these high-end brands along with KidSuper.

Many young people don’t have anything like an Opening Ceremony in the city.

Yeah, a lot of people grew up with Supreme. I love that idea: a new space that introduces people to their culture or a new group of friends. I wasn’t part of that era of waiting in line with a group of people, but where you shopped defined your friend group and met like-minded people at a store.

This current 10,000-square-foot space is probably more successful than I am currently financially. But it leads to much room to grow, inspires me to grow, inspires creativity, and encourages brand partnerships. I’m always trying to shoot bigger than I am.