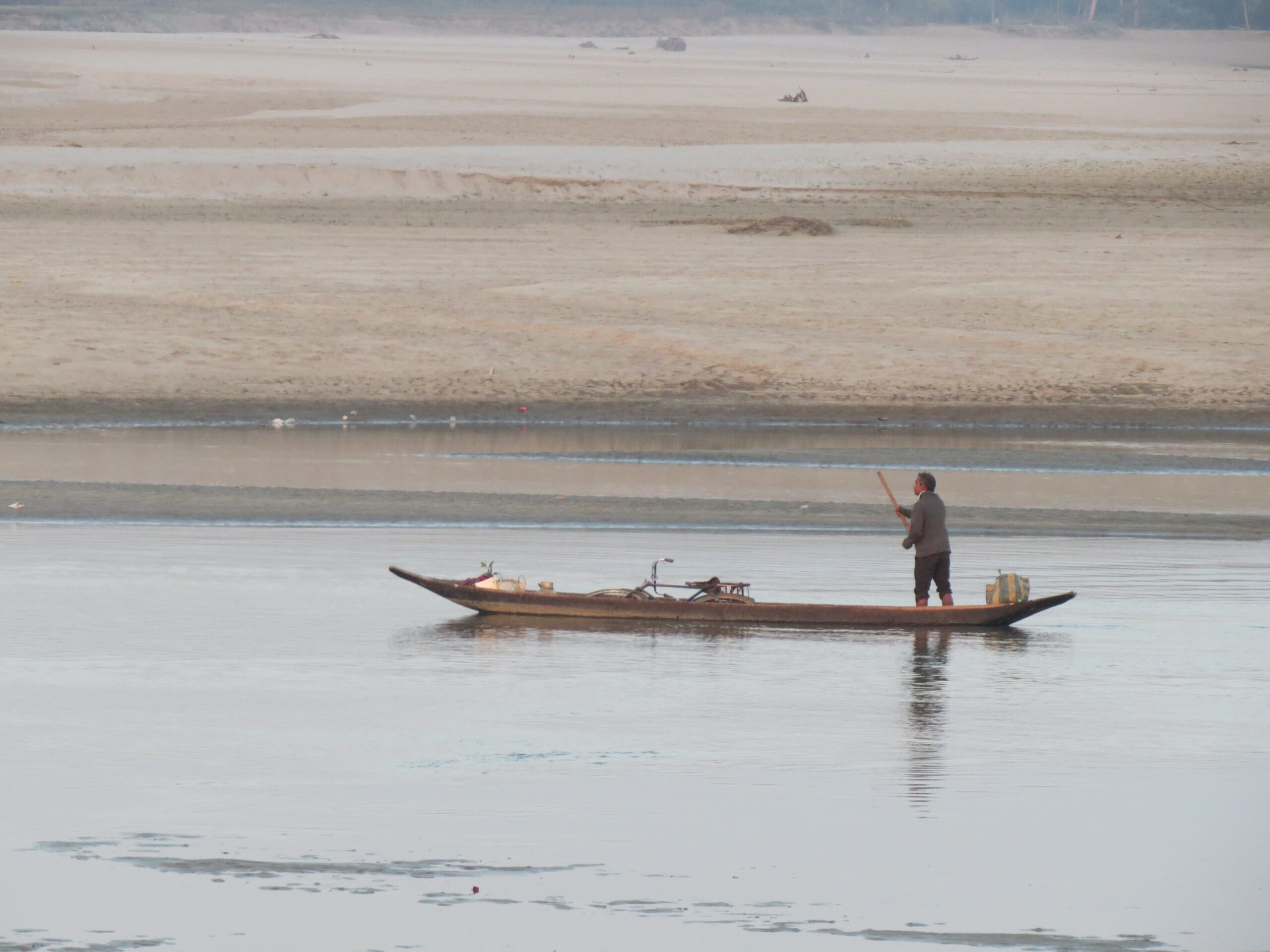 The Brahmaputra River is the 9th most powerful in the world. Its origins are in the Himalayas, where a Tibetan mountain glacier sources it. Water carves the landscape as it moves east and then southwest through Asia. Once it enters India, the Brahmaputra separates into a kaleidoscope of braids. These flows ribbon the eastern state of Assam, creating one of its most iconic features; Majuli Island.

Majuli is the largest riparian island in the world, and people have settled there for centuries. It currently boasts a population of over 100,000. Like many islands, it faces challenges due to anthropocentric climate change. Upstream development of flood barriers has intensified the rivers’ flow around Majuli’s’ shores. Increased flow has washed away sediments and shrunk the island. This problem is compounded by deforestation, wherein trees are cleared to create farmland. Externally and internally, the banks of the Majuli were being whittled away. Until resident Jadav Payeng began planting a forest.

Jadav has become an international conservation icon for his work on Majuli. It was spurred some 40 years ago when he witnessed a mass die-off of snakes during a drought. Extreme heat and lack of vegetation on Majuli led to the snakes baking under the sun. So disturbed by the scene, Jadav began planting bamboo to offer shade. He sprouted past bamboo to seeds and saplings, which became trees. The trees together became a forest, and the forest became an ecosystem. It has now been designated a reserve and bears Jadav’s middle name, Molai.

Molai Forest is an island paradise, even though it is not in the tropics. Elephants use it as calving grounds. Birds use it as nesting grounds. Tigers use it as hunting grounds. Its isolation probably helps, too. The Brahmaputra can be a fierce river that is difficult to cross. Elephants are the best swimmers of all terrestrial mammals and have seized it as their own. Tigers, too, are good swimmers and noble predators. Birds fly across water barriers easily.

Majuli as a sanctuary

Somehow rhinos have settled in Molai Forest, too. It was confirmed to the Forest Department when they seized a poacher’s kill. Coincidentally, this was the same day that Jadav received an award honoring his work from the President of India. He had been trying to tell officials that rhinos need protection on Majuli Island. This mix of death and burgeoning conservation projects is a hallmark of the environmental movement. All too often, it seems that problems are not taken seriously until catastrophe strikes.

The exact location of Majuli might be a factor in its success as a sanctuary. The state of Assam is disconnected from the rest of Peninsular India by the Siliguri Corridor. This narrow passageway is the result of geopolitical bargaining over the decades. Its isolation from the majority, settled in the Brahmaputra’s gorges between plains, mountains, and plateaus, mirrors the island isolation of Majuli. It offers a chance to create something new. Jadav jumped at this opportunity and grew his own forest. In doing so, he preserved the seclusion. This subtropical haven now stands as a testament to human solutions to the human problems forcing climate change.

Environmental activist and Founder of the Indigenous People’s Justice Forum, Rituraj Phukan, spoke to Jadav Payeng in the following exclusive interview for Rain.

Tell me about your first encounter with the sandbar when you were 16. To my understanding, this sandbar had been abandoned in 1983. What was the history of this land, and how did you create a forest?

When the great flood of 1979 happened, a lot of garbage was washed down from faraway lands, some say even from China and Arunachal Pradesh. Much of this garbage was washed up on the dry sandbar near our home. I found hundreds of dead snakes in the sand. I was distraught and saddened by the plight of these reptiles. I realized that the extreme heat during that year and the lack of vegetation was the reason for the painful death of the snakes. This incident spurred me to take up the plantation and create the forest.

I read that 100 elephants come to the forest and stay for six months and have even given birth to calves. This must mean these conscious animals feel safe here. Why do you think animals have responded so well to the forest?

Whenever it is time to give birth, the elephants come and stay in the forest for 3 or 4 months. Herds of around 150 elephants can find adequate food during their stay and leave only when the grass is all eaten. The elephants probably feel safer there as the forest is highland, compared to most areas of protected areas like the Kaziranga and Dibru Saikhowa.

Did you have an overall design of the forest?

The forest is a result of planting one sapling after the other; I followed whatever idea I had in my mind while planting to make the area beautiful. The tree’s beauty and natural design make the forest what it is today.

Do you have a favorite area of the forest? Can you describe it to us?

The first sapling I planted is among my favorites, and so is the area where it stands. Although I first planted bamboo on the sandbar, this particle tree grew from a small sapling I found growing on a large dry trunk that floated down the Brahmaputra. That sapling has now grown so big… and therefore, I am very fond of the tree.

What challenges do you see ahead for the forest and the earth?

The forest is the only one not touched by today’s technologies. People from all over the world have embraced it and the thrill of the long walk to reach the forest itself is unique. The challenge will be to keep natural areas on earth safe for all in the future.

What is the most incredible encounter you’ve had in the forest?

Every encounter is memorable, whether it is the deer running across the path, elephants ransacking my cowshed, or finding tiger pug marks on the riverbank. If you talk about incredible encounters, it happened while I was away, so it was not really an encounter.

In 2012, on the 1st of August, I was awarded an award by the late President of India, Bharat Ratna A.P.J. Abdul Kalam, in Mumbai. That same day, a rhino was killed in my forest, and finally, the people, including the forest department, were convinced that there were rhinos at Molaikathoni. I had asked for forest staff to be allocated to protect the rhinos, but the poaching in my absence and the media attention to my award was something extraordinary.

How do you think individuals who may live in dense cities with limited nature become in touch again with nature and the earth?

People who live in the concrete jungle will have to return to nature. Covid19 was a warning for people who lived all their lives in these concrete cities, far removed from nature. I hope people will now realize the importance of the natural world and discover how they can contribute to making a better planet.

Many have tried to encroach upon this project, even rhinoceros hunters. Can you tell us about some of your struggles over the years to ensure its success and preservation?

The challenges are poaching and encroachment. Even before the 2012 incident of poaching, I came face to face with poachers. I informed the forest department for protection. Then in August 2012, poachers killed a rhino inside the forest. The people must protect the forest and the responsible government agencies.

As we look more expansive at the natural habitats and forests of the earth, we see a devastating story. What would you ask readers to take from your life’s journey of reforestation?

Although forests may seem the same, there are differences between this forest and others. Most forests are very old and have grown independently with the help of the birds and animals that inhabit them. This forest has grown on a barren sandbar, and efforts continue to expand the forest until now. I feel this is a good example of reforestation, with excellent habitat for varieties of wild birds and animals. Many areas in Assam and all over India are either barren or degraded open areas suitable for reforestation. My only wish is that everyone steps forward to contribute to reforestation efforts in their respective regions.