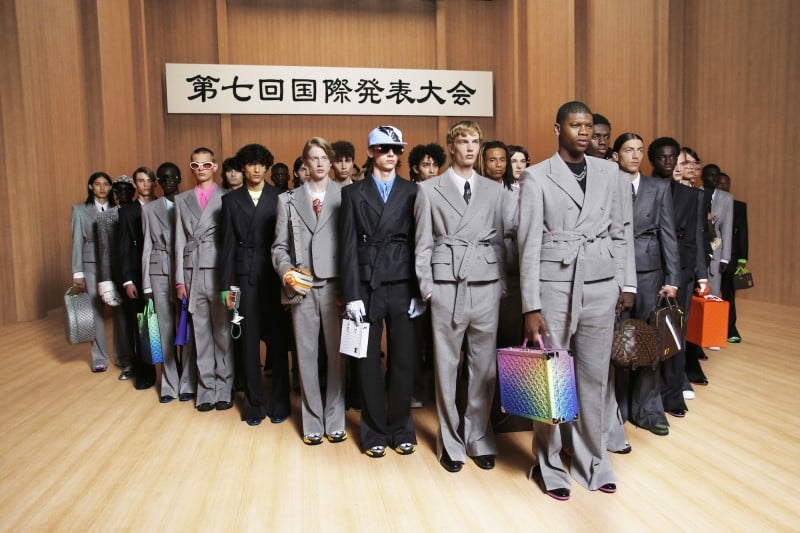 In a valiant effort to peel back the influences of the past fifty years in music, Artistic Director of Louis Vuitton Men, Virgil Abloh, presents the Men Spring/Summer 2022 collection. Taking the track, Amen Break, as a starting point, Abloh explores the myriad ways this little known b-side track from the funk-soul group, The Winstons, has influenced pop music (the six-second drum beat is one of the most sampled pieces of music). This becomes a metaphor for “the myth of ownership in contemporary creativity,” a well known design philosophy for Abloh from day one.

Abloh goes on to point out the roots of rave music in the late 80s underground house and nightlife scenes of Detroit and Chicago. These were predominantly queer and black spaces that would eventually cross-pollinate across the Atlantic to British nightlife and the dance parties of Ibiza. The collection goes on to deconstruct ideas in the way we dress: suit vs. tracksuit, day job vs. night job, street vs. formal are just a few of the dichotomies that are mentioned.

Turning to the collection itself, we see the emergence of a baroque streetwear aesthetic. Previous Abloh designs are resampled into new motifs while a solid new silhouette emerges for the brand. A burst of color, melange, and trippy designs blend into a mishmash of sportswear, formal attire, and streetwear. Iconic silhouettes from other past men’s lines from the likes of Y/Project, Givenchy, Richard Quinn, Balenciaga, Calvin Klein 205W39NYC, and many more are unapologetically reinterpreted through the dual lens of Abloh and Louis Vuitton. While it’s no secret post-modernism has been engaged in this ritual on the catwalk for some time now, this collection is unique in drawing such extreme exaggerations and by marching parallel to the overlooked influence of black and queer music on contemporary pop culture.

This so-called remix of the past and present as a means to change the future is what Abloh does best and with this collection he seems to have found his footing. This “never-ending loop” surely reaches a fever pitch for Spring/Summer 2022. One has to wonder, however, what significance it will have on not only his own future collections but for the industry at large. If we are to endlessly resample without regard to ownership, and we recycle to the point where references become obscured or unidentifiable, what expectations can we have for originality in the future?

Explore the full collection and film below, courtesy of Louis Vuitton.