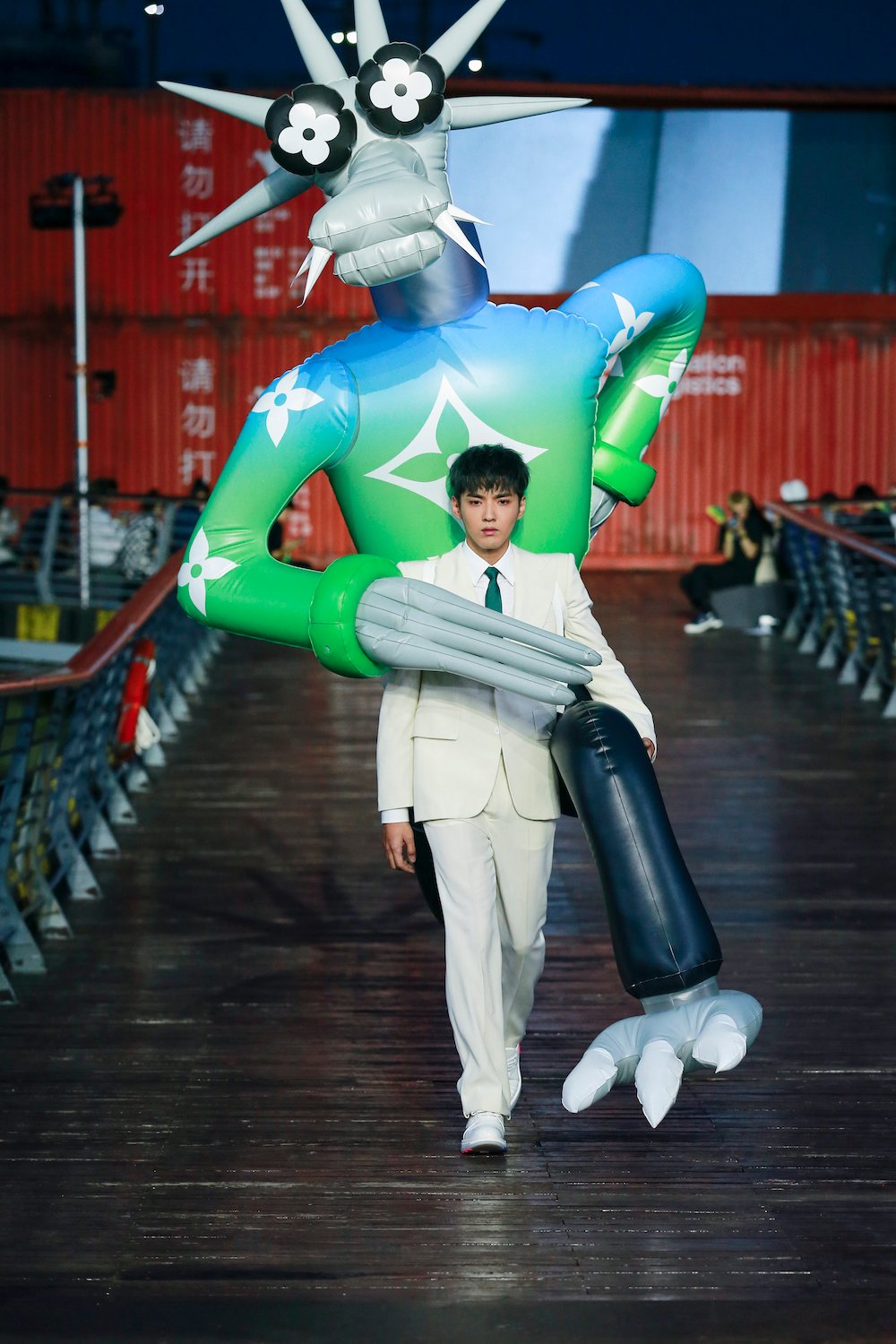 Artistic director for Louis Vuitton, Virgil Abloh, presents the men’s spring/summer 2021 show, “Message in a Bottle,” in Shanghai. ‘The adventures of Zoooom with friends,’ the imaginative animated short film we caught a glimpse of last month, opened the show. After exploring Paris, the psychedelic bunch traveled to Shanghai where they came to life as giant blown up balloon figures in and alongside the runway.

Reading through Abloh’s manifesto for the collection, an homage to how many artistic movements began in the 20th Century, we are asked to focus on Abloh’s attention to nuance. A bit cryptic at times, the manifesto outlines his ideals and ambitions for his next chapter at Louis Vuitton. It is one that reads deeper than shortsighted activism and more as a manifesto for substantive change for a global culture informed by unity rather than the antiquated idea of tolerance. Abloh seems to acknowledge progress takes time, the up-cycling of ideas and past collections as he calls it, and he sees himself as a critical voice for this change for fashion and beyond.

A quote from the manifesto reads:

“I use these images to trick the spectator’s preconceived ideas, overwrite embedded race associations, and tackle prejudice on a subconscious level. I would like it to serve as a Trojan horse for the mind.”

There’s a lot to unpack here and if we have to go under hypnosis into the realm of psychedelia to get the subliminal message, then we’re all for it. It is after all the ultimate escape for answers to questions we can’t answer on this plane.

The show itself had many new arrangements of bold color blocking and styling combinations that were unexpected. The classic Louis Vuitton check pattern, traditionally stamped on luggage, was reapplied to ready-to-wear as a black and white check. It was then warped in some instances that of course ties back to the psychedelic challenge of perception alluded to in the manifesto.

Tartan patterns were reimagined as color television static…the gang of imaginary friends adorned the collection as figurines that hang off models like dæmons. Looking closely at the collection, it’s hard not to see the playful and otherworldly influence of Belgian menswear designer, Walter Van Beirendonck. Where Abloh departs is in his unique ability to apply his ideas to the streetwear silhouette, a liberating blank canvas for the progression of menswear.

I’ll leave you with Abloh’s closing remarks from his manifesto on his coming chapters at Louis Vuitton.

“As we collectively resurge, consider this my manifesto: as a presence of colour within the fashion establishment, I commit to inclusivity, unity, diversity, and individuality. I will continue to employ diverse candidates, financially support BIPOC and LGBTQ+ causes, shed light on businesses owned by BIPOC and LGBTQ+ individuals, work on public-facing initiatives that showcase BIPOC and LGBTQ+ role models, and assist organisations that promote more inclusive workforces. This is my invitation to move forward together with awareness, hope and determination. You are witnessing unapologetic Black Imagination on display.”

Explore the full collection and watch the show below, courtesy of Louis Vuitton.

Click on the individual images to display in a gallery.