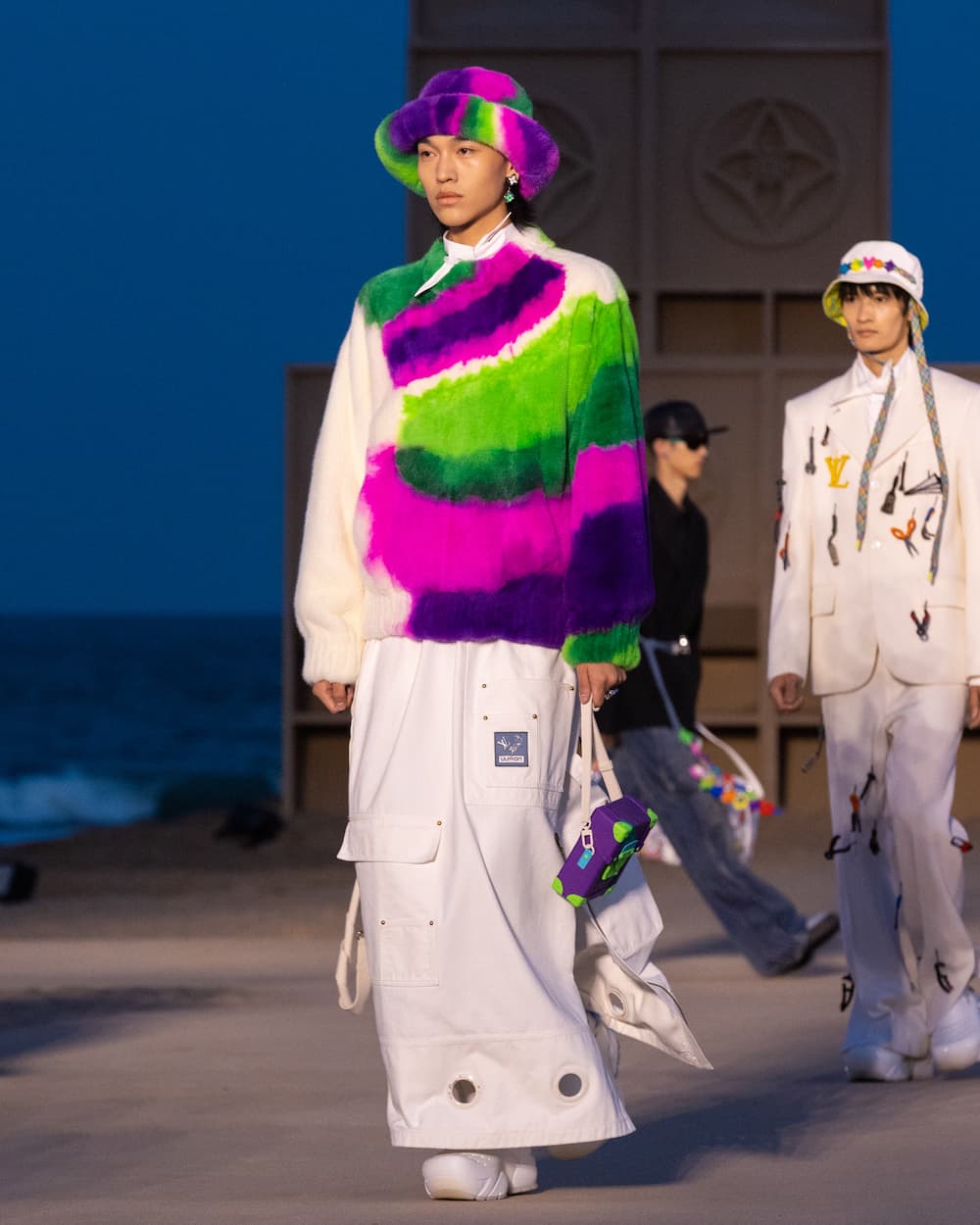 There are as many grains of sand on our planet as there are stars in the galaxy. Yet in the eyes of a child, the vastness of sand never poses an impossibility. It invites opportunity. In the sandbox and on the beach, children instinctively build sandcastles: constructs of the imagination that turn dreams into reality. For the Spring-Summer 2023 Spin-Off show in Aranya – designed by the Louis Vuitton Studio Prêt-à-Porter Homme – the Maison expands on the idea of the magnified playground first introduced in Paris in June. A cinematic prelude titled Mirage created in a collaborative effort between Chinese directors Jia Zhangke (producer of the prelude) and Wei Shujun (director of the prelude) – who also serve as directors of the show itself – portrays themes of childhood, discovery and community. Shot in the city of Dunhuang, on the edge of the Gobi Desert – once a frontier garrison on the Silk Road – the film stages a contemporary meeting between East and West reflected in the poetry of history. The story takes its audiences to Aranya beach where the live show unfolds in a sandscape moulded with the tools at the root of a collection founded in the infinite possibilities of craftsmanship. Live-scored by the Beijing-based instrumental band Sleeping Dogs, the show features a performance choreographed by the Chinese dancer Hou Ying.

Imagination is at the heart of Louis Vuitton. A visual manifestation of our hopes and ideas, it has the power to heal, regenerate and uplift us. The Spring-Summer 2023 Men’s Collection was conceived and created by the Louis Vuitton Studio Prêt-à-Porter Homme: an ever-evolving ecosystem of creative minds, who welcomed Virgil Abloh to the Maison in 2018 and expanded during his eight seasons of artistic direction. A living testament to his talent for bringing people together, they populate a creative playground more than a century in the making. At the timeless core of the Louis Vuitton studio is the belief that imagination – creatorship, craftsmanship, showmanship – can move and unite its spectators around the world. It’s the heritage on which Virgil Abloh based his practice at the Maison and the philosophy that continues to drive the Studio Prêt-à-Porter Homme. As a creative community who shared a monumental experience, they embrace the Spring-Summer 2023 Men’s Collection as a cathartic process: a proposal created in the spirit of all the human minds that shape Louis Vuitton.

Toys are tools for the imagination. The playthings we are given early in life become building blocks for dreams and aspirations. In the Carré du Louvre in June 2022, the Louis Vuitton Studio Prêt-à-Porter Homme imagined a magnified playground. Here, a giant children’s toy racetrack became a Yellow-Brick Road for the imagination: an evolutionary path for the mind where childlike fantasies come to life. It’s a transition from naïve to refined reflected in a collection that elevates the symbols of childhood through the savoir-faire of the Maison. The premise cuts a silhouette drawn from swoopy lines, which plays with shrunken and oversized dimensions founded in the idea of a wardrobe grown-into or outgrown, with rootsy nods to the 1990s dress code of the skater community. Iconography native to the playground adorns garments and accessories: origami paper planes, building block beading, playdough textures and tones, cartoon prints, and sandbox tool embellishments. Evoked within the pieces is an under-construction sensibility inherent to the toys found in a playground and to the process of growing.

Parade for the mind

Pageantry courses through the veins of Louis Vuitton. Over time, the custodians of the Maison have employed displays of wonderment to inspire unifying feelings of joy in its diverse audiences around the globe. On the magnified toy racetrack of the Spring-Summer 2023 Men’s Show in Paris in June, a parade of childhood dreams unfolded led by The Marching 100, the Tallahassee-based marching band of the Florida A&M University formed in 1946. Flags filled the space – their motifs reflective of the Louis Vuitton codes and values – as a representation of global communities created beyond borders and diversities. Elated by music, the soundtrack of the parade fused with the clothes themselves: two SpeakerMan looks integrated a number of wireless loudspeakers into backpacks, which connected to the show’s sound system. The constructions portrayed the togetherness of sound and the harmonious properties of speaker culture, while echoing the shared appreciation for loud music that exists within the Louis Vuitton Studio Prêt-à-Porter Homme – where every corner is occupied by a speaker.

A quintessential component in the genetics of Louis Vuitton, French romanticism fills the collection. Flower fields – the eternal image of harmony in diversity – grace garments through impressionist paintings transformed into tapestries and prints, while depictions of thistles appear in multiple fabric weaves, prints and embroideries. A symbol of resilience and healing folklorically used to overcome difficult situations, the prickly flower motifs also nod to the decor of Louis Vuitton’s ancestral home in Asnières where thistles often appear in bouquets. The delicate floral paintings found in the ceilings of the same residence echo the cornices that define the palatial interiors of Parisian architecture. A manifestation of our childhood dreams – fairy tales, majesty, whimsy – these moulures ornament moulded leather tailoring and bags, and feature in delicate lace garments. As a tribute to Paris, a photo montage collaging elements from the city and the Maison – the Pont Neuf, the Damier pattern, the cornices of interiors – runs through the collection.

The impulse to turn imagination into creation begins with the instruments of our childhood: toys, building blocks and the tools of the sandbox. As we grow and refine, so do the devices that bring our ideas to life. Through the savoir-faire integral to Louis Vuitton, the collection reflects on this transition in figurative and literal ways. Children’s building blocks and playdough elements adorn garments and accessories, while toolbox components – such as scissors, tweezers and clamps – embellish garments as three-dimensional embroidered pendants. The motifs celebrate the expert ateliers of the Maison, and serve as symbols of the painstaking savoir-faire that makes up the collection, from the development of fabrics to hand-embroideries, hand-beading, hand-crocheting, Shiburi tie-dye, and intricate leather moulding, as well as technological ingenuity like static electricity fabrics and SpeakerMan backpacks composed of genuine and 3D-printed loudspeakers.