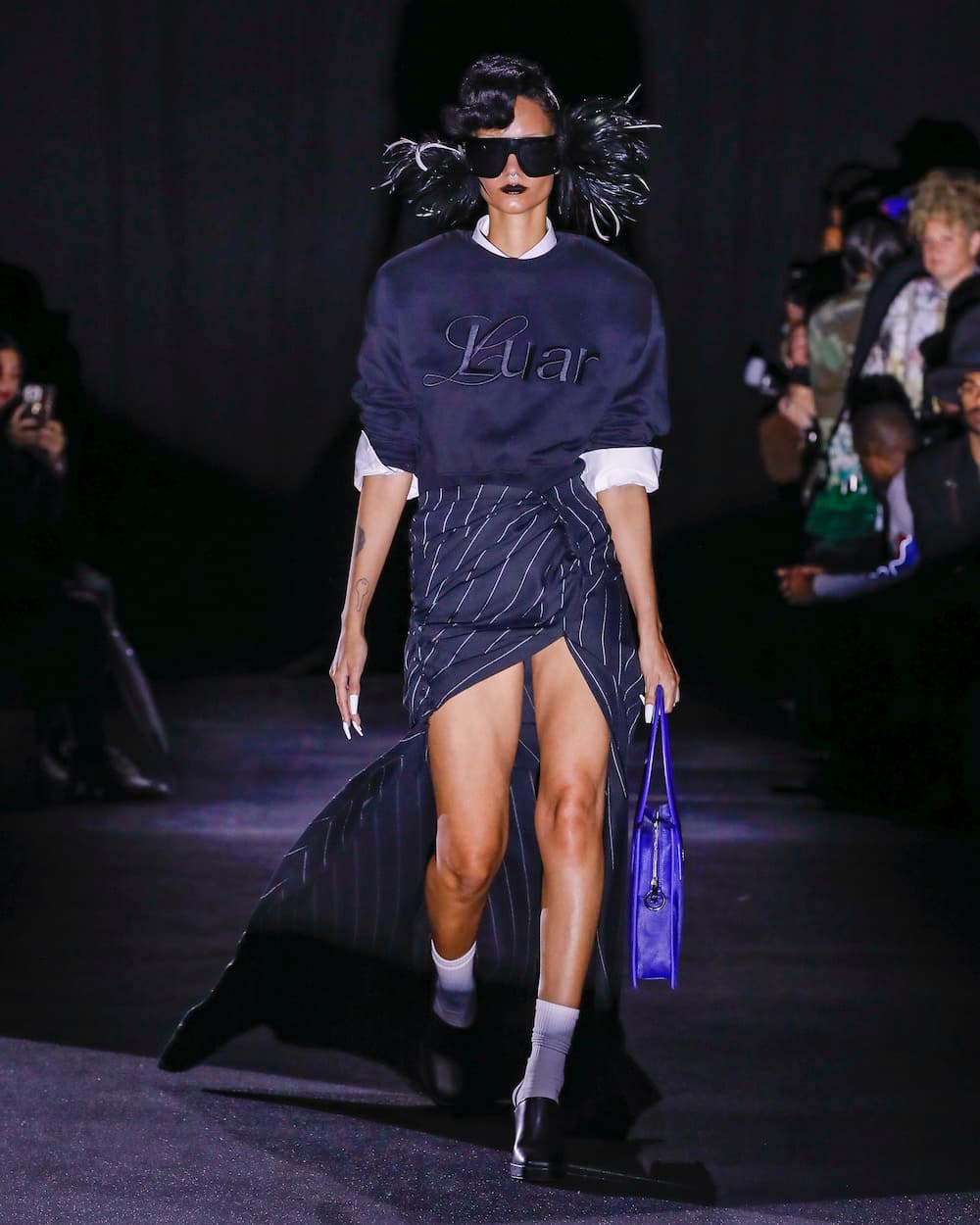 “POV: You are a young Raul Lopez, sitting cross-legged on the sofa in your family’s Brooklyn living room waiting for everyone to arrive at the family reunion. Your mom has insisted you button your starchy shirt all the way up and right about now, you understand why. Aunty SO AND SO just arrived, stomping the snow off her boots she goes to unzip her black puffer jacket next. The thick layers of nylon and down give way to a silky floor-length dress with crystal detailing, romantic frills at the hem, and a deep v-cut. You can’t help but gasp and sit up a little bit higher. As everyone else arrives carrying trays of food, you almost forget you’re hungry, waiting for the moment that the jackets come off to reveal the secret underneath. They float towards you with stars in their eyes, planting a kiss on your cheek as you think to yourself, oh, we eatin’ good tonight, devouring legacy in the form of looks.

Family reunions for a designer, Raul Lopez of LUAR, represent a literal representation of the nouveau riche reaching la alta gama (the high-end in Spanish) the theme of the designer’s Spring/Summer 2023 collection. With roots in the Dominican Republic, the women in Lopez’s family protected at all costs the American luxuries they had worked to acquire. The jackets were their armor but the minute that these layers were shed signaled not just arrival, but an inherent transformation. The juxtaposition of the two aesthetics intertwines symbolically for Lopez who has synthesized both high and low to form the DNA of LUAR. The brand’s visual language is one of nuance as Lopez codifies his experiences into narrative threads. Residual emotions become stitches and the fabric of what is formed is a wearable reflection of his community, their definitions of elegance, leisure, relaxation and this season, we’re talking luxury.

Designer this, designer that, as knock-offs fool the best of us (sometimes) and trends have turned individuals into thot-less clones, luxury for Lopez is more of a mindset than a logo. We gather here tonight to pay homage to the immigrant experience. As Lopez puts nylon tech jackets and chiffon gowns in conversation with each other, pairing leather and denim with silk in the same cadence, hidden in the proportions of exaggerated shapes is the notion of growing into oneself. The oversized shoulders reflect Lopez’s feeling as if he was carrying the world upon them as a gay, Latino male. The Stella Artois chalice holders reflect modern accommodations of memories shared over a beer with family. As validation nowadays comes in the form of viral-acclaim, LUAR instead looks in the mirror and sees itself reflected. LUAR is community and season after season the shows themselves have begun to feel like family reunions of their own making. For Lopez, they engender the same feelings.

For LUAR’s Spring/Summer 2023, Nike’s support to the brand included funding, production, footwear and promotion. Nike also provided LUAR with access to host their Spring/Summer 2023 runway show at Beyond The Court, a multi-day experience designed to inspire and engage Gen Z youth through sport and design. In celebration of Serena Williams’ sport and design legacy, Nike commissioned Luar to create a reimagined look from Serena’s career, which was displayed at Beyond The Court.