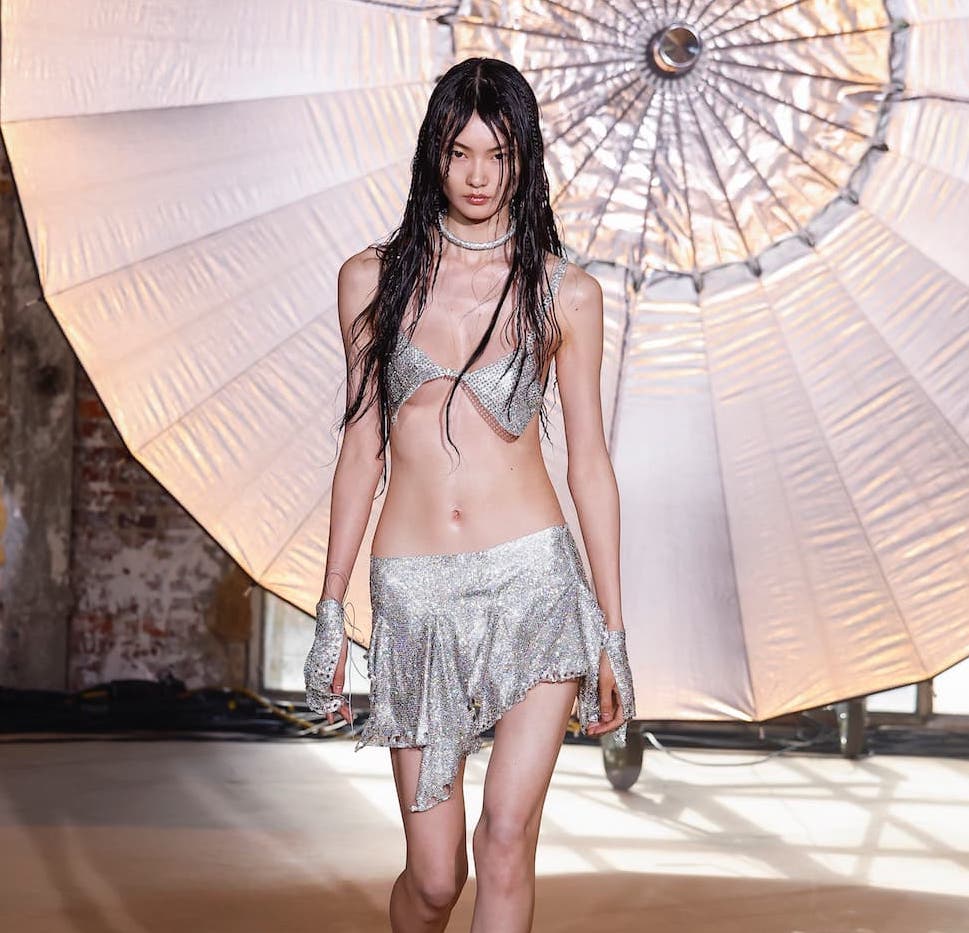 Ludovic de Saint Sernin takes SS23 as an opportunity to celebrate its fifth anniversary — to contemplate the succession of dreams come true that, in what feels like the blink of an eye, have seen the business grow from an upstart label into a proud young fashion house. Looking at where the journey thus far has brought the brand, it almost feels more like a dream than reality – like an exquisite mirage.

Here, this mirage is brought to life. A no-holds-barred expression of the spirit of fantasy at Ludovic de Saint Sernin’s core, perennial references are reinterpreted and now-unmistakable codes are reiterated.

Robert Mapplethorpe – one of the brand’s namesake designer’s earliest and most enduring conceptual touchpoints – is paid due homage in the collection’s opening look: a crisp white shirt worn with slim, side-laced black leather trousers. Scarlet anthuriums echo the poetic timbre of his botanical photography, while cropped pleated skirts, shorts, and shirts in black calfskin nod to the raw, queer sexuality of his most acclaimed work.

Drawing upon the designer’s recent time spent in Berlin’s cavernous temples of hedonism, last season’s LdSS raver slips into slinky stretch leather tanktops and biker shorts in matte black and distressed taupe, wearing them with color co-ordinated knee-high boots – a continuation of the brand’s longstanding collaboration with Italian shoemaker Piferi. A bold new skirt silhouette draws inspiration from the a-line miniskirts seen on musclebound boys at techno parties the world over, featuring a signature lace-fly, slashed box pleats, and a frilled hem. Available in micro, mini, and maxi lengths, this keystone piece comes in brown, khaki, blush, and blue denim, each styled with a complementing boot.

The introduction of new LdSS icons is met with a celebration of familiar ones. The original Eyelet Brief – the brand’s undeniable signature – is interpreted in denim, leather and swim knits. Frill-hemmed belts – or ultra-miniskirts, if you will – frame the emblematic piece, while a range of cotton underwear with crystal-strewn hems broadens access to the LdSS underwear universe. Elsewhere, its distinct silhouette and bowtie details inform the Cleavage bag, a sleek leather baguette wearable both on the shoulder and across the body. Here, it appears in finishes spanning silver python-effect and polished black calfskin; blush, and brown croc-embossed leather.

More than just an anniversary

This collection celebrates the artisanal skills that Ludovic de Saint Sernin has cultivated in its rapidly growing atelier. Denim pieces, in particular, illustrate the painstaking attention-to-detail invested in the making of each piece, with laddered denim shorts created using a method that sees the weft threads of the cloth removed one by one, with similarly delicate techniques resulting in the fine stripes of a lace-up jacket, as well as the ‘fur’ found at its collar and cuffs.

Asymmetrically draped miniskirts and bralettes are crafted using high-grade crystal mesh, kindly sponsored by Swarovski. A testament to the atelier’s savoir-faire, hand-picked grid patterns of varying gauges pepper each shimmering garment, while skirts are constructed with built-in fluid volumes that swish and flicker when worn.

To celebrate the collaborative relationship between Ludovic de Saint Sernin and Swarovs- ki, on Monday 3rd October 2023, a week-long presentation of the most iconic LdSS crystal pieces produced to date – and the collection’s full set of looks – will be held at the Austrian jeweler’s Champs Elysées flagship. Open to all, it will allow the brand’s community to come together and toast the dreams achieved over the past five years, and the many more to be realized over the years to come.