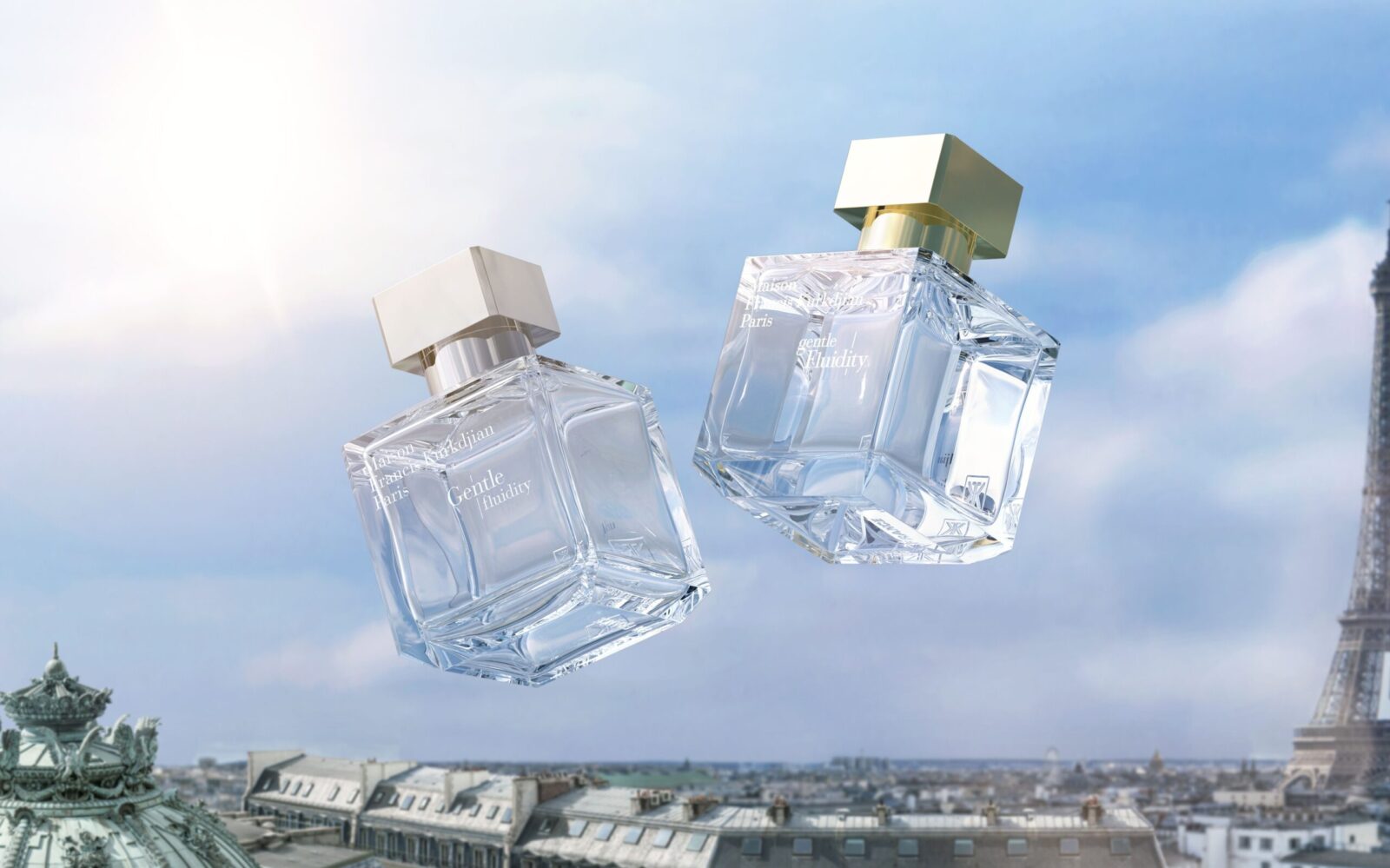 Master perfumer Francis Kurkdjian, interviewed in a special feature for RAIN Spring/Summer 2018, print edition, just released two new incredible fragrances into the line, Gentle Fluidity. Although, they are each composed of the same 49 ingredients, they reveal vastly different olfactory worlds within each. This is because Kurkdjian has worked meticulously to tweak and perfect the ratios and measurements between the two, bringing up many questions about the traditional his or hers fragrance. Read more below and watch the 3D film by Hugo Arcier and the Maison. Make sure to stop by a beautiful Maison Francis Kurkdjian shop or select retailer near you to experience Gentle Fluidity for yourself. Images and text, courtesy of Celine Kaplan PR.

As a keen observer of society and its evolution, Francis Kurkdjian mirrors his era by telling stories through fragrance. Gentle Fluidity is his answer to contemporary questions on gender identity. “Gentle” because benevolence is one of Maison Francis Kurkdjian core values. “Fluidity” because we are all free to express our personality without having to submit to diktats, just like the Maison has unlimited creative freedom. Gentle Fluidity is the name of two new eau de parfum created by our in-house perfumer. A single name for two distinct olfactory identities. The same name shared by two creations whose distinctive feature is to be composed of the same ingredients.

When Francis Kurkdjian is asked how long it takes him to create a new perfume, he usually mentions the number of years that have passed since the beginning of his career. Twenty five years. For twenty five years he has molded olfactory matter and highlighted its visible and invisible facets. Once again Francis Kurkdjian disrupts the rules of fragrance creation with a disconcerting composition exercise. With Gentle Fluidity, he unveils two eau de parfum from two utterly different olfactory worlds (one features a woody, aromatic scent, the other musky, oriental notes), by drawing from the same list of ingredients and going beyond the concept of perfumery for women, men or mixed. When he overdoses some ingredients, he under doses others because fragrances, like all the things that move us, are essentially about balance and expected effects… No more feminine or masculine. There is a personality, a sensitivity, a “Gentle Fluidity” between all gender identities.

Subtlety and balance throughout

In order to visually tell these two creations apart, a special role was given to the color of the name and the cap and to the balance of letters. Silver for an aromatic woody “Gentle fluidity” featuring a big G, gold for the oriental musky interpretation where the F is in capital letters, like in “gentle Fluidity”. Fragrance composition remains a broad topic. When Francis Kurkdjian conjures up a new fragrance, he follows a golden rule: to use only the quantity of ingredients needed to convey an idea and arouse emotion.

Of the 49 ingredients used to compose this perfume duo, Francis Kurkdjian wished to highlight six which make up the olfactory silhouette of each of the two variations: juniper berry, nutmeg and coriander seed essences, musks, ambery woods and vanilla. In their own way, these two eau de parfum become comfortable and reassuring. In gentle Fluidity’s (gold) generous, enveloping trail, we can find coriander seed essence and an overdose of musks and vanilla. The floral, spicy note of coriander seeds brings, just like musks, ethereal volume and a lingering trail. In the base notes, the gourmand, reassuring notes of the vanilla accord enhanced by the ambery woods reveal a radiant, bright silhouette.

In Gentle fluidity (silver), nutmeg and ambery woods are dominant and release a vibrant, comfortable trail. As for juniper berry essence, it leads to an ascending, ultra-fresh, aromatic note, similar to a “gin frappé” effect, balanced by the dry, slightly balmy, spicy notes of nutmeg. The base notes reveal ambery wood facets ranging from sweet and enveloping to powerful and dry.

Since the creation of Maison Francis Kurkdjian, which they cofounded in September 2009, Francis Kurkdjian and Marc Chaya, its CEO, have worked closely together on its development and the overall artistic direction. Although most fields of expertise can be found in-house, they sometimes call on external talents, whose creativity and sensitivity match those of the Maison.

To celebrate the launch of this new perfume duo, a 3D film by Hugo Arcier features Francis Kurkdjian’s office. Arcier, a digital artist, replaces or covers virtual as well as reality. Cyril Teste is another talented person Francis Kurkdjian had already worked with in the past. This producer, who was responsible for film performances, collaborated as an artistic advisor. Finally, the music composition was once again assigned to Yannick Kalfayan, whose first creations for the Maison date back to 2015.