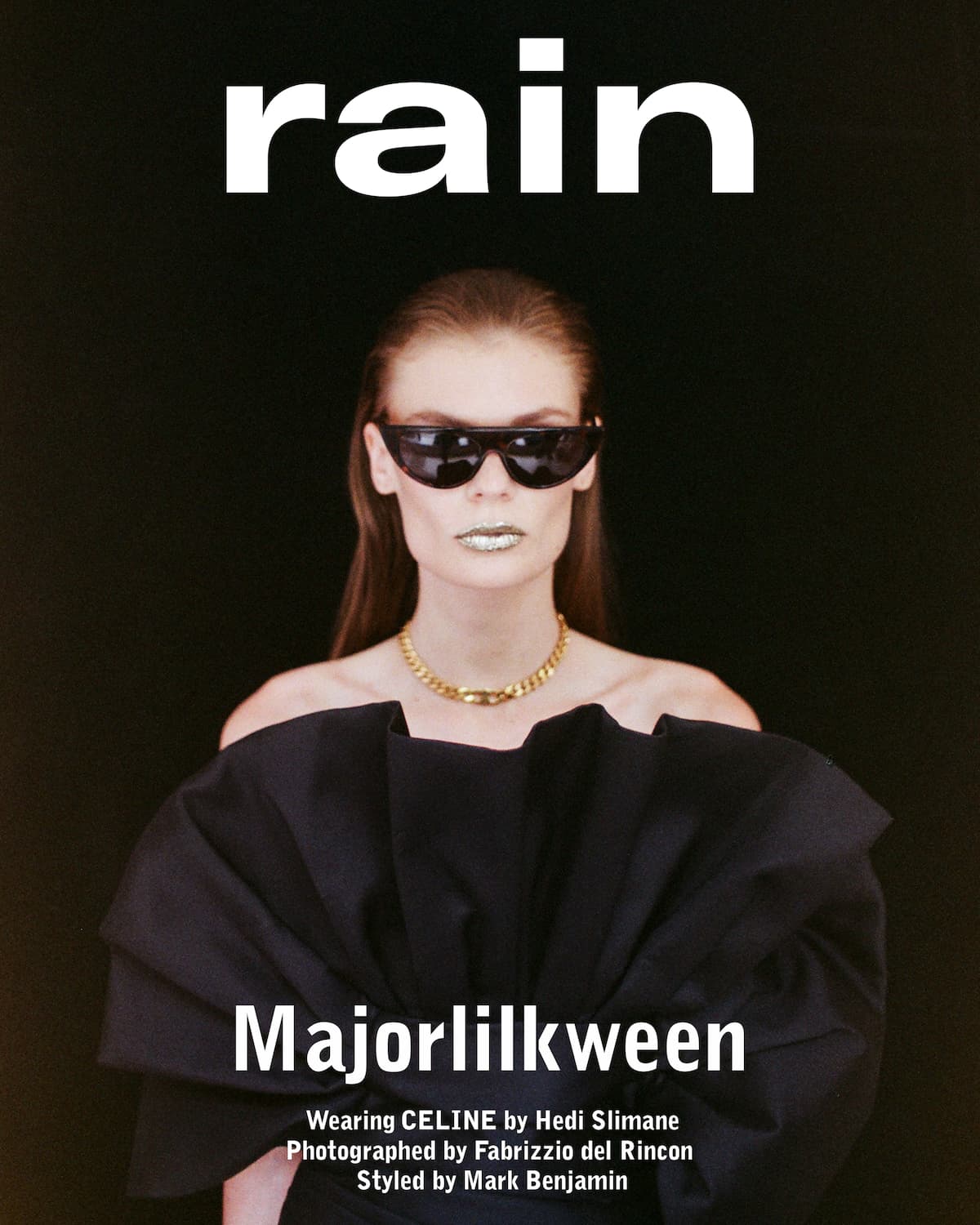 Majorlilkween (Alex Ljadov) brings fashion and art together through her music. Her latest accomplishment, the music video “Rogue,” is an empowering statement on diversity, inclusion, and claiming independence. Rain caught up with Majorlilkween in an exclusive photoshoot and interview.

When was the first moment you decided to become Majorlilkween?

The persona was born in Vancouver. I was there to shoot a short film for models.com. I met a girl there I had matched with on Tinder six months prior. We were supposed to go on a date. We never did. She was a photographer; her mom is a famous opera singer in China. She picked me up at the airport in a limo, mad extra, to go to her house. In the limo, she asked, ‘oh, you don’t have a Finsta. And I’m like, what’s a Finsta?’ She helped me make one, and I was like, ‘what’s my username?’

She was like, ‘well, you should name it little queen or something because that’s what you are.’ And I was like, ‘oh, it’s major little queen.’ It’s a bit satire, a bit fashion; everybody in fashion always says, ‘oh my God, that’s major.’ That’s how the Instagram page was born.

I always was an artistic kid growing up. I performed for my parents and put on shows; I was in a choir and school plays, recreating Nicki Minaj and Britney Spears’ music videos.

People suggested rap names when I decided to record music, and I wasn’t vibing with any. I feel I’m the type of person who needs to feel the identity. My real name is Alex; it’s so common that it wouldn’t have worked. I went with Majorlilkween since she was already alive. This persona is extra and pops out in wild looks.

Majorlilkween is everything that Alex is not allowed to be because she has no fear and doesn’t care about other people’s judgments. In my everyday life, I wear sweats and stuff; I blend in, have anxiety, and don’t want to be the center of attention. I can express my other side through my artistic personality, which is a part of me and is me. I like to have a balance.

You mentioned Nicki Minaj and Britney Spears. Are they your musical idols?

For sure. I grew up listening to them. I love the pop star power of Britney: the dancing, the choreography, the hair flips. Then from Nicki, the bars, different genres that she bounces in between and the crazy looks, the wigs, the costumes, the drama, you know? Those two combined formed my inner star personality. Majorlilkween is like Doja Cat meets Grimes meets Britney Spears with a sprinkle of Nicki.

For your first music video, ‘VirgHo,’ I couldn’t believe you had a helicopter as an independent artist. I was impressed by your commitment.

I never take on a project that I’m not committed to. I kept putting in the work behind the scenes. I would drop a song every six months once I started. I got the right people’s attention and put me in a direction where I got a feature with Flipp Dinero. From there, it was foot on the pedal, full speed on the highway.

Do you think the hustle of the fashion industry prepared you for what you’ve done as Majorlilkween?

For sure. Modeling is complex, especially if you’re a young model starting out and on a global level doing all the shows and all the shoots. People don’t realize that it’s taxing and has its ups and downs. I did like 70 shows for multiple seasons; people don’t realize how hard it is. You have to be a strong person, and you have to want it bad and put in the work. You have to be patient. I am grateful to have had hard-working role models.

Everything will look different for each person, and we accept it and love it because everybody’s gorgeous in their way.

My mom worked three jobs at one point. My grandma had a career in the food industry. I had strong women to look up to who did their best. I figured, ‘okay, well, this is my path. This is what I have to do to become something.’ The women in my family made something from themselves. So that’s what I aspire to do as well. Going through fashion also taught me a rigorous work ethic. Now, as Majorlilkween, I have to stand out for myself.

As a model, you’re around all these highly creative people in fashion. Did it help you define your style?

I always had a creative style when I was a kid, pre-modeling. I painted rainbows on my face and wore jeans with a skirt on top, long a sleeved shirt with a tank top over it; very Y2K for that era. When I started modeling, I had to abandon my style, so I just wore all black because that’s what I thought I had to be to become a successful model.

I was always taking notes; I’m a very observant person. I was blessed to be around iconic creators. Now, as Majorlilkween, I can fully express myself however I want and can create all these characters. They’re all me, and I live the fantasies.

I’m drawn to the pink Barbie vibe, the green fairy, and the red devil aesthetic. Those are the three paramount looks I rotate in between, but I always sprinkle in something new. People’s attention span is so short that they always want to see what’s next. That’s why they love Doja Cat because she always gives something different.

I want to talk about your new music video ‘Rogue.’ It’s this Quarantino-like cinematic masterpiece and the culmination of Majorlilkween over the past few years.

How did the idea come about? What was your thinking behind the song?

‘Rogue’ is a culmination of my journey in entertainment, this confident woman I am now. The song is about overcoming your insecurities and being a boss bitch. No fucks are given, doing whatever makes you happy and realizing the power of being a woman and supporting and uplifting other women. That’s the idea. I knew I wanted to do a song with a female rapper. When people do it right, it’s so powerful.

The video’s message is me killing an insecure past version of myself to make room for a new, improved boss bitch. I’m naked at the end because it’s the barest vulnerable version of a person. I also needed to have a diverse image of strong women in the video. They’re proud of their sexuality and proud to use it to their advantage.

Finding Majorlilkween in this new light helped me find my confidence and put my past issues like self-harm to rest. I used to be self-conscious about my body, but everybody loves how the clothes fit on me when I show up to shoots as Majorlilkween. Everything will look different for each person, and we accept it and love it because everybody’s gorgeous in their way.

I feel real women should accept and love themselves because they are gorgeous. The image on social media is unrealistic. In ‘Rogue,’ there are all different shades and sizes of women, and it’s not airbrushed. It looks fucking beautiful and gorgeous. Everybody is a sexy bitch, and it’s empowering to feel represented.

How did you meet Bali Baby?

Yeah, Bali’s a big part of this record. I found out about her 2016 through a friend. Then I cast her to be in my shoot, and that’s how we connected. And throughout the years, we worked on a few things together, shoot-wise. She always gives a fierce aesthetic; she is a trendsetter. She was the first woman to go viral with her unique lullaby-style rap and then bounce between pop, rock & hip hop.

We always have the best time. It was so much fun. She was so nice to invite me to her show, too. We come together and support each other. We can do so much as a union together.

I believe girls have more fun. I think people are also impressed or surprised by your live show. It’s like a significant pop performance.

I want people to feel empowered, included, and inspired. That’s how I approach my shows; that’s what I want to experience. I do it to the scale I can now; hopefully, I’ll soon be on major, big stages. I want people to feel the energy, the love, feel like they’re included, and are here to have a good time, party, and get inspired. Anything is possible if you put your mind to it and work hard.

What would you tell somebody who’s looking up to you? Maybe someone who doesn’t know where to start?

Be yourself, and don’t be afraid to express your wildest dreams. Life is short. You have to go for it because nobody will go for it besides yourself.

Do you have a dream collab?

Princess Nokia is my dream collab in life. I would love to collaborate with Nicki, Cher, or Britney. With the different genres she navigates, Nokia is ahead of her time. She is one of those artists giving to us; every project is different and exciting.