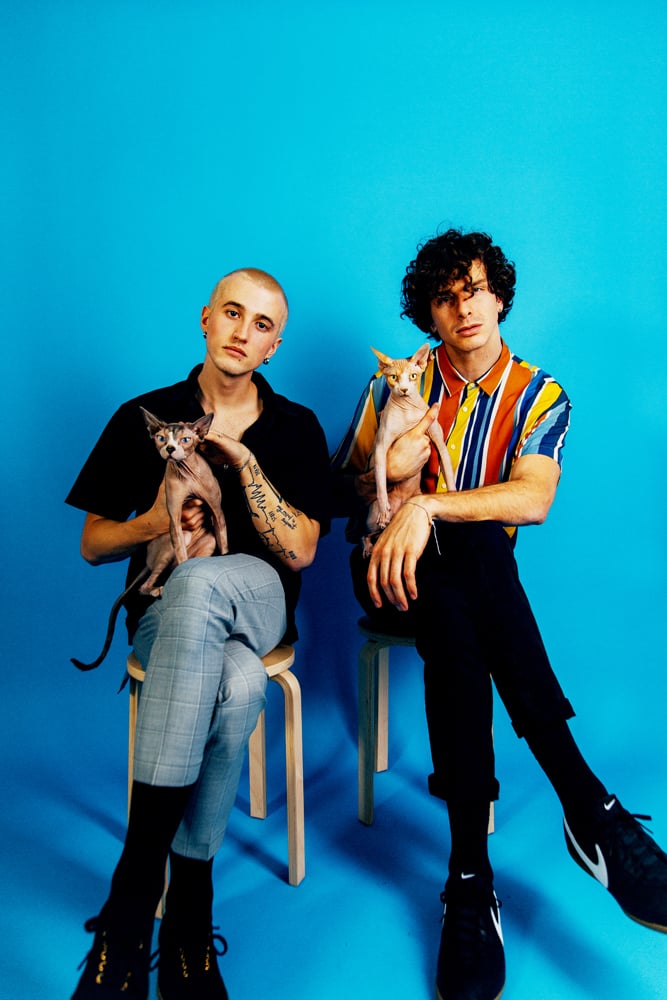 It’s not every day you come across a pop duo band singing about Yoko Ono and covering Lizzo’s “Truth Hurts” but then again nothing about Moby Rich is typical. The band is equal parts Maxwell Joseph and Connor Pledger. The two do everything together. Even their Instagram bio states, “we sing at the same time.” They play guitar at the same time too, though they do take turns ripping solos.

RAIN caught up with the talented new pop band at Republic Records on a rainy day in Manhattan. Maxwell is originally from Atlanta while Connor comes form Indianapolis. The two relocated to Los Angeles in 2015 where the eventually met, became best friends, and started writing music together.

Despite their accessible and euphoric sound, the two are serious musicians who have spent years songwriting. One fateful night at an open mic session at Crave Café in Studio City, the two were introduced by a mutual friend and the rest is history. They’ve since had a hit in 2018 titled “Yoko Ono” along with two EPs, aptly titled, Our First EP and Our First Second EP.

Their latest hit, and a personal favorite, “Loser,” is a modern day spin on Beck’s 90s hit song by the same name. They actually bumped into Beck at a party on the very night the song was released. I asked them how Beck’s loser is different from theirs. For Maxwell, “not much has changed. I think kids nowadays have great self-awareness with the internet because of the amount of information they have access to. Growing up, I felt like I was a loser. I was quirky and I didn’t talk to anybody. I tried hard to be cool and like all these different things. But today as a kid with the internet, you have an alternative reality you can really dive into.”

Connor elaborates, “it’s interesting that we’re in an era where wearing the weird clothes, the lame clothes that nobody wants to wear, doing the things nobody wants to do like playing Dungeons and Dragons with your friends…we now do it on purpose or ironically.” He explains, “like when Macklemore’s song ‘Thrift Shop’ came out it was a pop culture revelation because we all go to thrift shops and buy and wear shitty clothes.”

“It’s cool to not get the brand-new designer shoes. Now you look at the fashion brands and they’re making ugly clothing to mimic thrift clothing. That’s why we wrote ‘Loser’ because we feel like it’s awesome to be a loser now. We also felt that enough in our lives and just know how much of goofballs we are. We catch ourselves saying like, ‘man we are freaking lame.’ Being cathartic in life and allowing yourself to cut some slack is important.”

Their lyrics are easier to pinpoint than their sound. Parallels have been made to early MGMT, The Chainsmokers, or the early makings of N.E.R.D., but perhaps a formative sound is where they feel most comfortable. I alluded to the covers they’ve done and the sarcastic yet heartfelt lyrics that find their way into many of their songs.

Connor explains, “we did start the band as kind of a joke in a sense because it was just fun for us. There was no seriousness about it. Only after people started caring about it…we almost went down a route of trying to be super serious and very moody. We decided after our first record, and our song ‘Oil Spill,’ that our color palette is going to be gray and dark blue. That’s it. But then we realized ‘that’s not us.’ It’s a part of us but when people come to our show they want to have a chance to release and feel like they’re part of a community.”

What about their influences? How did they carve out this unique sound in the echelons of pop? Maxwell “grew up listening to Dave Matthews, Bon Iver, and John Mayer,” while Connor listened to a lot of “Tom York from Radiohead and pure electronic music.” Those references make sense the more you explore their discography. I pressed them on their choice to cover songs like Lizzo’s “Truth Hurts” from their EP titled Songs We Didn’t Write.

“We made covers like Lizzo’s ‘Truth Hurts’ because we are totally into what it stands for about men in power that sometimes don’t stand up when it’s time to and sometimes they take advantage of power and we’re totally with her. It’s something that happens in our world and needs to be addressed. So we did it but decided not to change any of the lyrics because we don’t want to change the idea or the intent of the song.”

“We saw her perform at a party and she got the entire room jumping up and down…she’s awesome!” Maxwell added.

Check out music from Moby Rich in the stream below and their music videos on YouTube.