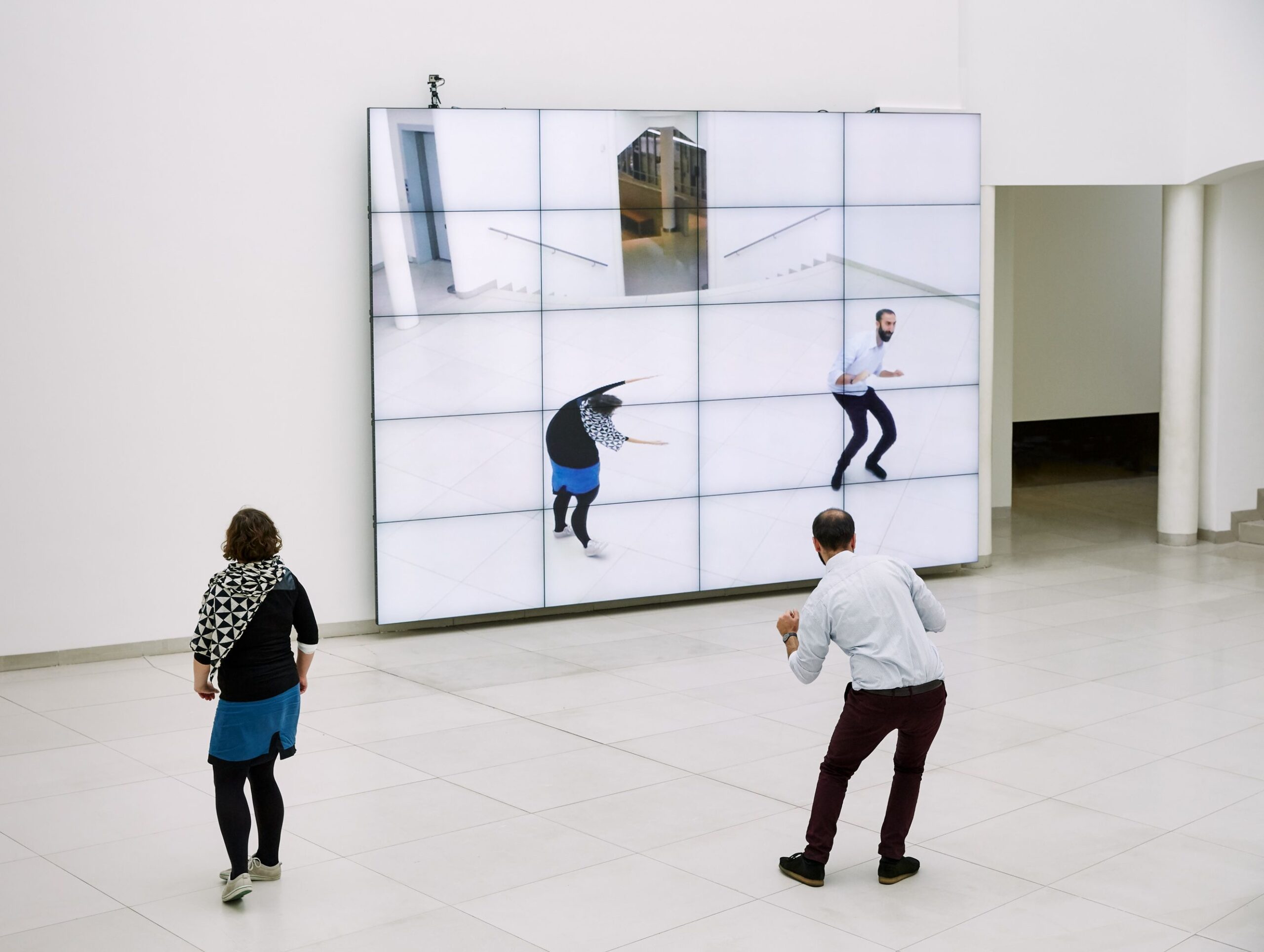 With an extensive repertoire in dance and choreography, William Forsythe’s artistic practice subtly explores the limits of space and time through poetic works like “Black Flags” (2014). For the past twenty years, Forsythe has created works combining choreography and the visual arts under the series title “choreographic objects.” Installed in the Mies van Der Rohe designed Cullinan Hall, the show creates an immersive dialogue between the audience and artistic gestures and objects. RAIN speaks with Alison de Lima Greene here on the show and the MFAH contemporary arts program.

MB: Hi Alison, I want to get your thoughts on the new William Forsythe show, “Choreographic Objects” and understand more about your perspective on the works. I should mention I’m from Houston actually and I have seen a few of your shows. I spent much of my free time between The Menil Collection and the MFAH.

AG: Well, when did you move to New York?

AG: So you moved right before we really started launching a new series of exhibitions here. You know we have that large central hall, the Cullinan Hall, which is a really beautiful Mies van der Rohe space. We have been spending the last few years inviting artists to do special installations for that space including Yayoi Kusama, Pipilotti Rist, and The Starn Brothers.

MB: I think the last show I saw there was Charles LeDray.

AG: That was a terrific traveling exhibition with literally thousands of objects surveying the artist’s career. But with the immersive environments, the focus is more intense. It’s typically a singular installation, one that invites you to immerse yourself deeply within a built environment, or a sound environment, or a light environment, or video.

AG: Of course, one of the most important aspects of these kinds of environments is how the artists are dealing with relational aesthetics. In other words, it’s a kind of active engagement that brings the viewers’ self-consciousness into play. Now, at the most trivial level, this is the kind of artwork that you can make a snapshot in front of, or a selfie. More importantly is how these all-encompassing environments change the viewer’s perception of the self in the space.

“I think it’s space, time and gravity. I think those are the three. . . These make up the scaffolding of William Forsythe’s work. A great deal of what he does has to do with how the forces of gravity dictate motion.”

AG: For example, the highlight of our Yayoi Kusama exhibition in 2016 was an installation titled Aftermath of Obliteration of Eternity. You stepped into a completely dark room and gradually, various pinpoints of light came on until you are surrounded by light, and then it vanishes again. That experience tells you a lot about Kusama’s ideas about the cycles of life and her wondrous grasp of the transcendent.

Aftermath was meant to only be experienced one or two people at a time. Other environments that we’ve done are more social, such as the light play created by Phillip Worthington in his Shadow Monsters, which was all the more effective when you had many people involved. William Forsythe, who is a choreographer, addresses both the singular viewer and multiple participants in his ongoing series of Choreographic Objects.

MB: I want to ask about that. I was trying to think of another artist that set out without the intent of becoming an artist. Forsythe is interesting because he started out in the performing arts and somehow very naturally ended up transitioning into the art world.

AG: There are dancers who have been very involved with the visual arts, like Martha Graham, Mark Morris, or Pina Bausch, all of whom have collaborated with painters and sculptors. However, none of those choreographers created artworks in the manner embraced by Forsythe. The dramaturge Robert Wilson comes closest in having a career that bridges the world of the stage and visual arts. And for Forsythe, the Choreographic Objects are not “ends” in themselves, they are a part of his larger practice, and he is still creating new ballets.

MB: It’s very interesting. I wasn’t so familiar with Forsythe’s work and I was trying to understand it, but of course you can get an idea from his videos on YouTube because it is relatable aesthetics…

MB: I grew up with a lot of mid-century artists and while there were moments of relational aesthetics like Felix Gonzalez-Torres with the candy and of course interactions with the audience like Dan Graham, it was almost exploring the relationship but not immersed in it. It’s very interesting to me. For me, it mostly comes down to space.

AG: Yes. It’s space, time and gravity. . . These make up the scaffolding of William Forsythe’s work. A great deal of what he does has to do with how the forces of gravity dictate motion. The major installation in Cullinan Hall is titled Nowhere and Everywhere at the Same Time No.2. It is made up of swinging plumb bobs, making the pull of gravity obvious.  What is less obvious is how people chose to move their bodies in response as they walk amidst these pendulums. Some make their way through the gallery slowly and thoughtfully, others enter the installation with a greater sense of play.

“[The technicians] were immediately impressed by our Mies van der Rohe building, and the installations complement the architecture beautifully, underscoring the spatial freedom offered by Mies’s galleries.”

AG: The sway of the pendulums has its own beauty and harmony as well. I was sitting in the exhibition yesterday with [Houston Chronicle art critic], Molly Glentzer, who is very involved with dance as well, and she said how much the swaying of the pendulums evokes the ebb and flow of tides. Looking at the strands that support the pendulums you might also think about how rain comes down. Indeed, despite the artificial environment of the museum, Forsythe encourages the viewer to think about organic life around us.

MB: What about some of the other works on display?

AG: There’s another very small piece that we have installed in the lobby titled Analogon. It is a video plinth in what looks like a waste basket, and it’s a sort of a surprise. You look in and you see a video showing strawberries in a basin as water is pouring in on one side. Under the pressure of the flow, strawberries move and dance around with the water currents. It’s a very, very simple video but absolutely delightful. And it’s actually not easy to count exactly how many strawberries are actually in the basin as they are always in motion.

Similarly, the work titled Towards the Diagnostic Gaze, is a boldly simple piece. There’s a granite shelf that’s inscribed: “hold the object absolutely still.” The object is an old fashioned feather duster. Everyone thinks that they have a steady hand, but no one’s hand is truly steady. If you have a pulse, if you’re breathing, the feathers will respond. It’s also a reminder that nothing living on this earth is absolutely still.

Finally, City of Abstracts turns everyone into a participant—it’s installed in our entrance and welcomes everyone into the museum. It is a video wall animated by motion capture technology. If you stand perfectly still in front of it, you see a perfectly normal image of yourself. You tap your foot, after about 5 seconds or so, your whole body starts to waver. If you sway back and forth, you turn into a snake. It’s really amazingly fun watching the small fry engage in this. The laughter that fills the museum is truly a delight.

Finally, for visitors who want to learn more about Forsythe, and to see him in motion, we have installed his Lectures from Improvisation Technologies video in the reading room of the Museum’s Hirsch Library. Subtitled A Tool for the Analytical Dance Eye, the video illustrates the essential geometry that underlies Forsythe’s choreography. Visitors can sit down with a pair of headphones and enjoy learning about the absolute discipline Forsythe brings to his work.

MB: Did Forsythe come to Houston?

AG: That wasn’t possible as he is preparing a new ballet. However, his colleague Julian Richter oversaw the installation, along with technicians Philip Bussmann, Max Schubert, and Sven Thöne. They have all worked with Forsythe very closely and understand not only how to install the work, but how to adapt each piece to the specific conditions of each new institution. They were immediately impressed by our Mies van der Rohe building, and the installations complement the architecture beautifully, underscoring the spatial freedom offered by Mies’s galleries.

MB: That’s the beauty of Houston, it has the space.

William Forsythe: Choreographic Objects is on display at the Museum of Fine Arts, Houston (MFAH) through September 15th.