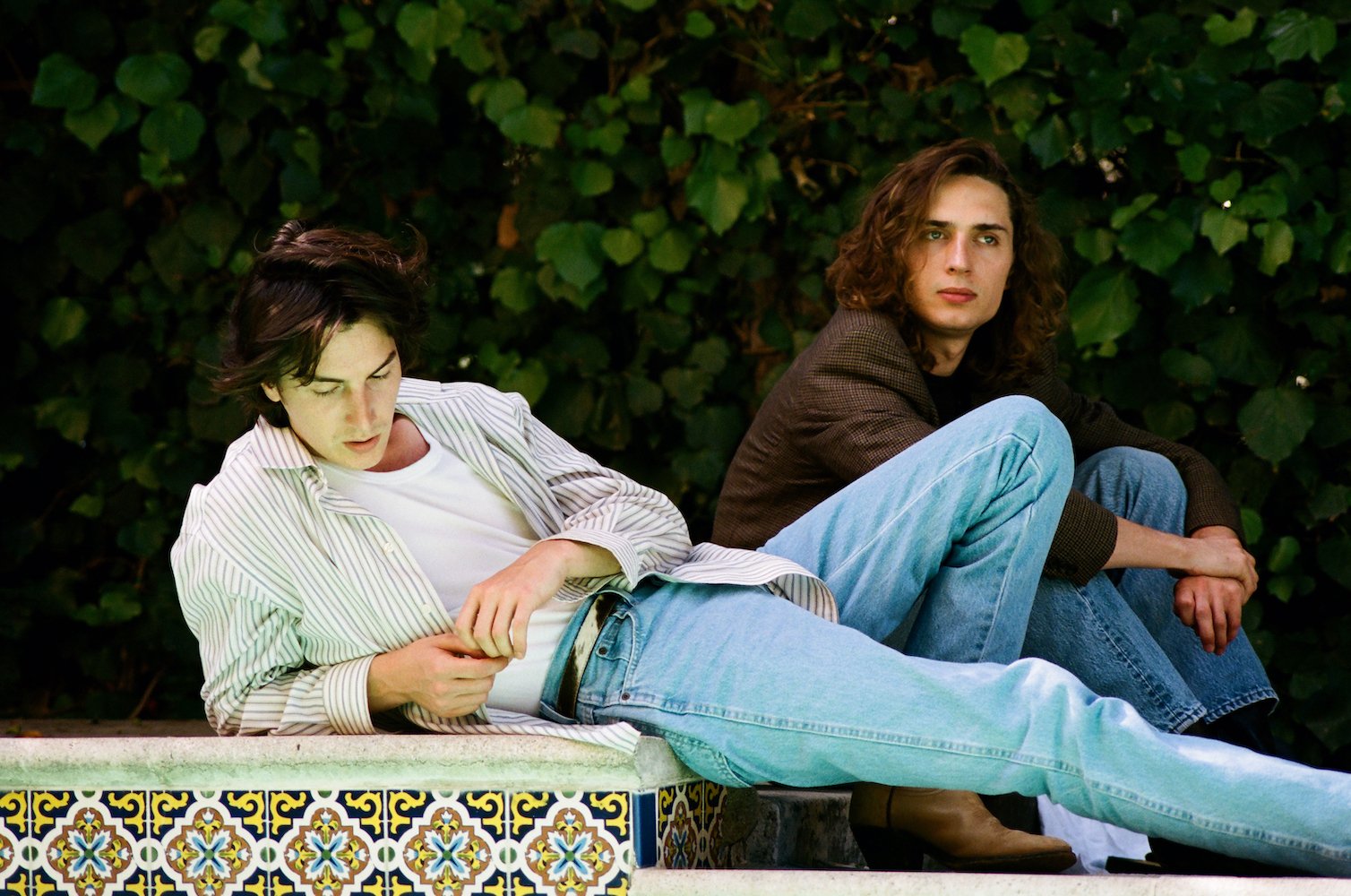 Kane Ritchotte and Malcom McRae are two music savants based in L.A. that recently combined their talents to form a new band called more*. Against a backdrop of rock and roll, the duo flex their ability to write clever and thought provoking songs over a two part EP aptly titled 1/2. I can’t understate: it is a powerful album. The first half released July 17th (stream below) and the second part is slated for October with Warner Records. We caught up with the indie rockers currently quarantined in L.A. by phone.

Mark Benjamin: Hi Malcome and Kane, I just finished the first half of your new two-part EP titled, ½. This is a great first EP. I’m sure it’s been a long time coming. When did you start writing this album?

Malcolm: The writing process was a span over three or so years. Kane and I were doing solo projects individually and had a few songs we had written and recorded separately. We met up and decided it was fun to write together and bring our songs together. So we finished ten songs over about three years.

M: It was suggested to us that we release music this way as a new band. We do still consider it one album. But in this day and age it’s more palatable for people to get to know you over a few doses of releasing music.

MB: Yeah, it’s not like pop music where you release a single and then another single, and another, and by the time the album comes out everyone’s heard it all.

M: We’re still figuring it out. We’ll find out.

MB: Malcolm is from Alabama. Kane is from L.A. How did you guys meet and decide to make a band together?

M: We met through a mutual friend at a bar, actually, in this area called Beachwood Canyon. It’s a better preservered part of L.A. In fact, my mom used to live there when she moved out here and she says it’s exactly the same, culturally, too. It’s a type of bar where you can go and run into a bunch of your buddies there or meet new people. It’s our second favorite spot.

Kane: We tried compiling a long list of what I can now recognize as the world’s worst band names of all time.

MB: So it was a process of thinking about what you wanted to call yourself?

K: Yeah, definitely. We were thinking well we’re going to be done with this album soon so we need the band to have a name. It’s hard these days because a lot of names are already taken. You’re a google search away from realizing a name isn’t an option.

I saw my girlfriend, who is an actor, sending an email to someone with a movie poster reference. I was looking at this email and one of the movie posters was called ‘more.’ It had a similar font and was all lowercase and so I showed it to Malcolm and we thought it would be a cool band name.

M: You know it’s kind of egotistical to announce yourself as more* but the lowercase sort of set thats off.

M: Or no more. We set ourselves up… all the headlines of the reviews will be like ‘Please, no more.’

MB: You guys have this great song called “God’s in the Details.” There are a few music videos for it, but I really love the one on the cell phone. I guess it’s a relationship coming together and then falling apart dramatically?

M: It is. Our good friend, Riley Keough and her partner, Gina, write and produce together – they do a number of artistic ventures. They came up with this idea in quarantine and we kind of just followed along with them. The entire concept and execution was all them. They did absolutely everything. They kind of showed up and did a couple bits and told us what to do. We love that video. It’s really cool.

MB: I love the ending where she’s crying, her makeup is all smeared.

M: Riley is a phenomenal actress. A really great talent. We love her very much.

MB: That song is pretty dense, too, in terms of lyrics. What was the inspiration for this song?

M: Kane’s life has been about music from age three so it’s sort of a rumination on his idol, which is music. There are all these little hidden references to his influences in there. There’s John Lennon, Bob Dylan, there’s Crowded House. The title reflects exactly what’s happening.

MB: Are you guys religious or is that a metaphorical God?

M: I grew up religious. I think both us have an undefined religion. I’m not atheist. I’m pretty agnostic.

Have you heard that Mel Brooks and Carl Ryner comedic bit? The 2000 year old man? Mel Brooks acts like he’s a 2000 old man and he’s getting interviewed and he has this New York accent. It’s hilarious. He’s asked, ‘what are your thoughts on God?’ And Mel Brooks responds by saying, ‘One day I was outside and a lightning bold struck Robert and we thought, ‘Oh, there’s something bigger than Robert.’

MB: I also want to ask you about “Elaborate Attractions.” It’s a great song and the music video is really trippy.

I got messages you sent me
Back when you were educating
Eight-pound hammer, hedge fund boys
With Alabama-Ivy toys

M: My dad was an investment banker. He passed away when I was eighteen, but that song revolves around and is based on some of his life. He studied classics at an Ivy league school and so the reference to Joseph Campbell, that’s what we took the video from. We wanted it to be an antihero’s journey. All 17 points of Campbell’s hero journey… we wanted to make them super menial tasks with an incredibly small reward for each task. It symbolizes what the song is about which is nature versus nurture.

MB: It has that L.A. gloom feel to it, too. Like that sort of chewing the fat feeling to it.

You mention some of your references as Jeff Lynne, Tame Impala, and Kendick Lamar, which I thought was an interesting, if not bizarre, trio.

K: We grew up on a lot of sixties and seventies pop and rock. It’s ingrained in our sensibilities. I feel like what happened, what is more often the case with people who are raised on music of a different era, is you kind of, it becomes difficult for them to identify with contemporary music.

We feel like there’s a ton of contemporary music that not only do we identify with, but it also really inspires us. I think that our influences ended up being all over the map. I think the conversations we have most about is what people are doing within the context of our times and what technology they’re utilizing and how they’re recording themselves.

Living in the moment

MB: You have to live in the contemporary moment, right?

M: You have to be a well rounded artist, too. I feel a lot of time musicians become very hard and niche and end up pigeonholing themselves due to the lack of influence outside their zone.

MB: There’s a lot to be said for playing your own instruments. I was watching an interview with Prince not too long ago. He said, ‘ah, the sampling has got to stop, you know, pretty soon they’re going to be sampling the sample.’

I think we’re living in that now.

M: Yeah. It’s funny how I feel. I’m always nervous whenever I have some sort of rejection of a contemporary kind of method or trend. I always worry that I will out myself as a dinosaur or a purist. I try to avoid it.

MB: Did you guys get to do any live shows with your new music before COVID?

K: We were definitely planning on this year to play live and tour as much as possible. We squeezed out a couple shows before we all got locked away, sent away to our rooms. But, yeah we ended way too soon. And we were just kind of getting into it. We managed to get a couple small shows out before quarantine.

I don’t know what it’ll look like when live shows come back. I don’t know what, when, or how people will kind of come back to doing concerts. I’m curious about it. I’m worried about it, too. But I’m also very excited to kind of hear the recorded work that people are going to be doing in the coming months as a response to the world and music and everything going on socially and politically right now. I’m hoping that it will breed a lot of new, great, music that is less superficial than the standard that we brought into this mess.

MB: Are you guys working on music during quarantine?

K: For sure. We’re demoing out two songs. We’re trying to find a vibe for a demo, which is difficult to pair down all those elements, but I think we’re having the most fun with writing for sure.

MB: It’s a really introspective time and I think a lot of people are getting things down that they wouldn’t otherwise be able to.

M: Yeah, absolutely. And also, I’m grateful for the outlet and you don’t need many resources to write music, you know? If we didn’t have that in this quarantine, I would be entirely morbidly depressed and unfulfilled. I mean, I don’t know how anybody’s survived. I don’t know how not everybody is writing an album right now.

MB: Well, but you guys have the sun in L.A. You have great weather all the time.

M: Yeah. But it can be a pain in the ass. You know how hot New York gets. It’s like that forever. In L.A., it’s like perpetual dead heat. It can stall your work ethic sometimes.

The first installment of 1/2 is out now with Warner records. Stream below.