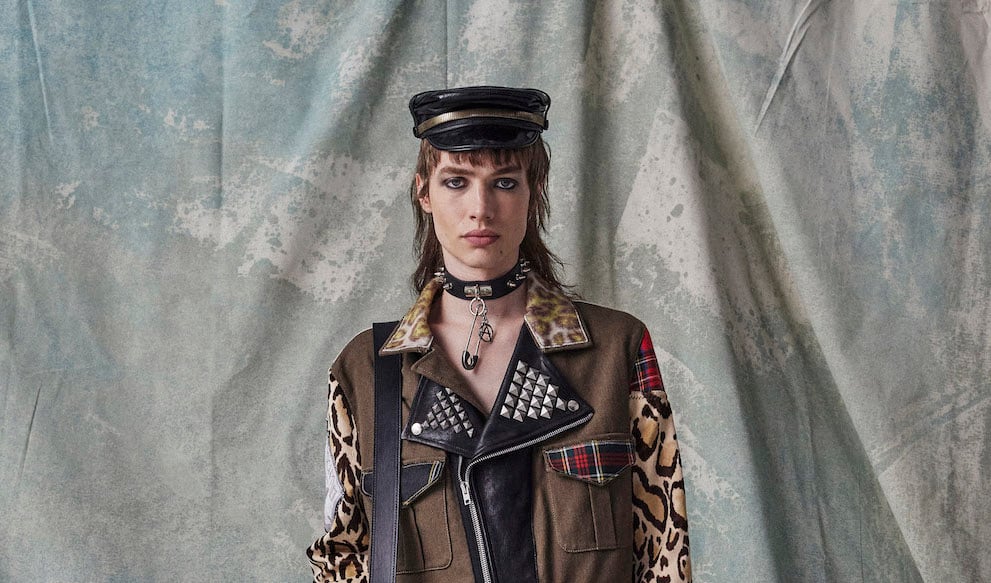 Moschino Pre-Fall 2023 Uomo is creative director Jeremy Scott’s modern vision of punk—though not one rooted, necessarily, in anti-establishment sentiment. More so, it’s a playful—and play-filled—take on the camaraderie and spirit of the word, and how the term has evolved to stand for something much broader and more textured in the 2020’s.

Punk, as he views it, is a character of fusion. Of going against the grain, but never adhering to or becoming one type. Of taking the chaos of the world, mashing it up, and making it one’s own in fit and form.

This viewpoint takes off with a patchwork Moto-trench hybrid, pieced together with tartan, military and leopard motifs, and studded for added effect. The collection progresses into more freewheeling joining: A wide and peaked lapel jacket reveals a Moto collar built in; a half-zip jumper features tartan-topped cargo pockets and grommets. A modified double-breasted leopard suit, tucked into high-calf patent leather boots, adds a retro reverb.

Punk-fueled graphics enter not-so-quiet riot, such as anarchy symbols, oversized safety pin accents, and an all-over money print. On this, George Washington’s face appears, styled with sunglasses and underscored by “Moschino” written in mint-mimicking font. At this stage, hints of grunge also come through: Shredded hem and wide-leg Bermuda shorts, an oversize cardigan and a slouchy striped car coat are all in the mix. A beret by Judy Blame and a decadent blue-flowered finale series of foiled leather pieces underscore the intermixed resilience and enjoyment.

Ultimately, Scott is portraying something of a band. A group of like-minded individuals drawn to the same interests, but with their own distinct manners and methods of dressing. It’s not about adapting or adopting another look in full. It’s about piecing it together, and seeing punk as fun.