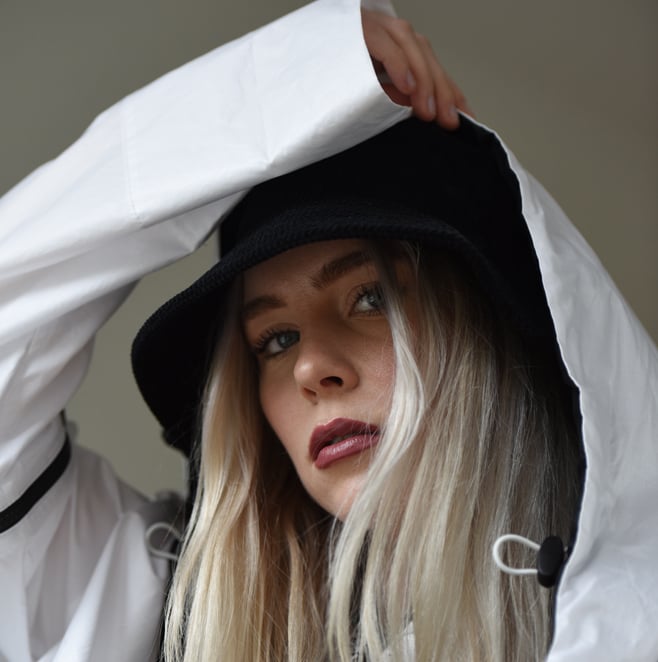 You might not know her name yet, but you know her songs. We’re of course talking about singer-songwriter, SHY Martin.

After the release of her 2018 debut EP Overthinking, SHY Martin has become a pop tour de force. In addition to her own music, she has written hits for artists like The Chainsmokers, Bebe Rexha, Astrid S, Kygo, Ellie Goulding, and Jess Glynne. Now the Swedish singer-songwriter has teamed up with the musical duo NOTD on their latest single, “Keep You Mine.” Rain caught up with the “Forget to Forget” singer at an exclusive photoshoot in New York to talk about her musical inspirations and the pressure of social media.

You grew up in a small town in the South of Sweden. How did you start writing music?

I grew up in a small town, which has about 500 inhabitants. I’ve always loved music. I started playing the guitar at 10 and played in a band when I was 12. I later studied at the music program in high school and continued my music studies after at a school called Musikmakarna. The school is located in northern Sweden.

Because the school is located in such a small town, there’s really not a lot to do other than making music. The second year of school I moved to Stockholm to do my internship. ‘The Ocean’ and ‘All We Know’ were written together with SHY Nodi on my couch in Stockholm and recorded in my wardrobe.

We had a gut feeling the song could be something The Chainsmokers might like. Because we didn’t have a manager or a publisher at the time, we decided we’d try to send the song ourselves and Googled to find their email. The day after, we got a reply that they liked the song and wanted to try it out. A few months later it got released.

So this is how you got signed?

I had a record deal in Sweden at 17 but never put out any music. In 2017, I decided to sign a publishing deal with BLNK music – at that time a new publishing label founded by some friends I already worked closely with.

I’ve always been interested in how the music industry works and what you can do and create yourself. I love being a part of the whole process and having control, so signing to an indie label was a decision that felt right for me. I also value being close to the ones I work with.

Do you spend a lot of time on social media?

Kids growing up these days following accounts where everything is perfect and thought-out and they don’t even question it before consuming it. You get so easily tricked by social media. It’s so easy to get trapped, putting worth to ‘likes’ and feeling bad about yourself comparing yourself to others.

Do you feel pressure of maintaining a certain image on social media?

Some days I do. It’s hard not to compare and it’s hard to avoid those thoughts about not being good enough or interesting enough or whatever.

For me it’s important to not only show my best sides. I feel like I have that responsibility to the people following me, especially the younger ones growing up in this world of social media.

Let’s go back to music for a bit. What would you say is your favorite lyric that you ever wrote?

‘All we know’ is definitely one of the lyrics that I relate to the most.

Also ‘Lose you too’. That’s a special one to me.

I often get the question how come so many of my songs are about love. I just feel like it’s the strongest feeling. Everyone has experienced heartbreak and everyone has been in love at some point.

How do you approach collaborators for a song?

If me or my team has an idea for a song, we do our best to get the artist to hear it. And that process looks different from time-to-time.

When you write a song, do you already know which artist you will send it to?

No, I don’t but I often get an idea of who I think it could be for by imagining different artists singing it. I feel like that makes me inspired during the writing process.

You just released a collaboration with NOTD. How did that come about?

I wrote the song together with some friends last summer and sent it to NOTD. They liked it right away and made a production on it. I love working with them and I’m so happy we got to release one more song together. I co-wrote their first single “I wanna know.”  Also, we’re great friends.

Do you like performing your songs live on stage?

I do, but I am struggling a lot with stage fright even though I grew up playing in a band. Doing my first headline tour this spring I was so nervous. It took some time to take in that people were actually coming to the shows to see me even though it was a headline tour, ha.

I love being in the studio but the instant feedback you get from playing live and meeting the people listening to your music is magical and it gives you this crazy high. It’s almost addictive. I can’t wait to go on tour again!

Since love is an important subject in your songwriting, how would you describe what love is?

I feel like everything we do is motivated by love, which is why everyone can relate to it.