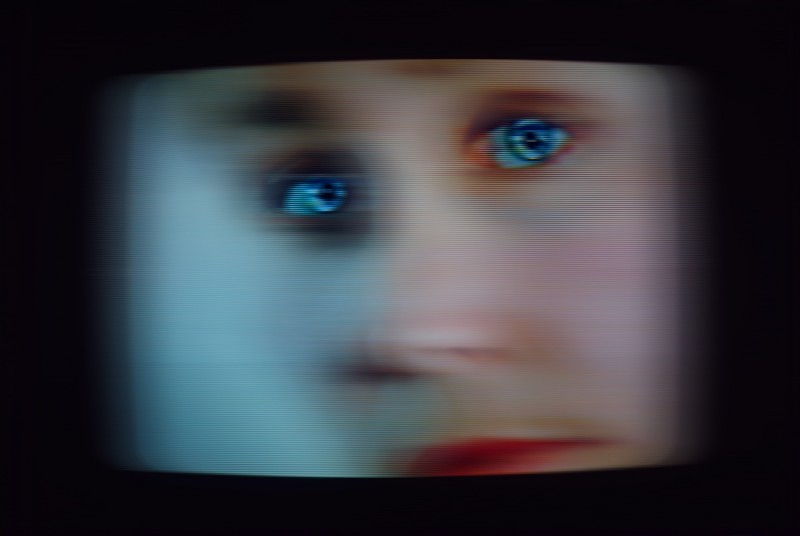 Multi-media artist Lynn Hershman Leeson (b. 1941, Cleveland, OH) is shown on the ground and second floors of the museum. Her work is an extensive and exhaustive study into notions of the self and technology long before it became reality with the advent of social media.

Her later work, “The Infinity Engine (2014– present),” similar to her earlier cyborg work, “Cyborg” (1996– 2006), investigates the relationship between the real (in the later case, genetics) and technology (gene editing). This ultimately led her to code and store all of her work into DNA – the vial becomes a work prominently displayed behind a sealed laboratory door in the exhibit.

She also, in collaboration with a Swiss scientist, created her own antibody aptly named the HERSHMANLEESON antibody which was genetically constructed from her name. Incredibly, it had a functional role in cell health just as an artist does against toxins in a social environment. As Hershman Leeson posited in 1998:

“Imagine a world in which there is a blurring between the soul and the chip, a world in which artificially implanted DNA is genetically bred to create an enlightened and self-replicating intelligent machine, which perhaps uses a human body as a vehicle for mobility.”

Ed Atkins‘ (b. 1982, Oxford, United Kingdom) work explores the relationship between the “corporeal and the digital, the ordinary and the uncanny” by way of CGI, writings, and sound montages. He reconsiders what human communication looks like behind the everyday curtain of technology that we are bound by. Installed on the Fourth Floor gallery, “The Worm (2021)” is a CGI film created during the pandemic that questions the limits of representation and human relationships.

“I think of it as augmented and simulated sentiment, comparing and supplementing it with those objects and materials we might more familiarly expect to surrogate our love.”

On the Third Floor, Wong Ping (b. 1984, Hong Kong) shows a series of short animated films. The ingenious artist takes the viewer through a series of surreal tales and fantasies full of horror, humor and the absurd. Self taught, Ping’s work focuses on the taboo, societal boundaries, and perception through clever and poignant social commentary. His films on display include “An Emo Nose” (2015), “Who’s the Daddy?” (2017), and “Sorry for the Late Reply” (2021).